One of the most iconic popular images of Mongolia is that of nomadic herders, riding horses and living in gers (yurt tent-houses). The other is of powerfully built Mongolian wrestlers in traditional costume: a red or blue zodog (open-chested shirt), shuudag (heavy-duty briefs), wrestling boots, and a pointed Mongolian cap. As nomadism declines, the work of preserving Mongolia’s traditional culture is being done by the country’s wrestling coaches.

At first glimpse, Ulaanbaatar is not terribly different from the capital cities of other former Soviet satellites. There are coffeeshop chains, private hospitals, and a stock exchange, as well as tall office buildings that house banks and mining companies. With a population of roughly 3 million, Mongolia boasts around 80 universities, including about 10 international university programs in business, IT, and engineering. Less than an hour’s drive from the city limits, however, the scenery explodes into breathtaking, rolling steppes of the deepest green, dotted with gers and populated by families of herders. 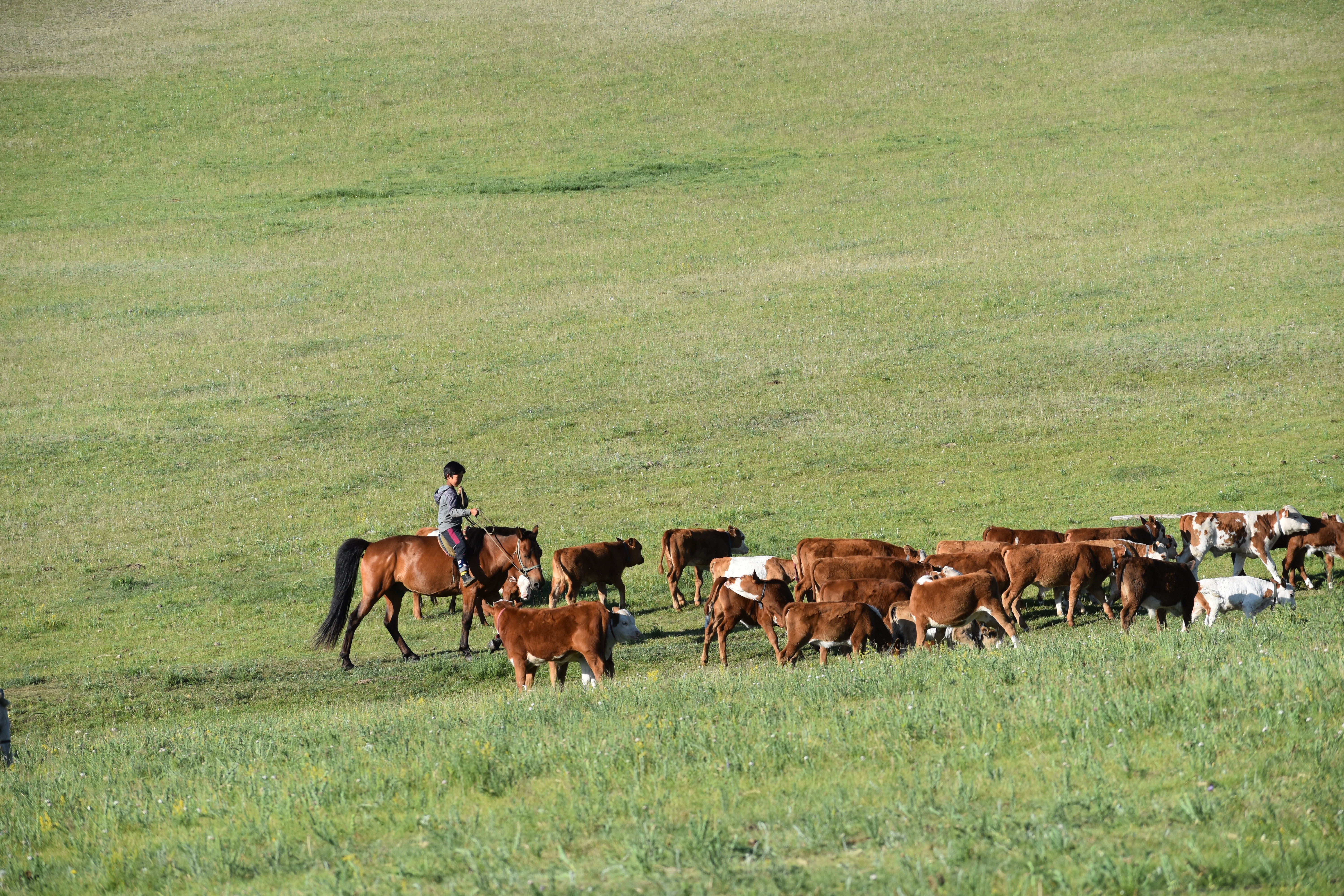 It takes a minimum of 100 to 200 animals to support a family. Historically, Mongolian nomads moved four or more times per year, driving their flocks to better grazing grounds. Throughout the year, they live in gers made of felt, burning coal to survive temperatures as low as minus-50 degrees Celsius.

In winter, they bring their animals closer to the mountains, to protect them from storms. Water has to be collected from wells or rivers, which may be a mile (1.6 km) from the encampment. In winter, ice is broken, carried, and boiled for drinking water.

A family in a ger uses 10 to 20 liters of water per day for drinking, cooking, and washing. The average shower for a city-dweller, by contrast, utilizes 20 gallons (75 liters).

The herders’ day starts at 5 a.m., when teenage boys ride out to find the horses that were set loose for night pasture. They herd the horses back to the corral, and begin the arduous task of milking the mares. To kill time between milking cycles and other tasks, boys wrestle. Most begin wrestling by the age of 5, and both boys and girls begin riding horses as young as 3 or 4.

In the annual Naadam Festival, the biggest holiday of the Mongolian calendar, children of both genders as young as 8 ride horses in a 15 km to 30 km point-to-point race.

Herders ride horses, or sometimes motorcycles, nearly all day while herding and protecting their flocks. After years in the saddle, they develop powerful thighs, double or triple the size of city-dwellers. 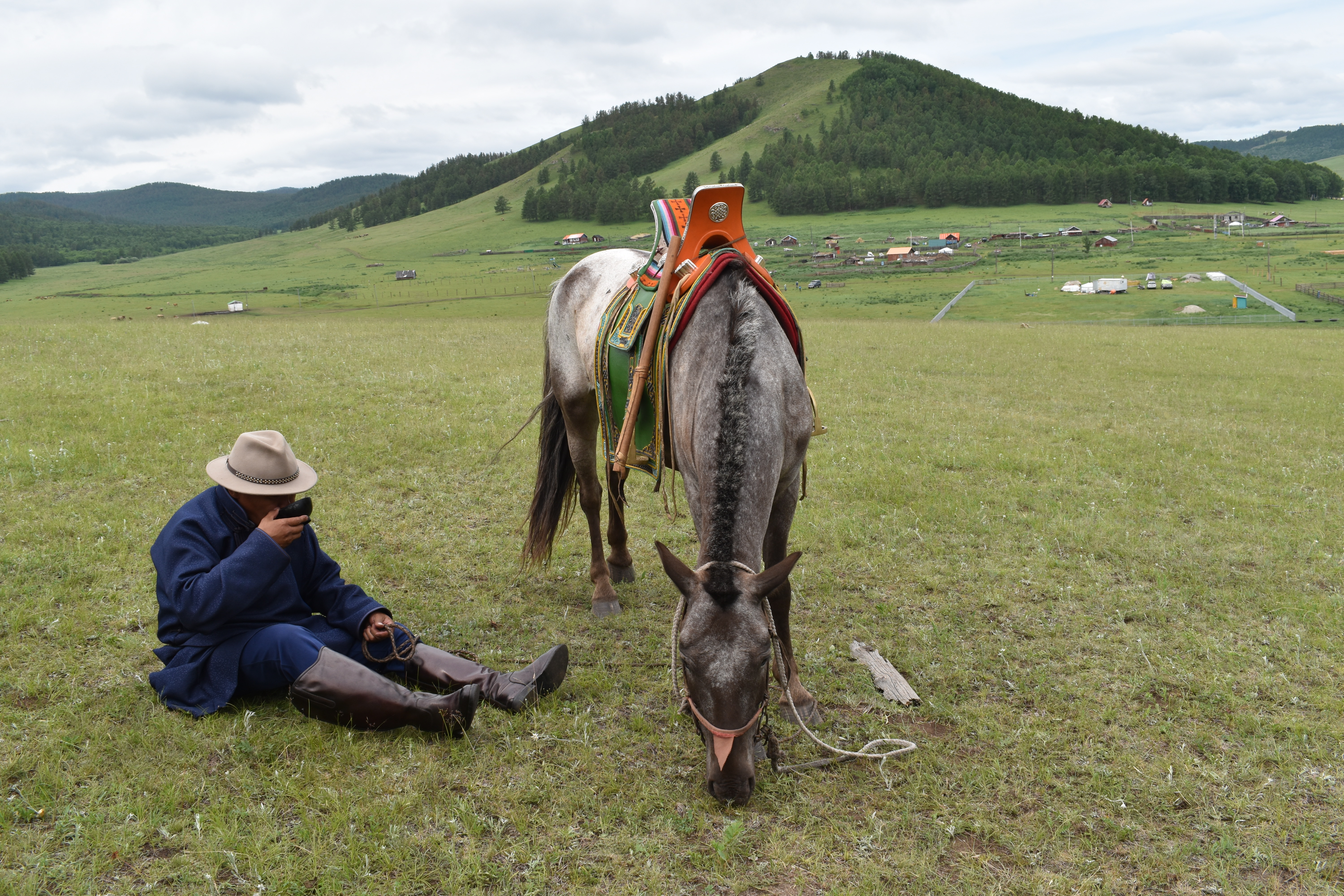 In spring and early summer, most of the baby animals are born, during a very busy two-to-three-month period. Afterwards, the foals and calves must be closely watched, to ensure they get enough nutrition and do not become food for wolves and other predators.

In summer, the mothers have to be milked, once or twice daily for cows, but as frequently as eight times per day for horses. Before milking horses, the mares have to have a halter put on them, which often involves wrestling and pinning them. Some mares are used to the cycle of milking, and go along peacefully. Some fight, and have to be controlled by three men or boys, so their feet can be secured. And this process could be multiplied by 40 or more mares, depending on the size of the herd.

In the spring, hair or wool is removed from the sheep, goats, camels, and yaks. In the fall, animals are sold or slaughtered for food. Through a combination of the sale of wool, cashmere, meat, and milk, a subsistence herder family typically earns between $4,000 and $5,000 per year.

The herder’s life is extremely hard work, and the economic payoff is small. It is no wonder that over the past 20 years, the number of herders has steadily declined. The number of animals is actually increasing – but this is because big, commercial herding operations are replacing the small herders.

At the same time, it seems that herding parents are recognizing the privations of the nomadic life and are sending their children to the cities to attend school. Due to increasing parental support for education, the dropout rate by age 14, which was once extremely high, has declined to 1 percent. Nationwide, the high school graduation rate is 94 percent for girls and 91 percent for boys, which is only slightly lower than the U.S. which has a graduation rate of  94.5 percent.

Herder families spend years’ worth of their income to send their children to university, most of whom do not return. In some surveys, as many as 100 percent of parents said that they wanted their children to remain in the city or go abroad, seeking a better life, rather than returning to herding. 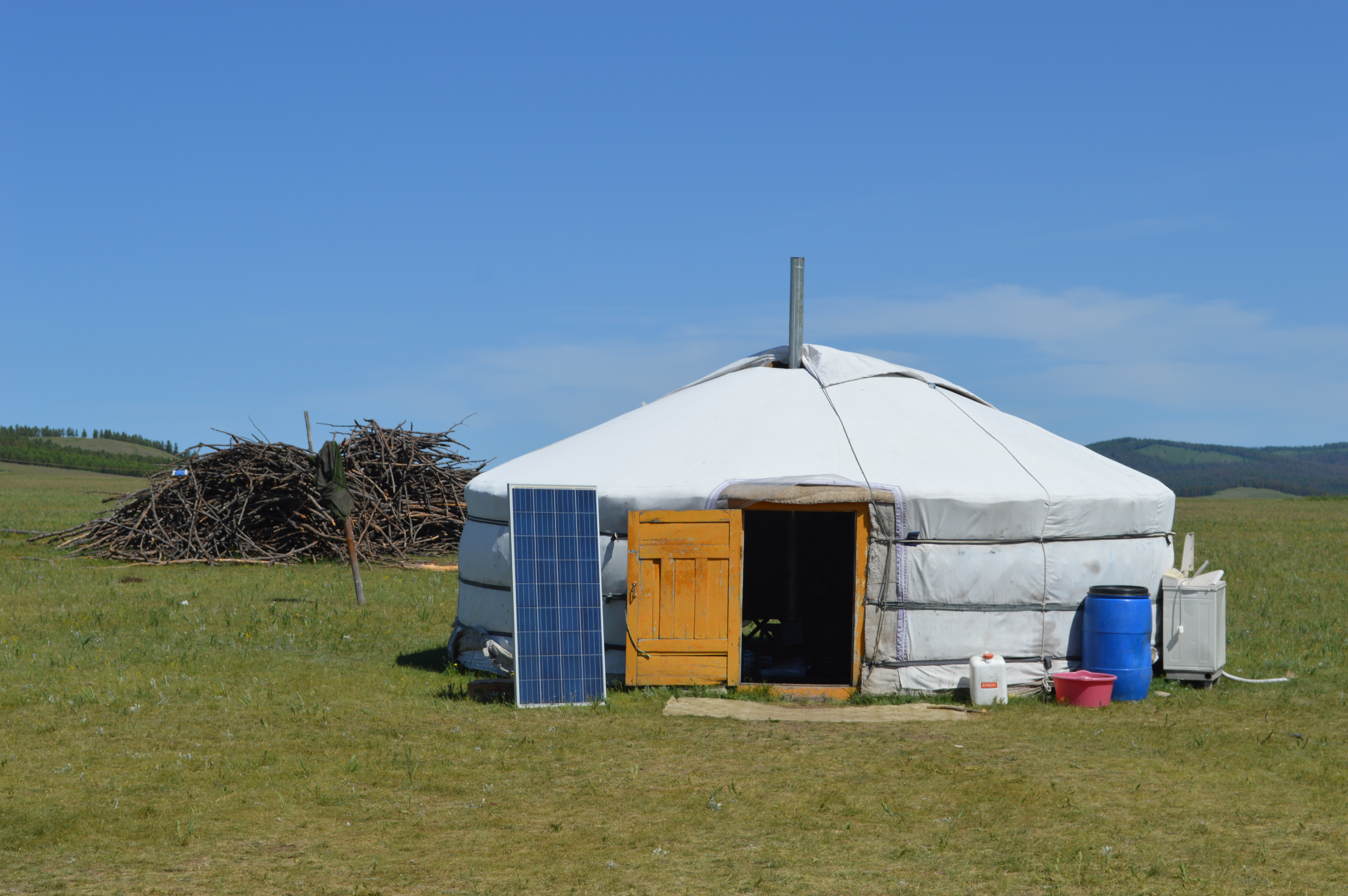 Byambarenchin Bayaraa, wrestling coach at the Mongolian National University of Education, explained that wrestling continues to thrive alongside modernization, and that “Mongolians say that they will make their children to be wrestlers.”

He went on to say that wrestling is in Mongolians’ DNA. This sentiment was seconded by Budeebazar Adiyakhuu, coach of Avarga Wrestling Club, who said: “The genes of Mongolians are different. We still have that Mongol blood. So, we always like to wrestle, fight, struggle, and compete.”

Wrestling is part of the culture of Mongolia, according to Bayaraa, because wrestling is not a team sport. The wrestler, like the nomadic herder, is independent. He is “not looking at the teammates” and does not “need to ask anyone for strength or support.” 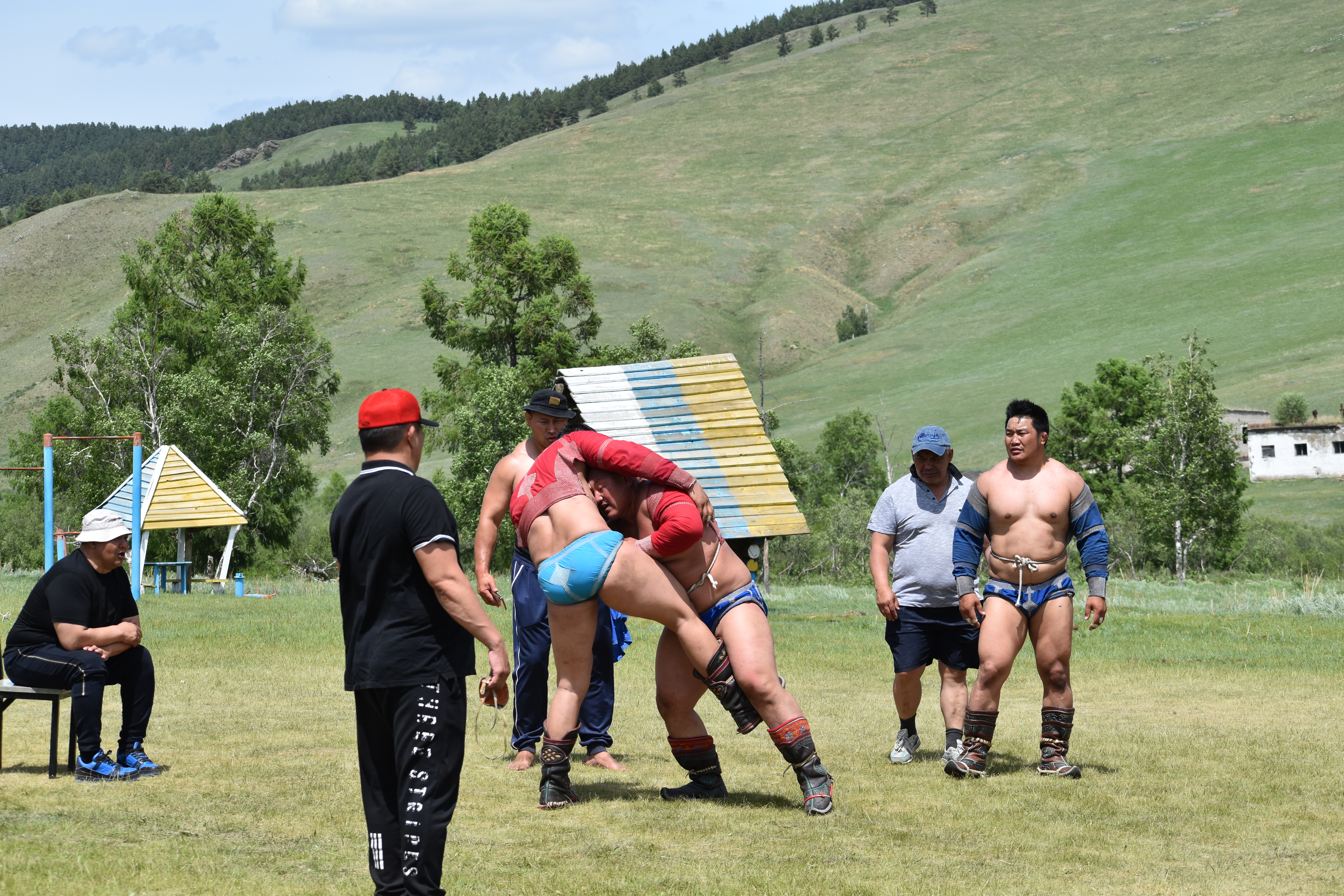 Wrestlers at Suuj training camp, about 75 kilometers from Ulaanbaatar, preparing to compete in Naadam. Photo by Antonio Graceffo.

The coach of Nine Flags Wrestling Club, Eruult Suhbaatar, highlights the strong lineage of wrestling in Mongolian families, “Seventy percent of the wrestlers have some kind of family member who is a wrestler, whether it was their grandfather or father. There is definitely a connection with the ancestors.”

In addition to believing that wrestling is a significant component of Mongol identity, the coaches also use wrestling as a vehicle to convey traditional culture to young people. According to Eruult, “There are morals that need to be taught. Even daily routines, such as how to sleep and shower. A coach also teaches them to avoid alcohol, bars, and violence.”

The relationship between the wrestler and his coach is very similar to the relationship between a master and an apprentice, according to Bayaraa. “In Mongolia, there is such a discipleship that is formed between the coach and athlete, such a bond… which makes the wrestler dedicate everything to his teacher: their body, language, mind, everything.” In return for the students’ devotion, Bayaraa passes on wisdom handed down for generations.

The ancestors “are smarter than I am, because they have experienced both happiness and misery before me,” he said. “So, I have to respect their age and intelligence.” 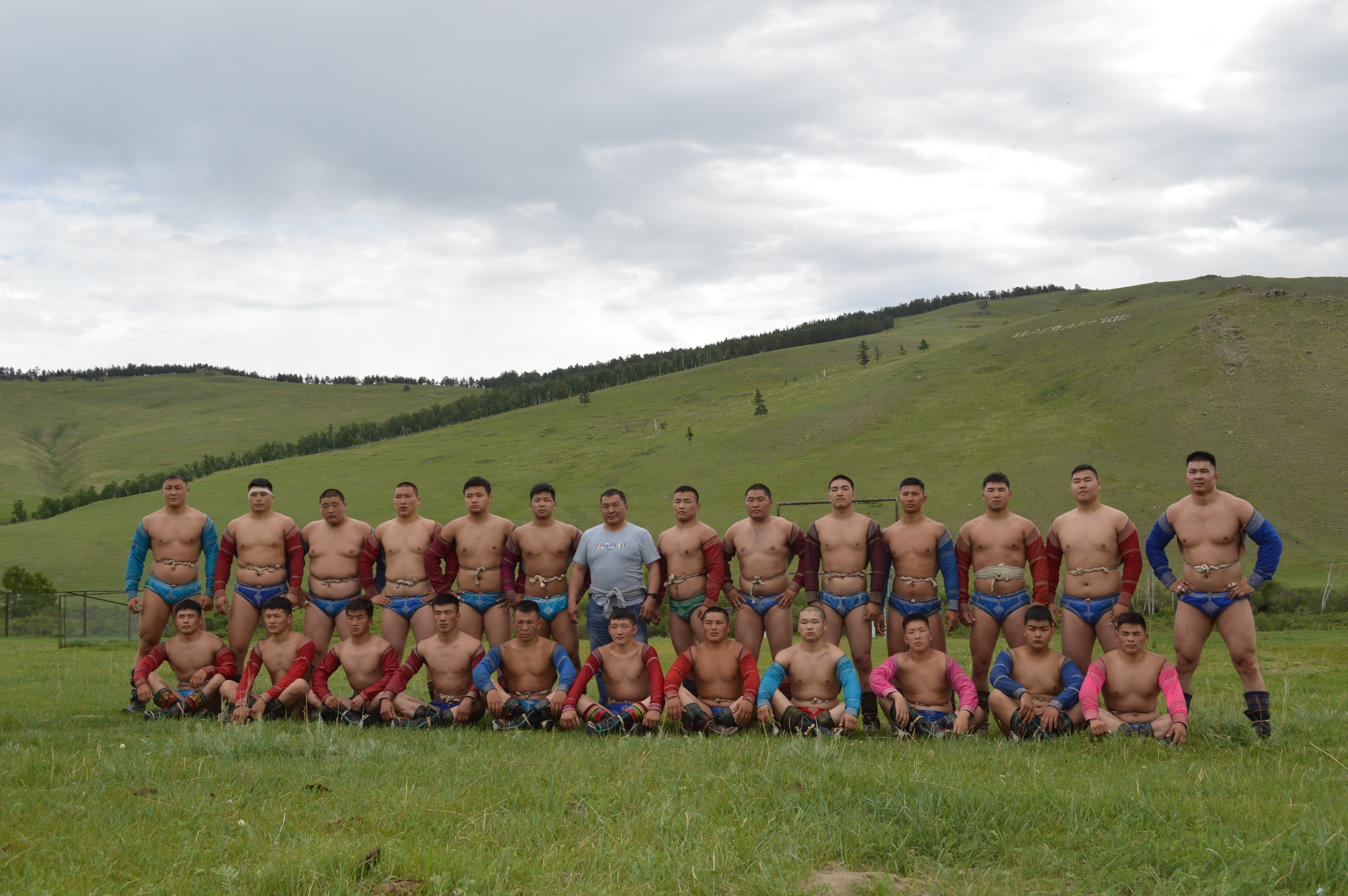 Wrestlers at Suuj wrestling camp, preparing for Naadam. They generally live in camp, beginning in June, for at least a month before National Naadam, which is held July 11-15. Photo by Antonio Graceffo.

Amarbat Togtokhbayar, coach of Zaan Wrestling Club, also teaches his wrestlers traditional ethics. “There is definitely talk of morals outside the wrestling mat, as “only 1 out of 200-300 kids goes pro.” For this reason, he encourages his students to acquire job skills. “I do not want my students to only have wrestling in their life, studies must also be taken seriously. If not, they will hit a dead end, with no studies and no profession in wrestling.”

Today, although fewer Mongolian young people grow up learning the traditional culture and values of herding, many will still receive these lessons from their wrestling coaches. Most will not become professional wrestlers. They will go on to become tradespeople, accountants, or computer specialists. Wrestling will be a fond memory of their formative years, and one that leaves them with a deep appreciation of traditional culture, which they are likely to pass on to their children, ensuring that Mongol culture will continue.

How a sparsely populated nation came to dominate Japan’s most well-known traditional sport – including an epic comeback story.

Liu Yanping is the latest in a series of high-level officials to fall before the upcoming Party Congress.

Sri Lanka has always has a sizable diaspora of migrant workers. But now many people are leaving not just to better themselves but out of sheer necessity.

The former prime minister’s all or nothing approach to the abduction issue may have stymied progress in the unresolved North Koran abductions of Japanese nationals.

And so ends a prosecution that many human rights activists characterized as persecution.