China maintains close trade and economic ties with the countries of the former Soviet Union, including the provision of concessional loans. To put this into context, it is essential to understand the overall situation regarding the sovereign debts of these countries, including the outlook for the coming years. Figure 1 shows how sovereign debt as a ratio of GDP has evolved since the mid-1990s, along with a forecast until 2027, for the Central Asian republics. 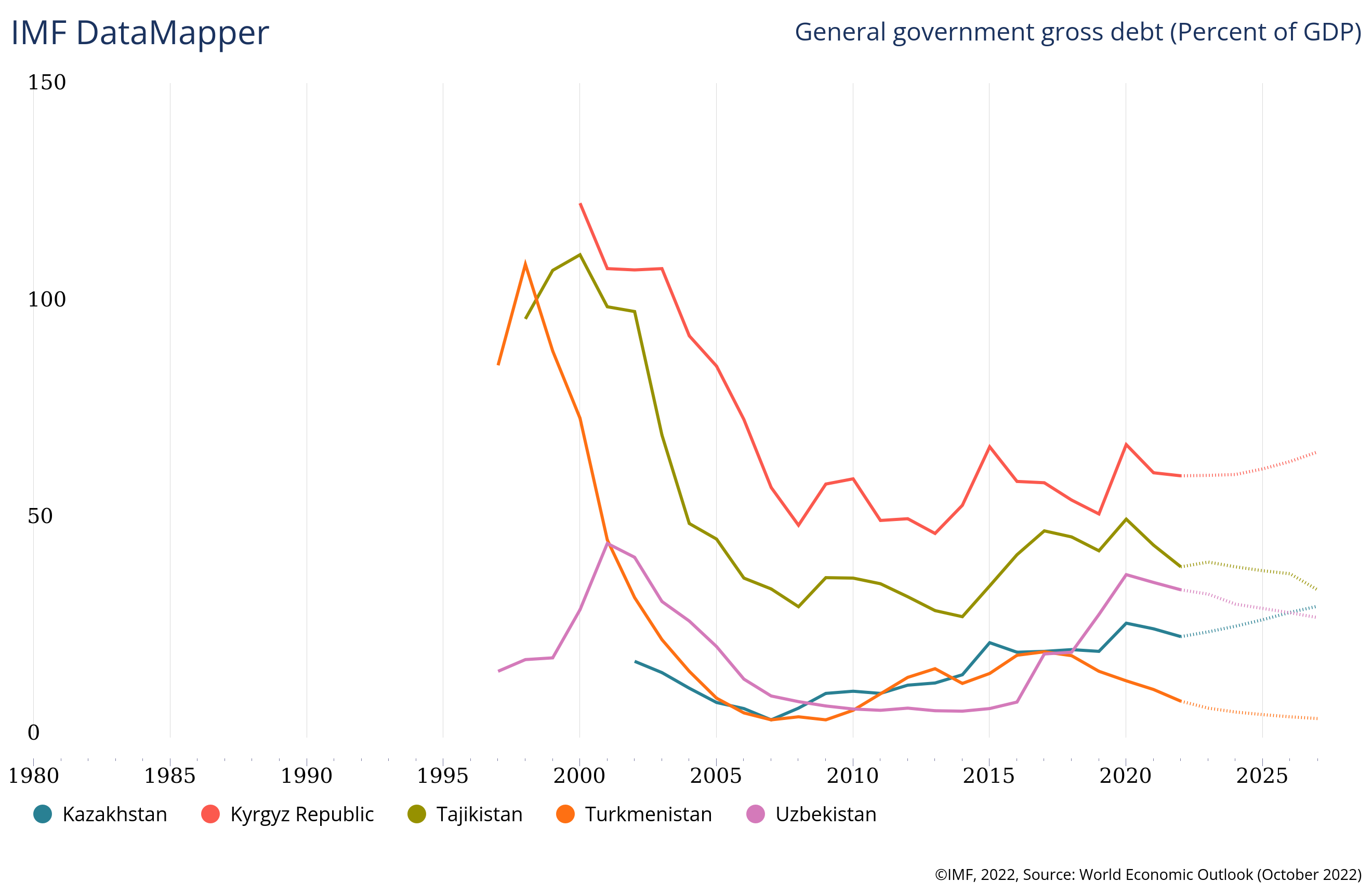 In the 1990s, almost all the former Soviet republics were forced to take loans from international development institutions such as the World Bank and the International Monetary Fund (IMF). Some issued sovereign debt, such as government bonds. In a few countries, sovereign debt greatly exceeded sustainable levels.

For example, sovereign debt exceeded 125 percent of GDP in Kyrgyzstan in 2000, and 110 percent of GDP in Tajikistan in the same year. Simply put, in the 1990s these countries could not independently maintain the balance of payments and stability in socioeconomic development. In this regard, by applying to the Paris Club of creditor countries, Kyrgyzstan achieved a partial write-off and restructuring of its sovereign debts in March 2005.

But even more surprisingly, in the late 1990s sovereign debt exceeded 110 percent of GDP in Turkmenistan and Russia, both of which were heavy exporters of hydrocarbons. In August 1998, Russia had to default on servicing its domestic public debt, which undermined its reputation in the capital markets for a long time.

From the chart above, however, one can see that from the early 2000s, there has been a healthy and sharp drop in sovereign debt-to-GDP ratios across Central Asia, which was associated with the rapid economic growth and the competent management of sovereign debt of these countries. Despite the non-sustainable level of debt in the early 2000s, except for Kyrgyzstan, none of the Central Asian countries approached creditors with a request to restructure debt.

An attempt by the government of Kyrgyzstan to restructure debt yet again under the IMF and World Bank’s Highly Indebted Poor Countries (HIPC) initiative even led to mass demonstrations in Bishkek in 2006, demanding the government withdraw from the program. People did not want the country to be on the list of hopeless jurisdictions that could not pay their debts. Mindful of this reaction, the Kyrgyz government introduced a legislative norm under which the sovereign debt-to-GDP ratio should not exceed 60 percent, which is in line with IMF recommendations.

The structure of external loans in Central Asian countries varies considerably. The structure of sovereign debt of Kyrgyzstan and Tajikistan, both low-income countries, is dominated by obligations to international financial institutions as they offer concessional financing. They provided 40 and 36 percent of the total loan portfolio for Kyrgyzstan and Tajikistan, respectively.

That said, China remains the primary source of credit in the region, providing loans with a preferential rate of around 2 percent. Its share in the external debt of Kyrgyzstan and Tajikistan in 2020 was 45 and 52 percent, respectively, the equivalent of more than 20 percent of their GDP. However, Kyrgyzstan and Tajikistan’s debt to China has stabilized over the past few years and even begun to decline.

Kyrgyzstan and Tajikistan are especially reliant on external debt; such obligations which make up 77 and 86 percent of their total debt, respectively. The situation is different in countries rich in natural resources. Loans from China account for 16-17 percent of the GDP of Turkmenistan and Uzbekistan. In comparison, Kazakhstan’s figure is the lowest at 6.5 percent.

It is still more lucrative to attract funds on international markets. In recent years, the government of Uzbekistan has also begun to attract external loans. According to its Central Bank, the country’s total external debt as of July 1, 2020, reached $27.6 billion, and compared to the beginning of 2020, the volume increased by 12.7 percent. Turkmenistan currently refrains from attracting external loans, except for Chinese ones. Unlike Kyrgyzstan and Tajikistan, Kazakhstan mainly attracts financing from private investors in foreign markets. Its leading investors are the United States, Russia, Switzerland, and China.

Interestingly, in September 2017, Tajikistan raised $500 million from its first sovereign 10-year international bonds for the first time, at a coupon rate of 7.125 percent. The deal was designed to finance the construction of the Rogun HPP since the country was unable to attract loans from international financial institutions for these purposes.

All post-Soviet countries expect accelerated economic growth in the coming years. Correct or erroneous management of public finances can either accelerate or slow down such a process. All the recipients and their donors should pay special attention to this problem.

Russia’s War in Ukraine and Its Impact on Central Asia

The war’s negative impacts on regional economies outweigh any incidental benefits, and Central Asians know it.

Economic Resilience in Central Asia Amid Russian War in Ukraine

On the back of high remittances and oil and gas revenues, the outlook for Central Asia’s economies has improved. But it’s not all good news.

At the EU-Central Asia Economic Forum, the EU kept its rhetoric uncontroversial. However, Central Asian countries signaled they may respond well to more ambitious EU goals.