Like so many other people in Tokyo, I head out of the city at this time of the year whenever I can. One short trip was to a ‘dog onsen (spa)’ on the Izu Peninsula where we could relax with our miniature schnauzer, Momo. The next trip in early July was to Japan’s third-largest city, Osaka, most famous for the business acumen of its residents. It’s funny. Despite it not being as bustling a metropolis as Tokyo, over in Osaka, people don’t ask, ‘How are you?’ when they meet you. They ask, ‘How’s your business?’

The reason for my trip was Art Osaka, where we exhibited work from Gakushi Yamamoto, Joji Shimamoto, Giang Nguyen and Jun Ogata. It was the 10th year for this art fair and the fourth year it was held at the beautifully restored Dojima Hotel.

If you’ve never been to one of these hotel art fairs, I highly recommend it—especially if you are a starting out as a collector. Each gallery rents a different room in the hotel and shows the work from their artists in that room. We were one of more than 40 galleries exhibiting in Osaka. You can see a lot of art in a short period of time.

At Art Osaka this year there were works from about 100 different artists, and the best part is that most of them are from Japan. And as an added bonus, since it all takes place in a residential type of setting, you can imagine what the work would look like if you had it in your home. In the room for our gallery, we hung art over the bed, above the TV, in the bathroom and we put a sculpture on the desk to answer the question we often hear: ‘Where will I put it?’

These days in Japan, you’ll have to go to the Kansai region for this kind of art fair, which is also held at hotels in Kyoto and Kobe. (Art Agnes which, was a similar kind of show at the Agnes Hotel in Tokyo, held its final show in 2009.)

The atmosphere in these hotel art fairs is more akin to a treasure hunt than a visit to a white cube gallery space or a big art fair held in a convention centre. As you go from room to room, you never know what you’ll see next. It’s easy to get into a daze and you might forget where you saw something that you like.

I like to see what other galleries are showing at these hotel fairs. I get around early and take a quick look into every room and write down the room numbers of the ones I like best. I then go back to these rooms and galleries to take a closer look at the work and talk with the gallerists and artists. 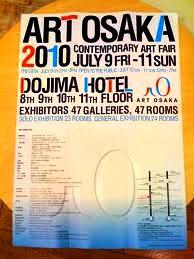 This year at Art Osaka, the number of visitors was the highest ever and so many of the works sold for less than 100,000 yen. It’s a far cry from the scene in Hong Kong where there is huge competition for works by the famous Chinese artists like Zhang Xiaogang and Yue Minjun that sell for hundreds of thousands of dollars.

So next week, I’ll write about some of the galleries I liked best. Art Osaka is over, but you can still visit them in their gallery spaces.

In Search of New Japanese Artists

Art is a reflection of society. Does a lack of emerging talent from top art schools reflect a passionless Japan?