Arms races, naval or otherwise, get a bad rap. They are usually regarded as the military expression and consequence of the existing state of international relations, but they can also develop a momentum of their own, wasting money, exacerbating already tense relations between states and threatening to destabilize whole regions. Instead of reflecting policy as Clausewitz reminds us the military should do, arms racers determine it.  All too often, moreover, they seem to make conflict more likely.

In the Asia-Pacific region many media outlets and pundits fear that a naval arms race is indeed developing and lament its possible consequences. It is not hard to see why— Whether it is Malaysia’s Scorpene submarines, Vietnam’s Kilos, India’s unprecedented naval building program or China’s new carrier the Liaoning and its carrier-killing ballistic missiles, naval modernization across the region is producing, if not always an overall increase in numbers, then at least substantially more impressive offensive and defensive naval capabilities.

And all of this is coinciding with, or even produced by, rising maritime tensions in the East and South China Seas. There are more narrowly focused tensions too, with analysts especially debating the dismayingly competition between China’s “counter-intervention” strategies and capabilities, and the U.S.Air-Sea Battle construct. Vietnam’s Kilos can also be seen as a more modest version of an anti-access/area-denial (A2/AD) strategy. These examples all suggest a worsening competition between “offensive” and “defensive”capabilities.

But is all this really developing into a naval arms race similar in style (and potentially effect) to the Dreadnought race that took place between Britain and Germany before the First World War – and even if it is, how serious might its consequences in the Asia-Pacific Region actually be?

While the answer to this question partly depends partly on how one defines a naval arms race, there are some major differences between pre-war Europe and the situation now. Most obviously—and with some exceptions like China, Singapore, and India— Asian countries today are devoting a far smaller proportion of their national treasure to defense than did Britain, Germany and the other countries of pre-war Europe. In general, naval armaments are making much slower technical advances than was the case a century ago, with acquisition programs around the area being more incremental, deliberate, and less determined by transformational technology. It is hard to think of a modern equivalent, for example, of HMS Invincible, brand spanking new and revolutionary when commissioned in 1909 but obsolescent when sunk at the Battle of Jutland seven years later in 1916.

Compared to then, technological transformation now is much steadier, and the importance of maintaining an edge over rivals more debatable, given the rise of asymmetric technological/political/legal alternatives and strategies. Crucially, few national leaders, diplomats, or even sailors talk in arms race terms, and they certainly do not justify their efforts by the need to “get ahead.” On the contrary policymakers make every effort to avoid publically naming possible adversaries that they need to build against. 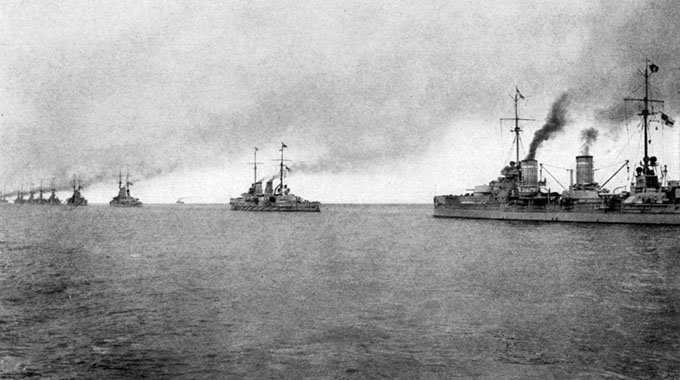 This was not the case in Europe before WWI when some politicians did not hesitate to single out adversaries and warn of the dire consequences of falling behind them militarily. Others, on the contrary, conceded their countries were in an arms race and warned of the catastrophic consequences it was likely to have, unless it was stopped. Particularly in the years 1909-12, there was, with good reason, an air of imminent disaster.

Nor did Europe have the kind of compensating institutional arrangements that draw nations together rather than drive them apart. For all the limitations of the “Asian way,” increasing levels of economic interdependence and transnational regional structures like ASEAN restrain violate competition. They also facilitate cooperation between regional navies against common threats such as maritime crime in its various forms (piracy, drugs , human trafficking and so forth), hold innumerable bilateral and multilateral exercises and operate side by side in dealing with humanitarian and civil disasters (the tsunami relief operation of 2004). Although there were such acts of naval togetherness amongst the European navies of the period before the First World War, they never became as routine as they currently are in the Asia-Pacific.

This not to say that everything in the naval garden is rosy, for it certainly is not. Any day in the disputed East and South China Seas could easily generate an incident that risks turning mild competition into a full-blown international crisis at sea. All the countries now investing for the first time in submarines – a difficult and demanding discipline – could well be the victim of an accident. The oil exploration rigs proliferating around the East and South China Seas are likely, to judge by events in more tranquil places elsewhere, to be the scene of a maritime disaster, sooner or later. Any of these could be really difficult to handle in ocean areas where ownership is in dispute and nationalist feeling rising– and, sadly, this applies to a great swathe of the western Pacific. All in all, what’s happening is not a naval arms race at the moment, but it is far from impossible that the naval modernization process we see around the region could turn into one.

Several factors increase the likelihood of this. First the high levels of secrecy in regional naval policies. This near total lack of transparency about the true extent of individual naval acquisition programs and the intentions that lie behind them force naval planners to operate on worst case analyses. Nor is this much moderated by institutionalized arms control and arms usage procedures. The complete failure to operationalize the 2002 Declaration on the Conduct of Parties in the South China Sea after more than a decade, the paucity of real working hot-line arrangements and Incidents at Sea agreements all illustrate the problem. And then there is the growth of social media and the committed “netizen” all too ready to give vent to nationalist sentiment over the latest spat in the East and South China Seas, reducing their government’s capacity to maneuver and its often already fragile ability to keep events under control.

A modern version of the “Dreadnought fever” that gripped Europe before the First World War is not yet evident. That being said, it would take a brave analyst to rule out this eventuality in the face of the cyber-sparring that attended the Scarborough Shoal crisis in 2012, or the ramming incident that took place in the Senkaku/Diaoyu islands in 2010. For such reasons, sailors and diplomats in the Asia-Pacific region should be continually alert to the risk that today’s naval modernization might just, despite their best intentions, turn into tomorrow’s arms race. As a result the military means might indeed overwhelm the political ends.

Geoffrey Till is a British naval historian and Professor of Maritime Studies in the Defence Studies Department of King’s College London. He is the author of Asian Naval Expansion: An Arms Race in the Making (London: Routledge, An Adelphi book for the IISS, December 2012), from which this article is adapted.

A story in photos: The recent Han Kuang series of exercises was a serious display of Taiwan’s military power.

Don’t Sweat the Closure of Kaesong

Although a symbol of inter-Korean cooperation, the once noble Kaesong experiment has long been a failure.

Last year’s annual report on Chinese military developments was widely criticized. What does the 2013 version offer?

The pivot is a smart policy which is more nuanced than most people realize. But its China blind spot could be its undoing.