I have some “star-chasing” photographs that I cherish, including some photographs of me with members of the “post-80s” generation. And I don’t mean photos of beautiful girls who were born after the 1980s – I mean photos of me with scholars who are over 80 years old. Here, I present one of these photos: myself and Mr. Zhang Sizhi, who is a veteran in China’s legal community and “China’s top lawyer.” 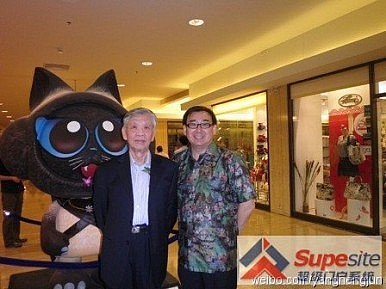 Mr. Zhang hasn’t written many books, so when he recently came out with an oral autobiography I immediately bought it and devoured it. Zhang Sizhi is the real deal: an “old revolutionary.” At the age of 16, in the midst of World War II, he flew over “the Hump” and joined the Chinese Expeditionary Force in Myanmar. Later, Zhang joined an underground branch of the Communist Party and threw himself into the CCP-led revolution. When the new government was established in 1949, Zhang became the first judge in Beijing. Later, though, Zhang chose to pursue China’s least wanted and most powerless profession: a lawyer. During the Cultural Revolution, he suffered along with all of China’s intellectuals, although his road was longer than most: he spent 15 years in a “reeducation through labor” camp. After resuming his profession, Zhang became a model teacher and spent eight years working for the All China Lawyers Association.

In 1980, Zhang Sizhi was assigned as the leader of the defense for the case against the “counterrevolutionary gangs” of Jiang Qing and Lin Biao – the first major legal case in the PRC. That was perhaps the moment when Zhang really became famous, but if it hadn’t been for Zhang’s activities in the legal field over the past 20 years, we probably wouldn’t remember him today.

In the case against Jiang Qing, lawyers had very limited options. At that time, Peng Zhen (then the secretary of the Central Committee’s Political and Legal Affairs Commission) hoped to have lawyers appear in court as a way to demonstrate that China had emerged from the lawlessness that defined the Mao era. Peng wanted to prove that China would make judgments according to the law, and (even more importantly) govern the country according to the law.

However, from Mr. Zhang’s account in his autobiography, we can see that the lawyers were only for show. This is easy to understand – under the legal system at that time, how could the law not be a decoration? Mr. Zhang earned much admiration from his reflections on the role he played in that trial. I believe this experience drove him to stand at the front lines in later years, when China was in the midst of constructing a legal system.  Over the past 20 years, Mr. Zhang’s peers have all retired, but he still stands at the front lines in protecting people’s rights, an especially in protecting the law. In this way, he has won widespread respect.

This year, the Fourth Plenum enthusiastically discussed “governing the country according to the law” and the “rule of law.” Under these circumstances, it’s a great time to read Mr. Zhang’s autobiography. Today, 65 years after the founding of the PRC, some officials and scholars still think that “governing the country according to the law” means using the law to manage the people. They still hesitate between creating a China with the “rule of law” or continuing to promote a “people’s democratic dictatorship.”  It’s both painful and disillusioning.

In a previous blog article, “Without Legal Guarantees, Everyone Is a Vulnerable Group,” I pointed out that some officials are taking advantage of China’s lack of the “rule of law.” Where there are laws, some officials don’t follow them and instead enrich themselves while oppressing the people. It seems like a happy situation for them, but look more closely: after a few years, there will come a time when these high-ranking Party and government officials are pulled in front of a judge and not given any opportunity to provide a legal defense. Even their right to select their preferred lawyers has been taken from them. Under this scenario, we can truly see that the rule of law in China isn’t only meant to protect the people, but is also a shield the protest the legal interest of officials.

In his description of Jiang Qing’s case, Mr. Zhang Sizhi said that Jiang, who had been Mao Zedong’s wife, picked four lawyers as candidates for her defense team, but the “powers that be” didn’t approve a single one. In the end, she was the only member of the accused that that didn’t have a defense lawyer.

It’s said that during the Mao era, China faced a complicated domestic and international situation, and the ruling party had no governing experience. But today, after reform and opening up and especially after the past 20 years of development, there’s no excuse for not “ruling the country according to the law.” If we think for a moment, it’s not hard to discover that behind almost all cases of corruption, social unrest, and “mass incidents” there’s a Party official who violates or does not follow the law. Zhou Yongkang, the former secretary of the Central Political and Legal Affairs Committee, became a huge corrupt “tiger.” Why? Because he controlled the political and legal system and the “social stability” system. He deliberately violated the law in order to deal with those “rights defenders” who would make it impossible for him to continue his corruption. Ultimately, he became China’s biggest “tiger.”

Bo Xilai stood trial in a court, and so will Zhou Yongkang. Tigers and flies from all across China should also appear in court. The reason these officials came to such an end is because they put themselves above the law and didn’t act according to the law. In this sense, the administration’s decision to focus on constructing a robust rule of law for China even as the government fiercely battles corruption will win broad support from the people. Not only that, but “governing the country according to the law” will receive little resistance from Chinese officials – without the rule of law, people who put themselves above the law can definitely embezzle public funds, but they can also lose everything overnight without even being given a chance to defend themselves!

A longer version of this piece originally appeared in Chinese on Yang Hengjun’s blog. The original post can be found here.

Yang Hengjun is a Chinese independent scholar, novelist, and blogger. He once worked in the Chinese Foreign Ministry and as a senior fellow at the Atlantic Council in Washington, DC. Yang received his Ph.D. from the University of Technology, Sydney in Australia. His Chinese language blog is featured on major Chinese current affairs and international relations portals and his pieces receive millions of hits. Yang’s blog can be accessed at www.yanghengjun.com.

The Trial of Zhou Yongkang and China's Rule of Law

The closed-door trial is a missed opportunity for judicial transparency and the rule of law in China.

China's Potential Trial of the Century Over Before It Begins

Zhou Yongkang was sentenced to life in prison before the public even knew the trial was underway.

Xu's trial will serve as a symbol for the "rule of law" over China's military.

Zhou Yongkang and the Rule of Law With Chinese Characteristics

Zhou Yongkang's case ties in with Xi Jinping's larger vision for the rule of law in China.