Kazakhstan on the Edge

The Politics of Pandemic in Southeast Asia

China and the COVID-19 Debt Crunch

How Chinese Nationalism Is Changing

Earlier this month, German Chancellor Angela Merkel voiced support for free speech in Hong Kong and condemned the conviction of Uighur academic Ilham Tohti, just days before she and Chinese Premier Li Keqiang signed multi-billion-euro trade deals in Berlin. Merkel’s remarks illustrate how important democratic principles remain in Sino-European relations, but also how such principles coexist, at times uneasily, with an economic partnership that China and Europe both now view as essential to their futures. In the U.S., however, where the notion of a “pivot” or “rebalancing” to Asia reflects – independent of actual policies – a deeper sense that the region deserves a greater share of Washington’s attention span, Europe is more often seen as peripheral, if not a distraction, in China policy.

And yet, to work effectively with China this century, the U.S. will have no more important ally to cultivate than Europe. European trade with China has quadrupled over the past decade, and the European Union now vies with the U.S. as China’s number one export market. Chinese leaders regularly lead commercial delegations through Europe, with former Premier Wen Jiabao visiting Germany alone six times while in office, and his successor already making three trips to the continent within the past year. With Chinese banks struggling with weak balance sheets, and housing prices declining for the past four months, boosting exports to Europe will remain key for Beijing as it seeks to avoid an economic slump.

China itself is an increasingly lucrative market for the EU: Though the U.S. still ranks as its top trading partner, Europe’s shipments to America have declined 37 percent as a share of exports over the past decade, while China’s share has risen 77 percent. Imports tell a similar story, with China already surpassing the U.S. as the chief source of European imports. As China and Europe continue to grow closer, this interdependence risks sidelining U.S. influence in both lands. 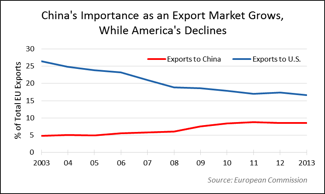 Yet there are also complications on the trade front that suggest the U.S. and Europe share some common interests. In 2012, the EU launched against China the largest anti-dumping investigation in its history, involving $26.5 billion in solar panel exports. While the EU settled the case last year, it has left European solar producers deeply unsatisfied; the U.S. has reacted more harshly, with the Commerce Department levying tariffs of up to 35 percent on Chinese solar imports. The EU also joined the U.S. and Japan in its WTO complaint against China on rare earth export quotas, a case that China lost on appeal this August.

Foreign direct investment also reveals shared concerns: Surveys this year by the U.S. and EU Chambers of Commerce found that 60 percent of respondents felt foreign companies received unfavorable treatment in China, encompassing everything from market access barriers to politically motivated investigations. Along with trade, there is clearly significant overlap here between U.S. and European priorities. While the Trans-Pacific Partnership (TPP) has attracted the most attention as an American attempt to pressure China on reforms, the Transatlantic Trade and Investment Partnership (T-TIP) between the U.S. and Europe would also play a role, as it would advance international norms and standards at a time when global trade talks are on life support. And yet, despite perennial calls in Washington for China to play by the rules, both TTP and T-TIP have yet to achieve real momentum, with Obama not even possessing the fast-track authority he needs to move the deals forward.

For regional security, military cooperation and joint exercises with Asian allies continue to form the backbone of U.S. policy. At the same time, were U.S.-China tensions ever to come to a head, NATO would be called on as a key, if not the key, U.S. partner. As unlikely as this may sound, in early 2001, the notion that NATO would fight for over a decade in Central Asia would have appeared far more implausible, as would the alliance’s 2011 campaign in Libya.

Skeptics can raise a number of objections here: NATO members’ unity and capabilities have fallen short in Afghanistan and Libya; moreover, disorganization when confronting this year’s Ukraine conflict, as well as Turkey’s reticence in joining U.S. efforts against the Islamic State, only compound doubts about the plausibility of a future Asian mission. Plus, NATO’s non-U.S. military spending, while still greater than China’s, could soon be matched by the PRC at current Chinese growth rates.

There is no question U.S. capabilities exceed those of its European allies, nor that China’s spending growth is real. The point, however, is that China sees defense affairs regionally, or as aspects of Sino-American relations, though in fact the stakes of conflict are global and implicate Europe particularly. Consequently, China tends to frame the country’s standoffs – be they with Japan, the Philippines, or Taiwan – as one-to-one local rivalries, which ultimately makes aggressive policies more likely. In these cases, China often interchangeably warns against “internationalizing” (guojihua) and “complicating” (fuzahua) disputes, but that is because internationalizing them could undermine the legitimacy of strong-arm tactics. Focusing more on Europe’s potential role in the region – a role that should be self-evident given U.S. mutual defense pacts in East Asia – would help to internationalize security in a way that American assistance to its regional partners cannot. 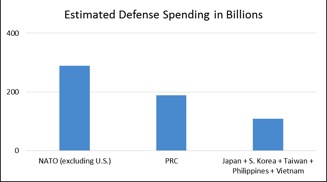 There is also the question of whether such assistance can offset certain allies’ own defense reductions (such as that of Taiwan), or whether the assistance itself will be forthcoming in light of America’s own fiscal constraints. Admittedly, doubts over Europe’s spending on defense have their own long history, but given the chart at right (which draws from NATO and SIPRI estimates), the Europeans are still to be taken seriously: If we doubt NATO’s efficacy at its current spending levels, then we must either (a) be even more dubious of Asia’s defense capabilities, given how far behind the region’s expenditures lag; or (b) conclude that defense spending is just not useful as even a rough metric of power. Either money is important, or it’s not. The implausibility of (b) suggests that NATO, whatever its shortcomings, should shape how the U.S. thinks about guaranteeing security in East Asia.

Working more closely with Europe – from economic cooperation to security and human rights – is an opportunity to answer Beijing’s suspicions that America seeks out a kind of bilateral showdown with China. Though allaying such suspicions won’t be easy, it will be impossible without soliciting Europe’s support. The world should welcome America’s increased focus across the Pacific, but it will benefit no one if an Asian pivot also entails a cold shoulder.

The author has served as Executive Director at the U.S.-China Education Trust and as Deputy Director for Europe at the International Republican Institute. The views expressed here are his own.

How is Timor-Leste improving its climate resilience?

Kazakhstan on the Edge

China and the COVID-19 Debt Crunch

Experts fear the Philippine president is testing the waters for a constitutionally viable declaration of nationwide martial law.

By Helena Legarda and Meia Nouwens

NATO needs a coordinated and comprehensive strategy to deal with an ever-more confident China.

What Are America’s Interests in Hong Kong?

The hardnosed new U.S. approach to Hong Kong may actually end up undermining U.S. interests in the region.

COVID-19 and a New Direction for Asian Integration

The crisis should prompt a change in thinking.

The US Must Counter China’s Malign Agenda

China poses a threat to the U.S. and the world.

The countries of Southeast Asia have the rare chance to leverage Beijing’s language of interdependence in addressing pressing issues, such as the Belt and Road and South China Sea.

Venues and musicians in Wuhan, China’s underground rock capital, are struggling with lockdowns after the outbreak of COVID-19.

The Politics of Pandemic in Southeast Asia

By Zachary Abuza and Bridget Welsh

No government is likely to fall as a result of its COVID-19 response, the impact on politics is still significant.

Can Thailand avoid following in Singapore’s footsteps by upgrading its treatment of migrant workers?

Is China Changing Its Thinking on Data Localization?

What to make of new provincial cross-border data flow proposals.

Is the ‘1992 Consensus‘ Fading Away in the Taiwan Strait?

Beijing and Taipei‘s nebulous common understanding is not what it used to be.

China has no interest in the kind of arms control being discussed by the Trump administration.

New Delhi has been sending Beijing signals via its diplomatic interactions with the U.S., Taiwan, and Australia in recent weeks.

Amid Virus, Those in India’s Largest Slum Help One Another

Dharavi, India’s largest slum, has been hard-hit by the pandemic.

The country, which has confirmed just 443 cases of COVID-19, is set to ease social distancing seating restrictions in public places.