The South Korean National Assembly (which has been uncharacteristically productive as of late) recently passed welfare reform legislation (three bills in total) to fix holes in the social safety net. Korean media identifies the impetus for the reform as coming from a particularly tragic triple suicide that occurred earlier this year, in which a mother and her two daughters took their own lives because of physical and financial hardships. As one illustration at the Hankyoreh suggests: The welfare system is broken and little is being done to help those at the lower end of the socioeconomic ladder. One might reasonably expect that social dislocations in the era of neo-liberal capitalism in South Korea might negatively affect how Koreans view the capitalism economic system. Indeed, the structure of South Korea’s economy and how Koreans view it has been the focus of more recent work on South Korean political culture.

In Measured Excess: Status, Gender, and Consumer Nationalism, Laura Nelson examines the cultural side of capitalist and consumer market development in South Korea and the instrumental role of consumption in the construction of individual identities and the formation of a “consumer nationalism” (Be Korean. Buy Korean. For the Future!). While her ethnographic work focuses on two groups of women (one wealthy, the other not so wealthy) and their consumption habits, her work is also an interesting study of the relationship between socioeconomic development and political attitudes.

In her book, Nelson finds that the “shared sense of deprivation” following the destruction of the Korean War and the collective struggles in the early postwar period had a leveling effect in society: No one was economically well-to-do and thus class distinctions and divisions were insignificant. And despite the modest growth in personal income in the 1970s, the structure of the domestic economy was such that levels of consumption were relatively equal because demand was low across the social board. Indeed, “The South Korean state/chaebol nexus fostered a national culture of patience that helped to defer consumer demand.” (p. 26) However, with the growth of the domestic economy and an increase in “consumer welfare” in the 1980s and 1990s, new products and an increase in the demand for commodities drove the rapid development of Korea’s consumer market. Notably, “With the growth of the consumer market came a new source of dissatisfaction and social division.” (p. 24) As consumption rose, so did social distinctions and class divisions.

In addition to showing how class, among other things, is reflected in Koreans’ consumption behavior, Nelson also explores the interaction between changes in social and economic conditions and how this affects what Koreans think about (consumer) capitalism. Indeed, her depiction of anti-consumer attitudes, because of “over-consumption” (kwasobi), shows that as capitalism and consumerism progress, so too does disenchantment. In the “coda” (re: conclusion), she suggests that Korea’s hyper-consumerism has led to social disenchantment with the system itself, especially in the post-1997 economic and social conditions. It is not a fully developed idea, but it is a suggestion – or, rather, a hypothesis – that could be reformatted as follows: as Korean capitalism has developed and the consumer market expanded, have people become increasingly disenchanted with Korea’s brand of capitalism? If so, has this disenchantment increased since the Asian Financial Crisis?

To answer these questions and test Nelson’s hypothesis, I gathered data from the World Values Survey for the question regarding whether incomes should be made more equal (V.96). Respondents are asked to place their views on a scale of 1 to 10, where 1 means they completely agree with the statement “Incomes should be more equal,” and 10 means “We need larger income differences as incentives for individual effort.” I gathered data for five waves of surveys between the years 1989 and 2014. In each wave, no fewer than 1,200 people were randomly sampled. I grouped those who responded between 1-3 as people who generally think “Incomes should be made more equal” and those who responded between 8-10 as those who think “We need larger income differences as incentives.” Those who selected between 4-7 I classified as “Conflicted” (those holding mixed views). I chart the results in the graph posted below: 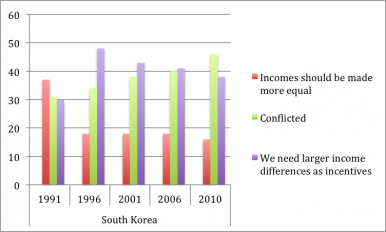 While this is a crude measure of what people think about capitalism in South Korea, I do think it captures two important trends One: the attitude changes in the 1990s (between 1991 and 1996; a time of great change in the production and consumption market) from wanting equality to wanting inequality. And two: the rising sense of “Conflictedness” about the consumerism-fueled economic system that took root in the 1980s and 1990s (this is a central focus of Nelson’s work). So, to answer my questions: no, people aren’t more disenchanted, but they are “conflicted.” And if inequality and over-consumption continues, we may see an increase in those who believe incomes should be more equal. The data also indicates that the significant changes brought about by the structural adjustment policies in 1997-1998 did not have a major impact on the trajectory of attitudinal development, except perhaps among those who thought it was necessary as an incentive mechanism.

Given the pressure to stay competitive in an increasingly competitive global market, the economic policies adopted by South Korean administrations going forward will be hugely important. Whether the government helps alleviate the social dislocations of liberalization, takes a negligent position, or (inadvertently) exacerbates the inequalities will be something to watch closely as a democratic Korea goes forward. It does appear, however, that the Korean people are beginning to recognize the potential ills of their economic system. Whether attitudes shift significantly toward wanting more equality is yet to be seen.

While the North Korea setback gets the headlines, Trump's trade war with China might be worse news for South Korea.

For South Korea, FEALAC has become a key platform where major elements of its foreign policy agenda converge.