If forecasts are anything to go by, Asia will account for two thirds of the global middle class population in 2030. Whereas investors and businesses already did the math and are waiting in line to capitalize on rapidly expanding consumer markets, political analysts are only slowly beginning to grasp what the rise of Asia’s middle class means for governments in the region, especially in non-democratic countries.

Will the middle class demand more democracy, representative government, and a greater say in the running of their countries? Or will it remain satisfied with one-party states, military regimes, or elected autocrats, as long as the economy grows and their material needs are satisfied? 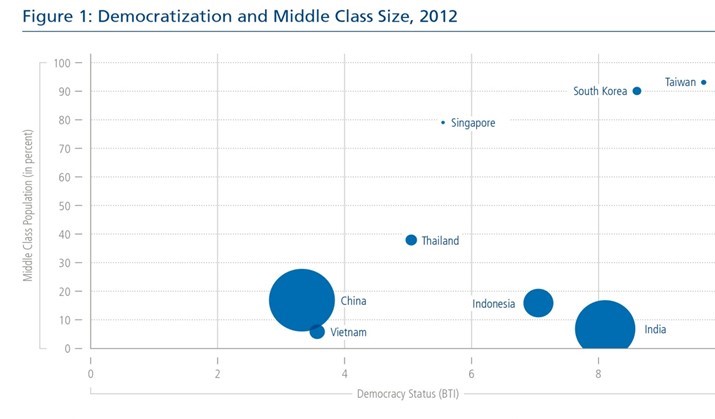 What seems clear is that a substantial middle-income population does not translate into a healthier state of democracy in any straightforward manner. The size of the middle class  and the state of political transformation based on the Bertelsmann Stiftung’s Transformation Index (BTI) appear to be only loosely correlated in selected Asian countries. In relative terms, Indonesia’s middle-income population is half the size of Thailand’s, but democracy has fared much better in Indonesia than in the kingdom on the Southeast Asian mainland.

The answer to the question what political role the middle class will play depends on which middle class one looks at, at least in Southeast Asia. The term is therefore better used in the plural, i.e. middle classes, to reflect their internal diversity. This diversity goes a long way toward explaining not just the class dynamics of Southeast Asian societies but the rocky political paths that some countries in the region have recently taken. Thailand and Indonesia are cases in point.

2014 was a decisive year for both nations. Thailand experienced yet another wave of violent protests, which culminated in another military coup, while Indonesia held a peaceful presidential election, which nevertheless revealed a political rift in the country. In both states, political developments were affected not primarily by tensions between the extreme ends of society, but within the growing middle of the societal hierarchy.

It may seem odd to compare two seemingly disparate places like Thailand and Indonesia, the former being ruled by a bizarre and reactionary military junta and the latter by a democratically elected president who ran on a progressive ticket. In fact, in recent months analysts have started to hold up Indonesia as the new beacon of democracy in the region, contrasting it with Thailand’s constant slide into the political abyss.

It is easy to agree with such an analysis if one compares the rational and humble nature of Indonesian president Joko “Jokowi” Widodo with the clumsy exploits of Thailand’s military dictator Prayuth Chan-ocha. But this means forgetting how narrowly Indonesia escaped a return to its authoritarian past, the so-called New Order, in the presidential elections: Almost half of Indonesian voters risked a return to the New Order by supporting the controversial candidate Prabowo Subianto, who promised a firm dictatorial grip. And even though Prabowo was the losing candidate, parties backing him still dominate the parliament and began an assault on democracy in September by trying to scrap direct elections at the local level.

In search of explanations for the polarization in both countries, it is important to look beyond a simple poor-vs.-rich dichotomy. Media reports suggested that it was not primarily the poor and uneducated parts of Indonesian society who supported Prabowo – quite the opposite. In the weeks before the elections, Jokowi had to work particularly hard to woo the urban-based and supposedly rationally minded middle class to secure his victory. While voters with only a primary-school level of education were mostly backing Jokowi, those with a university degree and a monthly income of more than two million Indonesian rupiah (US$165) had been shifting their support to Prabowo.

It appears as if it their nostalgia for the good old days of effective authoritarianism, and their disenchantment with a corruption-prone democracy, almost led to Indonesia’s democratic demise. Anti-democratic protests in Thailand were likewise driven by an urban-based middle class with fond memories of a time when Thai generals ruled the kingdom in tandem with the monarchy. Democratic support, in contrast, seemed to come from members of the emerging lower middle class in the provinces.

The historic trajectory of Southeast Asia is key here. In the second half of the 20th century, developmental regimes throughout the region fostered the emergence of a middle class that owed its existence to these authoritarian states. Middle-class identities were not shaped in a democratic setting or in resistance to government interference, but in the context of a symbiotic relationship with it. Only when this arrangement started to fail, particularly in the wake of the 1997 Asian Financial Crisis, when the frailty of technocratic efficiency and top-down development became obvious, did the middle class help overthrow authoritarianism.

But as the region’s economies expanded again and captured people at the margins, a new and aspiring middle class stirred suspicions among the established one, with its sentimental ties to the old developmental regimes. While the newcomers considered democracy a useful tool to secure for themselves a slice of the national cake, the established middle class – relatively small in numbers and therefore insecure – grew more defensive. Its members had simply not learned how to share. These middle-class reactionaries again supported authoritarians like the royalist generals in Thailand and the New Order lackey Prabowo in Indonesia, thereby reversing, or endangering, democratic progress and the material improvement of their new fellow class members.

The “Tyranny of the Old Middle” has succeeded in destroying democratic institutions in Thailand. Indonesians narrowly averted this fate for now by electing Jokowi, although his winning margin was, as already noted, far from impressive. It is the Old Middle that Jokowi and other democrats in Southeast Asia have to convince of the need for greater solidarity and democratic governance.

The exploitation of lèse-majesté laws for political gain are undermining human rights in Thailand. Violence is looming.

No government should be blamed for a pandemic, but they should be scrutinized for how they respond.

Since Pelosi’s visit, the future of the cross-strait issue has surged toward military conflict, as the Chinese public started to dismiss the possibility of peaceful reunification.