After a week of escalating government threats and arrests, razor wire and shipping container barricades were set up around the Crown Property Bureau (CPB) on Wednesday for a tense showdown between police and protest groups. But the protesters had other ideas.

“I’m happy it is changed,” says a protester wishing to be referred to as Chan. “We want peaceful protests. We all want to be peaceful. Thais are peaceful.” Protesters met, among other reasons, to criticize the king’s wealth, which is estimated at $40 billion. The king holds a $2.3 billion stake in SCB. 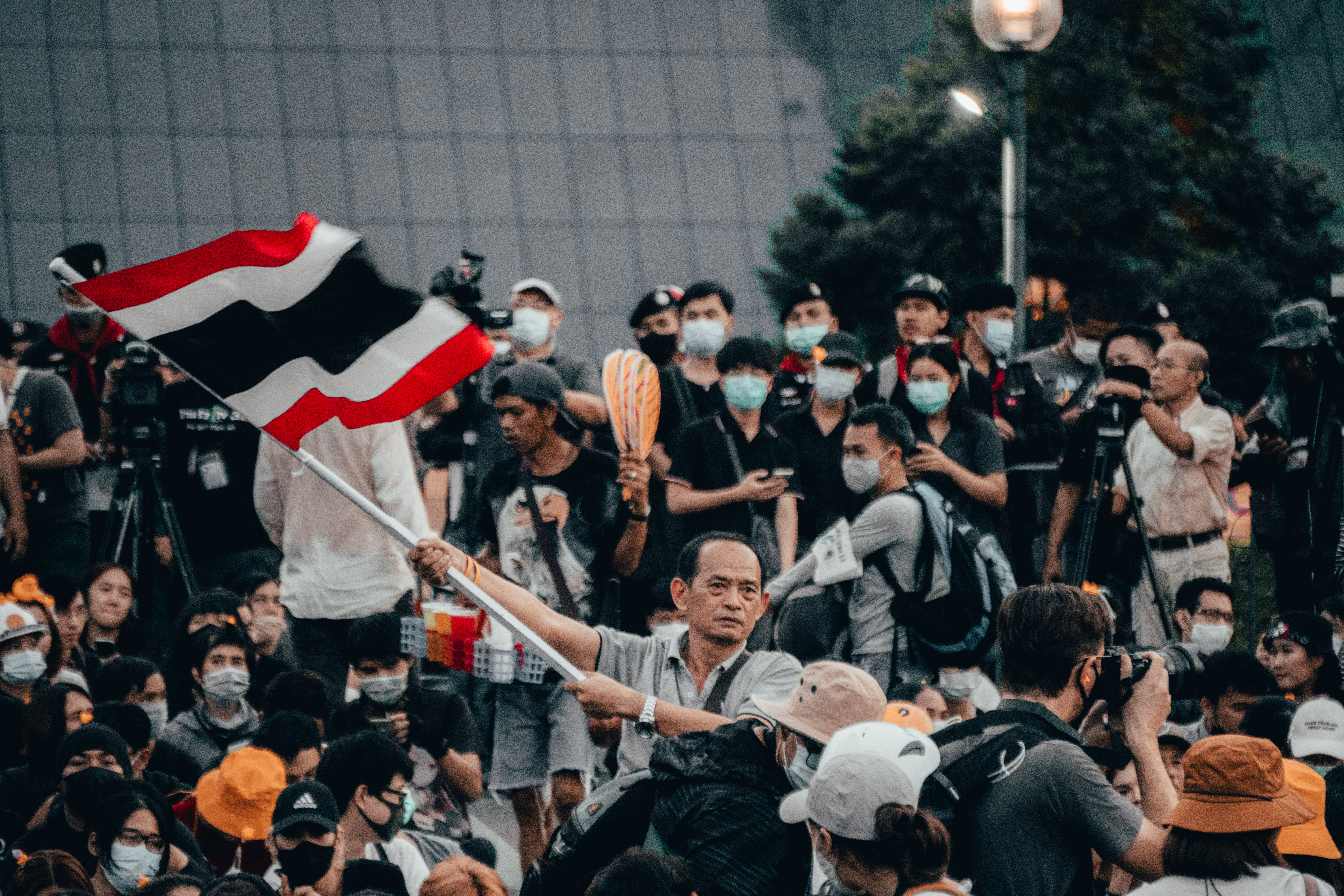 A protester waves the Thai flag in front of SCB headquarters. Photo by Tyler Roney.

The protests that have gripped Bangkok have been largely without major conflict, but scuffles between protest groups and police last week saw scenes of violence, gunshot wounds, and water cannons. By moving the protest, Wednesday’s event was an occasion for political speeches, songs, and dancing. The week, however, had taken a severe toll on the movement’s leaders.

To much shock around the country, Prime Minister Prayut Chan-o-cha gave notice on Thursday last week that “all laws and all articles” would be used against the protesters, and on Tuesday the worst fears were confirmed when 12 protest leaders were charged under Thailand’s notorious lese majeste law, Article 112.

Article 112 has not been levied in earnest since 2017, with the government relying on vague charges of sedition and computer crimes to silence critics. The resurrected and notorious Article 112 could be levied for almost any reason. In the past, it was used against people for sharing a BBC article or discussing historical battles.

Nonetheless, the protest leaders showed up at the protest. Mike Rayong came early in the day, Chukiat dressed as usual in a satirical outfit, Rung gave interviews, and, to much amusement, Penguin came dressed as a duck. 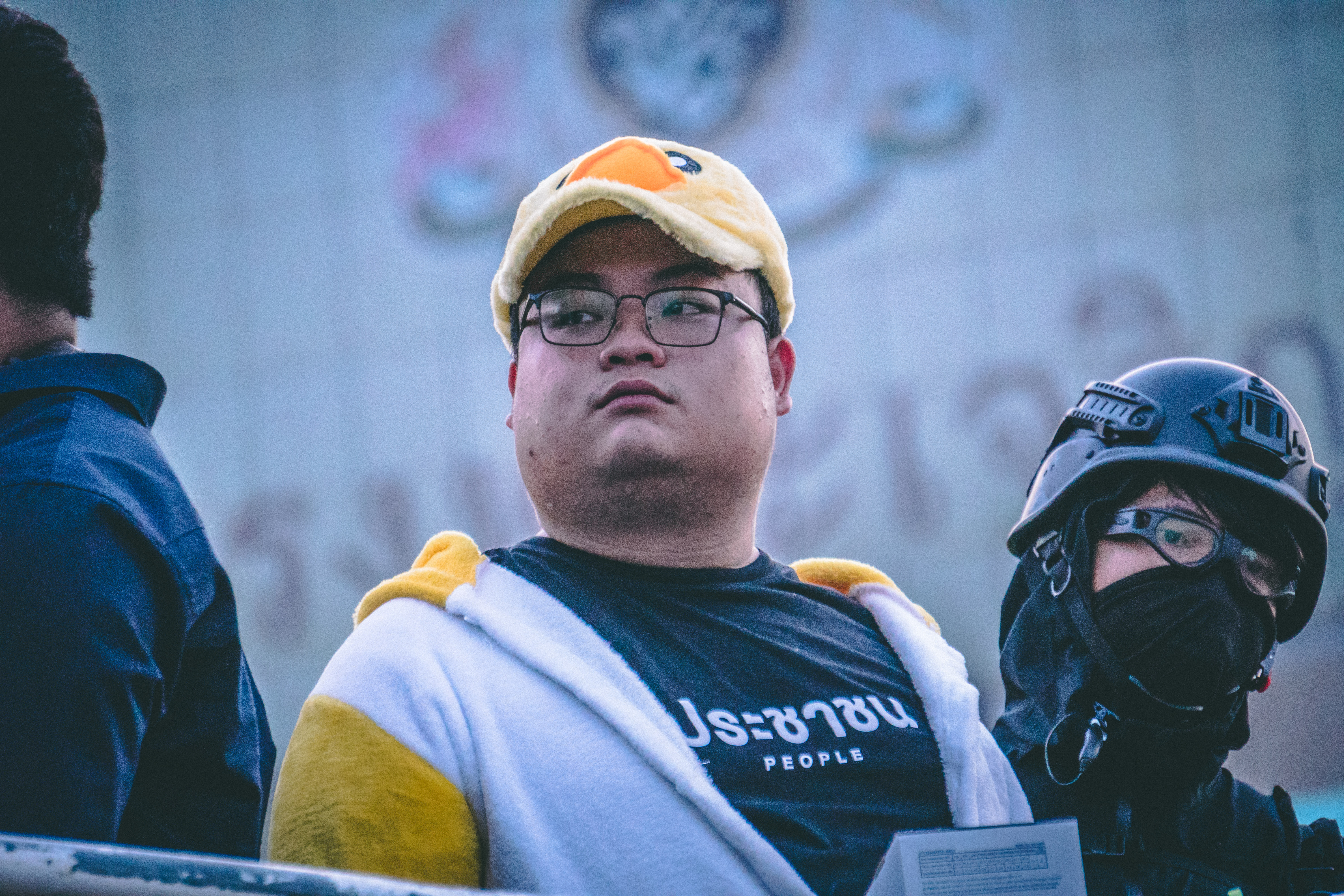 Inflatable rubber ducks have become a symbol of the movement, used last Tuesday against the water cannons, hence Penguin Chiwarak’s costume and the tossing of rubber chickens from the main stage. Penguin has become one of the most popular protest leaders and faces an array of charges for previous protests.

The CPB protest plans stemmed from the Royal Assets Structuring Act of 2018, in which the current king was granted ownership of the CPB’s assets and in which there is no distinction between the royal family’s private holdings and state assets.

The monarch, His Majesty King Vajiralongkorn, is a powerful and, to some, sacred force in Thai politics. King Rama IX was universally beloved in Thailand, but his son has drawn criticism for a range of topics, including his lavish lifestyle. On signs, make-up, and on stage, Thai protesters were fighting back against Article 112 and the king’s finances.

“Reform, not destroy,” says Nam, a student at Suan Dusit University, which was closed in preparation for protests at the CPB. “We are Thai people. We want to control our future and money. End 112.”

Plans to reform of the monarchy involve nearly a dozen specific changes, but the Free Youth group released a statement prior to the protest stating, “The ruling class oppress the people who are the true founders and heirs of this country, not any great king.” 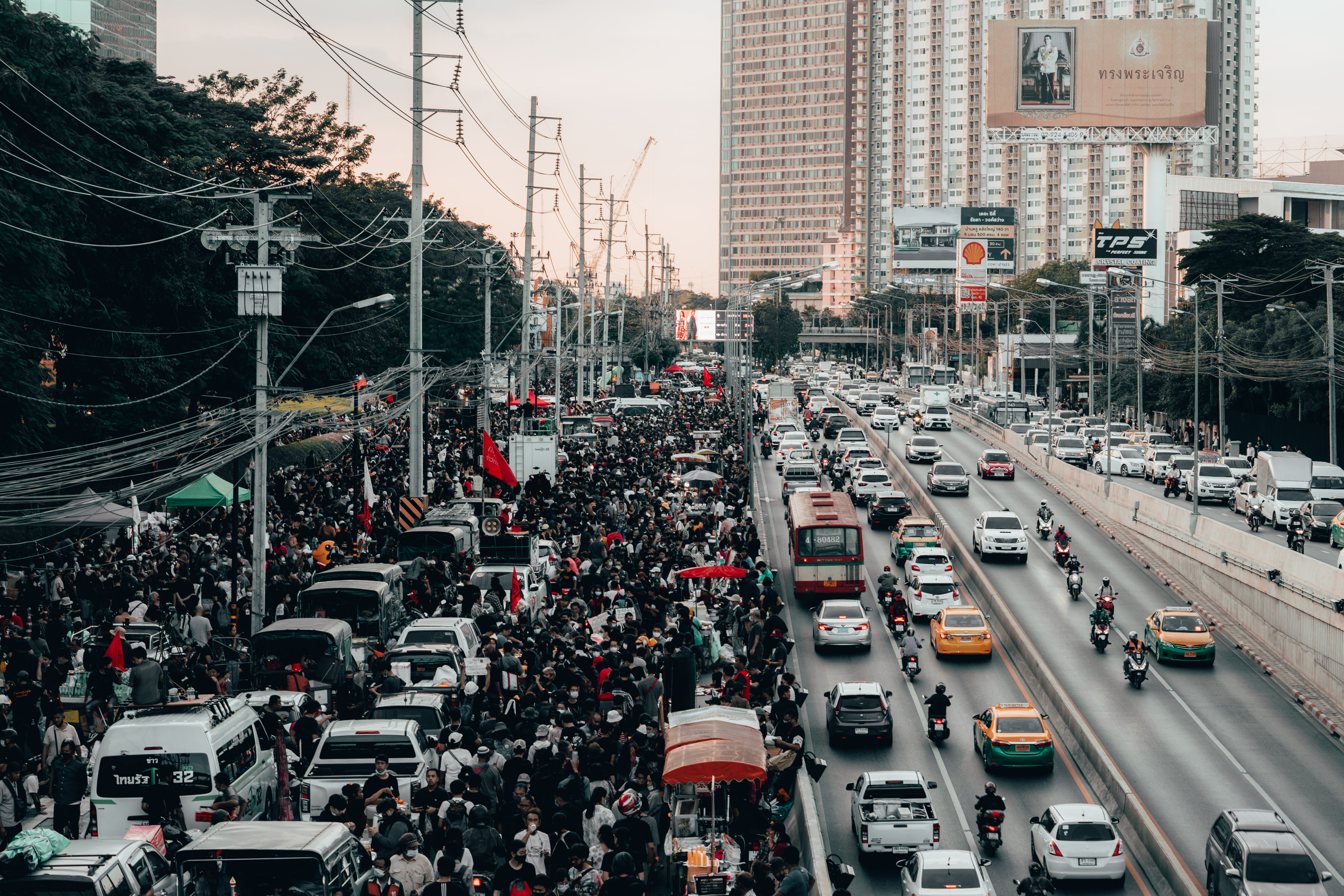 Demonstrators and traffic on Ratchadapisek Road. Photo by Tyler Roney.

As celebration and protest songs raged from Ratchayothin bridge to SCB Park Plaza and beyond, a collection of royalists attended a ceremony with a royal motorcade and shouted support for Prayut in Lumpini park on the other end of town.

The yellow-clad pro-royalists were one of the main reasons protesters chose to move the protests from the Crown Property Bureau. Though smaller in Bangkok and made up of largely older adherents, the pro-royalists at the rally last week were found beating protesters, chucking bricks into the crowd, and the gunshots were believed to have come from a 35-year-old pro-royalist.

Prayut’s military-aligned government has been the central complaint of the protesters, with Prayut taking a great deal of criticism at the protest on Wednesday, including one man dressed as a monk carrying a photo of him in a funeral procession.

The past week has seen the government taking on a much more antagonistic role. In a move seemingly dedicated to sow chaos among the protesters, Bangkok also arrested Piyarat “Toto” Chongthep on Tuesday, head of the “WeVo,” short for “We Volunteer,” who stand arm-in-arm between police and rival protesters to keep the peace. The guards of the protest on Wednesday, however, were unphased, directing traffic and giving security pat downs to those entering the area. 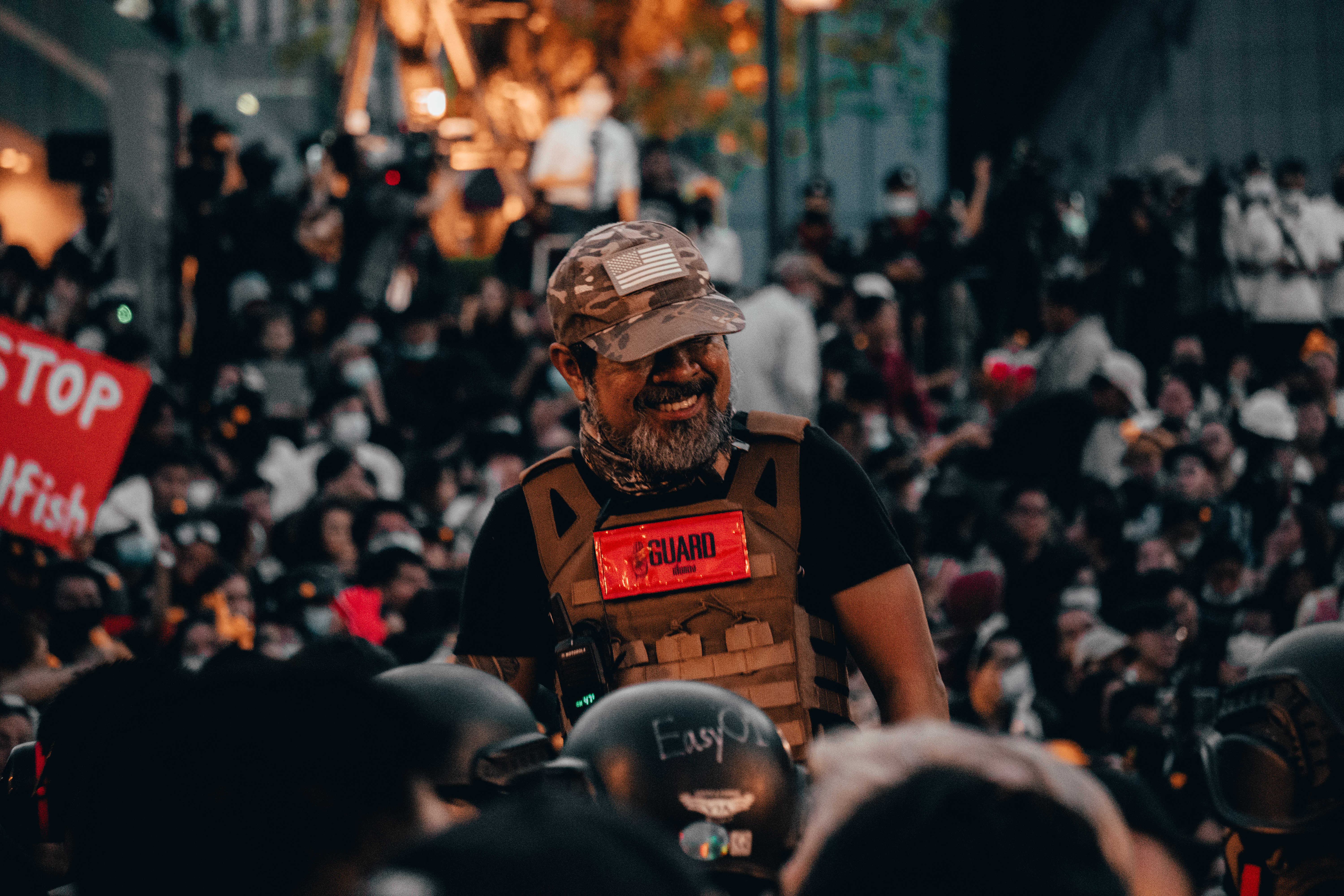 The protests began in 2019 with the lawfare launched against the charismatic Thanathorn Juangroongruangkit’s Future Forward Party but picked up after COVID-19 lockdowns in July with protesters growing increasingly bold. The demands of the anti-government protesters include the resignation of Prime Minister Prayut Chan-o-cha who took power in a 2014 coup, a rewriting of the constitution that keeps the current government in power, and reform of the monarchy.

The protest’s taboo turn toward reforming the institution of the monarchy galvanized royalist groups. The Network for the Protection of the Monarchy planned to gather in front of the CPB to protect the institution against protesters prior to the location being moved to SCB.

The king’s recent charm offensive around the country — following on from criticism of the time the monarch spent in Germany during the pandemic — has fallen on deaf ears for may, with his statements “Thailand is a land of compromise” and “We love them all the same” becoming the subject of derision in the wake of the violence against protesters. 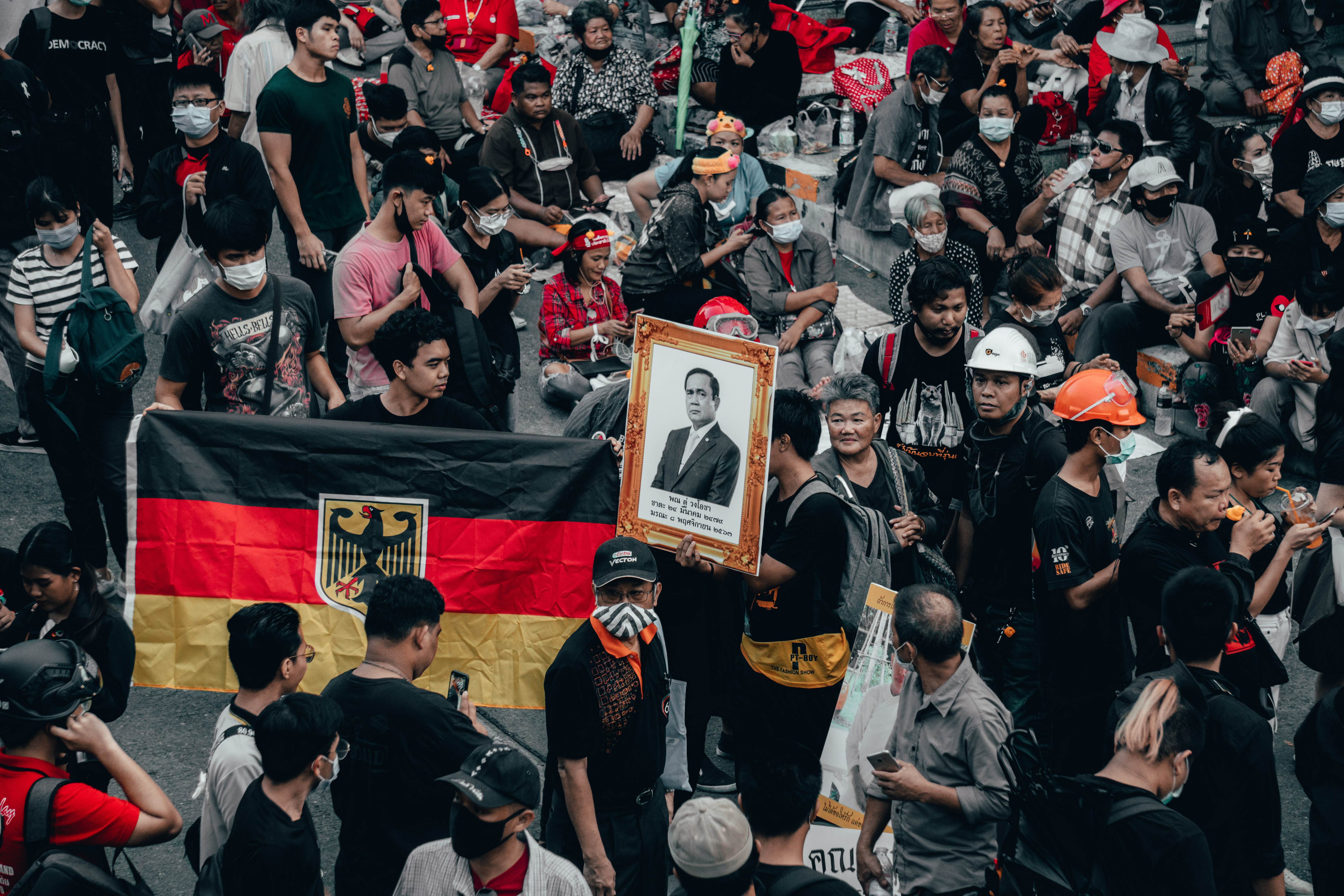 Crowd shot at the November 25 with a picture of Prime Minister Prayut. Photo by Tyler Roney.

Thai Twitter comes alive with the daily “mob” hashtag, with the Free Youth’s eye-catching posters sometimes announcing locations the day of the protest. On the ground, the protests vary from a festival style-atmosphere — with street food and music from local stars — to the harrowing scenes of teargas laced water cannons and bloody wounds.

Some protest groups like Sk8tizen skateboard over Prayut’s face, others like Rap Against Dictatorship film their videos live from the “mob.” On the frontline, Thailand’s protesters have taken lessons from Hong Kong’s 2019 protests.

Opposition to the protesters centers around nationalism and evidence-free accusations that dark money — such as from Thanathorn or the CIA or George Soros — is funding the protesters. As tension grows, the military finds itself denying constant rumors of a coup. 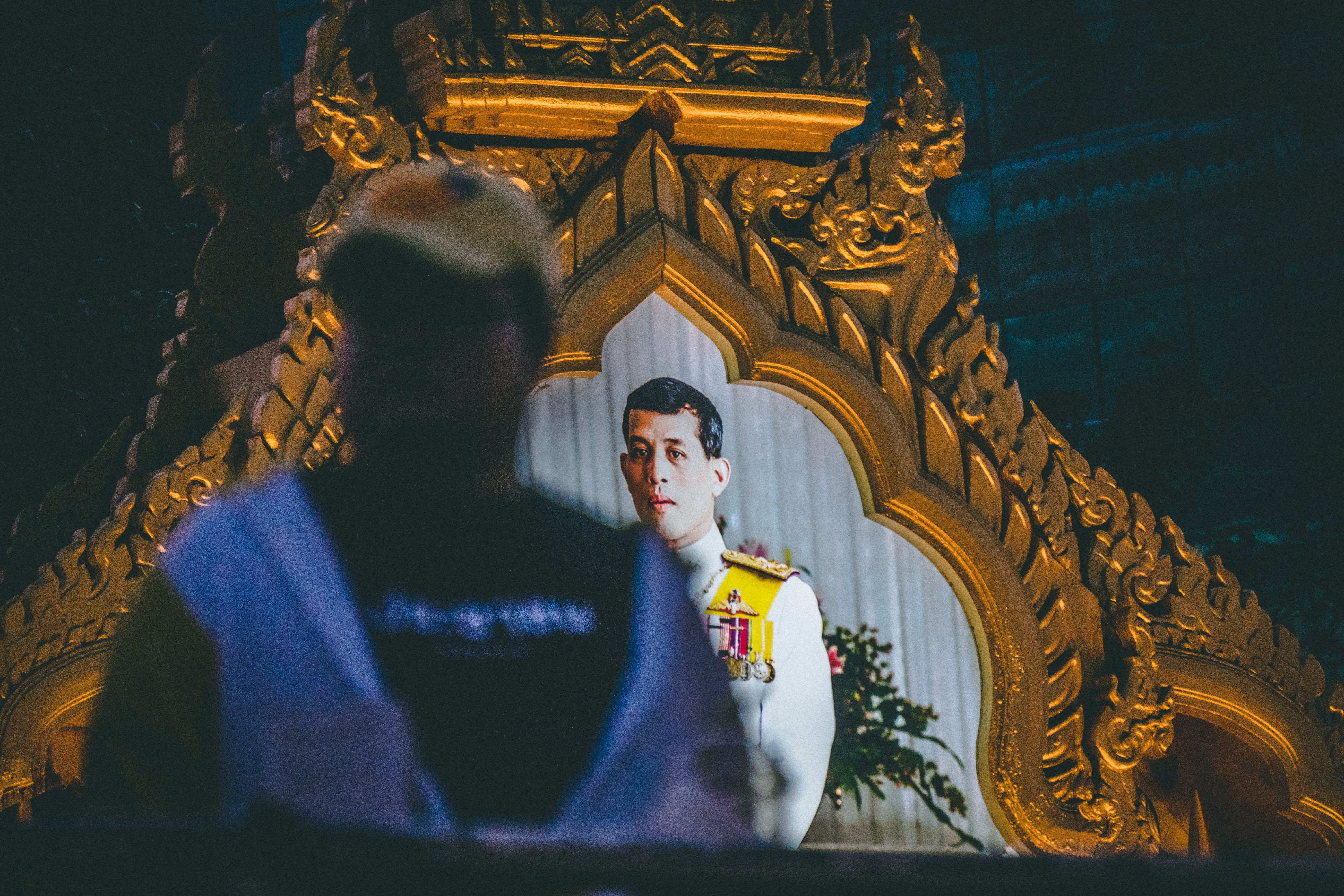 An image of the king at SCB looking down on Parit -Penguin- Chiwarak on the main protest stage. Photo by Tyler Roney.

To little relief, army chief Narongphan Jittkaewtae, urged media outlets to stop reporting coup rumours. Prime Minister Prayut also denied coup rumors before he took power by force in 2014. Move Forward MP Rangsiman Rome was gladhanding at the protest and spoke about how it is ridiculous that the country still has to live under fear of a coup.

The scheduled protests in Bangkok’s Ladprao area on Friday will concentrate on preventing a coup.

This revival of lese-majeste law marks an escalation in the authorities’ campaign against rising pro-democracy protests.

Thailand Protests at a Tipping Point

Some 20 groups called the rally at Bangkok's Democracy Monument this weekend under the name "Mob Fest.”

Despite its lifting of a state of emergency last week, there are reasons to doubt the government's willingness to reform.

Two Years On, Women Remain at the Forefront of Myanmar’s Resistance Movement

By Nandar and Maggi Quadrini

The work of the country's women is central to the success of the Spring Revolution. It's time for the outside world to support them.