Although far from mainstream eyes in many of the world’s major powers, given its almost blanket popularity across the Subcontinent, cricket is the world’s second most popular sport.

While actual sporting interest in the World Cup that began this past weekend (held in Australia and New Zealand) will be limited to those countries with a prominent cricket culture, there is one major facet of the tournament that should be noted by foreign affairs enthusiasts.

The World Cup is a contest between 14 teams. The “Big 10” (Full Members of the International Cricket Council, or ICC) are automatic qualifiers – these are the countries that have the capacity to play competitively against each other in test matches – the five-day version of the game (the World Cup is a “Limited Overs” tournament). These countries are: England, India, Pakistan, Australia, South Africa, Sri Lanka, New Zealand, Bangladesh, Zimbabwe and the West Indies (an amalgamation of Caribbean Islands plus Guyana).

If you are not from one of these regions of the world you may think your country does not play cricket, but you would be wrong. The other four places in the World Cup are obtained through a series of World Cricket League round-robin tournaments between various divisions until four teams remain and earn the right to play against the Big 10.

This year, the heavily English influenced countries of Ireland and Scotland have qualified. The UAE, with its large population of South Asian expats, has also done so. But the fourth is by far the most interesting, and important.

Having only formed a national cricket team in 2001, the rise of Afghanistan, and the subsequent popularity of the sport in the country has become a story of great positivity and hope.

The inspiring and moving documentary Out Of The Ashes follows the Afghanistan team’s trajectory from 2008, and into the lower echelons of the cricketing world (Division 5), against teams such as the Cayman Islands and Jersey, to falling just short of being one of the four countries to qualify for the 2011 World Cup.

During the 1990s, the Taliban tolerated the sport, since it conformed with their dress standards. However, it wasn’t until after the U.S. invasion, when those displaced by the Soviet invasion started returning home from refugee camps in Pakistan, that cricket really began to take off in Afghanistan.

East of the Durand Line the sport becomes an obsession, and young boys growing up around Peshawar would undoubtedly find themselves immersed in the game. This gave the team an ample supply of skilled and schooled players who were able to be transformed into a professional team very quickly. It must be noted that Pashtun tenacity, ignored by major world powers for centuries, could also be considered a factor in their success.

Afghanistan is now ranked 11th in the world and has beaten higher ranked teams in Bangladesh and Zimbabwe.

While the first generation of Afghan players were all from the refugee camps in Pakistan, the team is now beginning to include those who have grown up in Afghanistan since the fall of the Taliban The popularity of the sport has provided a promising array of young players motivated to compete regularly against the sport’s major countries.  The Under 19 team finished 7th in the Under 19 World Cup of last year, beating cricketing powerhouse Australia during the tournament, underscoring the progress the sport is making in Afghanistan.

Of course, with success comes responsibility, and fast bowlers Hamid Hassan and Shapoor Zadran have found themselves used as cartoon characters in government literature attempting to keep kids away from nefarious influences. The hope is that young men will be encouraged to pick up bats and balls instead of guns. 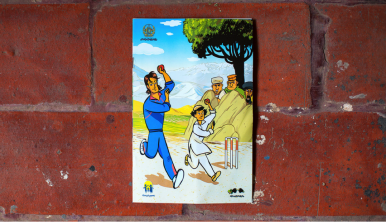 However, there is also a flipside to the team’s newfound fame. The team’s captain, Mohammad Nabi, had his father kidnapped by “local goons” in March of last year, with a $2 million ransom asked for his return. Fortunately, he was eventually released in August, with no ransom paid.

Jalalabad is seen as the heart of cricket in Afghanistan, which does present something of a dilemma for the Afghan government, as surrounding areas still maintain a heavily Taliban influence. And indeed, the Taliban has claimed credit, and have shown enthusiasm for the team’s success. This is creating a tug-of-war over the team between the administration in Kabul and its still powerful internal threat.

Both actors have realized that the hearts and minds of young men is the key to stability in Kabul’s case, and countering this stability in the Taliban’s. Embracing, and not reacting to the sport’s popularity, has been a canny move by the Taliban.

Jalalabad being cricket’s most fertile ground, however, presents one other glaring issue for the country, and that is all of the current squad for the World Cup are Pashtun. For the game to be an integral part of the country’s stability, it is important that is it not see as an exclusive Pashtun pastime. The government has introduced the sport into schools throughout the country, and the hope is that soon players from all backgrounds will rise to the elite level.

Afghan journalist, Malik Achakzai has told The Diplomat that players from Tajik, Uzbek, Hazara, Pashai, and Nuristani backgrounds have made their way into the structures just below the national team. So the era of an exclusive Pashtun team may soon make way for an ethnically diverse national institution.

India has recognized the importance of the sport for regional stability, and recently committed $1 million for a cricket stadium in Kandahar. The Afghan team has yet to be invited to play in India (they play frequently in Pakistan), although this may also be down to the snobbishness of the Board of Cricket Control India (BCCI), which still believes inviting Bangladesh to play in India is beneath it. (Eighty percent of cricket’s revenue is made in India, making it the goal of every cricket board to play there.)

This World Cup is seen as a test for Afghanistan – a chance to consolidate their position as “the best of the rest.” They’ll be expected to beat those teams ranked below them (although they have a strong rivalry with Ireland, trading victories), and potentially even surprise one of the more powerful teams. This would then give them a claim to be included as the 11th Full Member of the ICC, an extraordinary achievement.

The Afghan public will certainly be hoping for some strong results to advance this cause, and those interested and involved in the development and stability of the region should be doing likewise.

Life in a Far-Flung Corner of the Taliban Emirate

Previously Taliban-controlled areas have seen improvements since the group took control of the country, but some problems remain.

Understanding the Taliban’s War on Women

The Taliban’s regressive ideology lies at the heart of its political program. It was naive to believe the group would ever give it up.