High-resolution satellite images from April 17, 2015 reveal that in the space of ten weeks China has built an island on top of Subi Reef in the disputed Spratly Islands group. The dimensions and shape of the land fill, which is still underway, are compatible with a potential airstrip 3,300 meters long, similar to the prospective length of the runway currently being paved on Fiery Cross, the site of another installation being built by China on a former reef in the Spratlys. 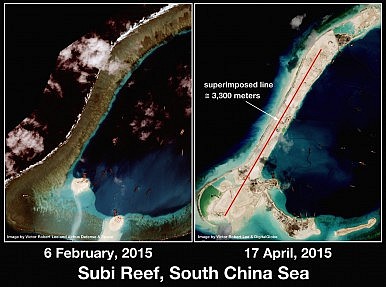 Military analysts have observed that a runway 3,300 meters long could support virtually all types of combat and supply aircraft in China’s navy and air force.

As recently as February 6, 2015, only two small sites of dredging and land fill activity were detectable at Subi Reef, part of a maritime region that is claimed by the Philippines, Vietnam, Malaysia and Taiwan, as well as China. As of April 17, 2015, the land fill of Subi measured 2.27 square kilometers in area, on a par with the rapidly manufactured island at Fiery Cross Reef, recently assessed as 2.65 square kilometers in area. 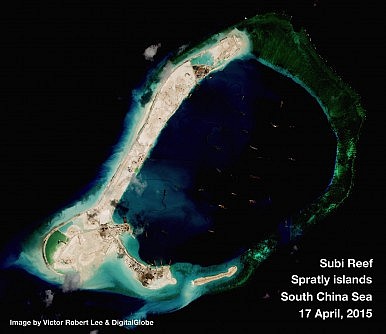 A notable difference between China’s buildup at Fiery Cross versus Subi is that Fiery Cross has a sizable new port as well as a runway/taxiway under construction. No such navy-caliber port facility is seen in the new images of Subi; however, a channel on the south rim of the reef is being expanded, and the near-complete enclosure formed by the natural reef provides a protective harbor in its own right. In addition, extensive ongoing land fill at the southern extremity of Subi could be purposed for marine docks.

Disputed Mischief Reef in the Spratlys, also the site of rapid land reclamation by China, has been filled in with sand and coral cuttings to an area of approximately 2.42 square kilometers as of April 13, 2015, from virtually no above-water terrain as of a few months ago. Satellite imagery shows a minimum of 23 dredgers operating at Mischief on April 13, along with at least two dozen other large construction-related vessels within the lagoon formed by the circular reef. In that day’s satellite image, 28 concrete transport/mixing trucks can be seen, in addition to dozens of other large trucks and dozens of backhoes. 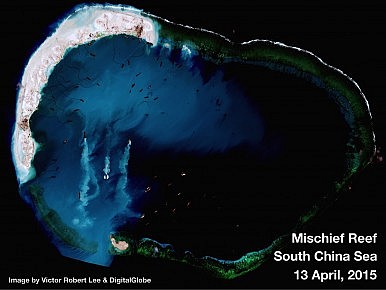 China is expanding its land fill across the northern rim of Mischief Reef as well, along a relatively straight portion of the submerged reef with dimensions that could support a landing strip longer than 3,000 meters. Imagery of the southwest rim of Mischief shows the complete filling-in of a large sector of reef in a mere eight weeks. 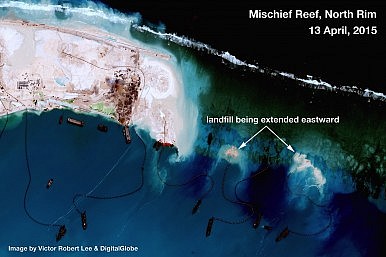 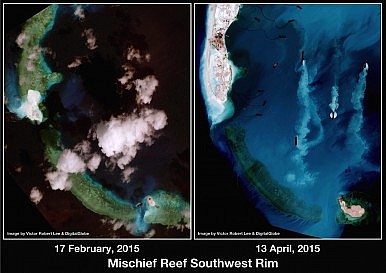 Subi, Mischief and Fiery Cross reefs are three of at least seven reefs in the Spratly Islands that have been filled in by China and are being outfitted for purposes that are most likely military in nature. 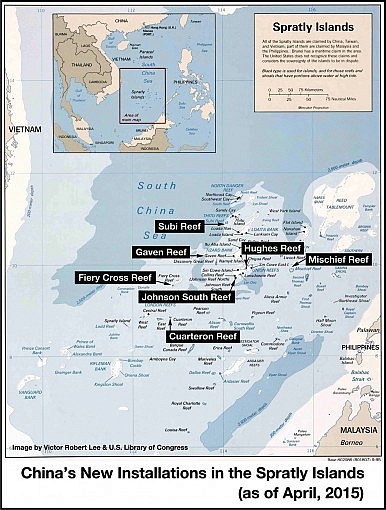 The speed, scale, intensity and remoteness of China’s ongoing manufacture of land and infrastructure within the South China Sea have few or no parallels in history outside of wartime. The frenzy of the ruling Chinese Communist Party’s building program in the Spratlys, a thousand kilometers from China’s shoreline, is a demonstration of its territorial intentions, as well as a show of the current government’s competency in swiftly executing massive projects to back up its ambitions. The result will be an enlarged international footprint for China’s military, submerging the territorial claims of weaker nations.

The latest satellite pictures show China building what appears to be a large runway on Subi Reef.