Satellite imagery of Subi Reef in the Spratly Islands taken July 18, 2015 shows intensive preparation of terrain for a likely airstrip. A straight segment of reef that China has filled in with sand can easily accommodate a runway more than three kilometers long. At a width of approximately 250 meters, this straight segment also could accommodate a runway accompanied by a parallel taxiway like that recently constructed by China at Fiery Cross Reef; the total width of the Fiery Cross runway plus taxiway is approximately 125 meters, with a runway width of 54 meters. (For comparison, the primary runway at the B-52-hosting Andersen Air Force Base on Guam is 3,414 meters long and 61 meters wide.) 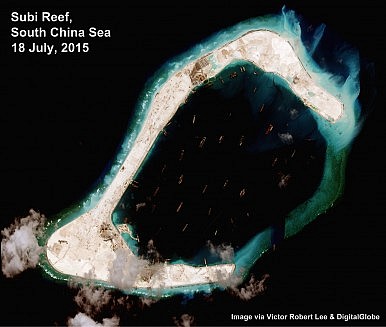 Approximately 48 large cranes are in operation on the likely area of the runway, carrying out a widely used dynamic compaction technique to compress dredged-up sand and coral cuttings in order to increase the stability of the substrate for the runway. Most of the dynamic compaction cranes present in the image from July 18 are accompanied by backhoes, which are used to fill in the craters left by the compaction weights dropped by the cranes. Notably, no compaction cranes are visible in areas of the filled-in reef outside the probable runway site.

Dredging at Subi has essentially been stopped. Two dredgers remain, only one of which is connected to a sediment pipe and may or may not be in operation; by contrast, on June 5, 2015, 14 dredgers were present. However, as of July 18, 54 large supply ships are present at Subi, up from 38 on June 5, signaling a ramp-up of construction now that land filling operations have ceased (except for efforts to widen the terrain at the north rim). 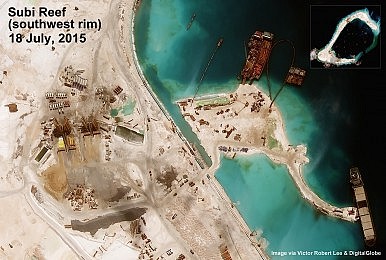 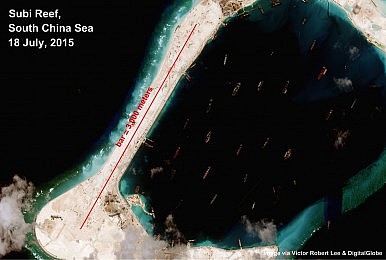 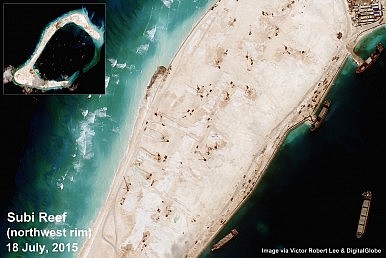 Subi Reef looks next in line for an airstrip, as building and reclamation continue with unprecedented speed.