What does it actually cost Chinese naval shipyards to build major warships? Chinese sources do not disclose actual or estimated warship and submarine production costs, so it falls on external analysts to generate this important dataset. Quantifying warship production costs bolsters our understanding of how China’s defense budget actually translates into hardware and capabilities.

This analysis focuses on the Type 054A (NATO codename: Jiangkai-II) frigate, for three primary reasons. First, it is China’s most prolifically produced large, modern major surface combatant. Second, it has been series produced for several years. Third, it is the cornerstone of the PLAN’s surface warfare capabilities at present and has actually seen sustained (and ongoing) operational deployments.

Readers should note that this is a “Beta Version” estimate of the Type 054A’s production costs. It is well-developed, but will almost certainly evolve as more participants contribute their insights. I share my core calculations and assumptions in order to provide a springboard for other analysts and hopefully catalyze a broader discussion that advances our knowledge of China’s naval-industrial complex.

This author estimates that the Type 054A currently costs a total of approximately $348 million per vessel to build and fit out (Exhibit 1). This estimate derives from breaking the ship down by its main systems categories (hull and equipment, propulsion/power transmission, weapons, and electronics) and calculating their respective costs, as well as the cost of the labor needed to assemble the ship into a finished product. The estimate relies heavily on valuation by analogy in many cases because Chinese sources simply do not disclose cost information on the vast majority of the inputs used in warships being built in China. As such, the figure as stands is conservative and may overestimate the construction and equipment costs. 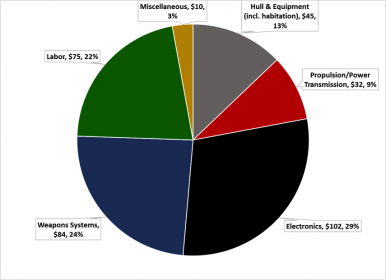 The next section elaborates sequentially on the Type 054A’s cost structure, with the areas that contribute the most to final ship cost addressed first.

Electronics: $102 million, 29 percent. Chinese military-grade electronics makers disclose little or no information on the unit costs of systems they produce for the People’s Liberation Army (PLA). Moreover, the PLA does not publish detailed budgets such as those commonplace in US DoD. As such, this analysis uses a valuation by analogy approach to estimate the likely cost of the ship’s main electronics systems. The ship’s ZKJ-4B/6 combat data system is said to be based on Thompson CSF’s Tavitac. The Naval Institute Guide to World Naval Weapons Systems, 1997-1998 estimated that the Tavitac accounted for less than 5 percent of the final cost of the French Lafayette frigate, which based on the US$466 million original unit cost of the six Lafayette-class frigates (“Kang Ding”) purchased by Taiwan in 1992, suggests Tavitac costs approximately US$20 million. Given the systems’ stated similarity, it is reasonable to value the ZKJ-4B/6 at US$20 million per unit.

The Type 382 3D search radar likely costs approximately $15 million per unit based on the price of the AMD radar system Saab sold to Australia for its Canberra-class LHD and the fact that Chinese radar makers likely have not yet attained the experience and efficiency level of Saab’s production process. The Type 054A’s sonar suite likely costs around $20 million, based on the unit cost of the Royal Navy’s Sonar 2087 and the procurement requirements the U.S. Navy used in 2005 when specifying the characteristics of a new towed sonar array. Finally, the author estimates that the Type 054A’s machinery control system costs $15 million, based on the fact that Northrup Grumman has contracted to supply the much larger LHA-7 amphibious assault ship’s machinery control system at a cost of $50.6 million. The author acknowledges that shipboard electronics costs may in fact be lower, although no data presently known to him supports a lower cost.

Weapons: $84 million, 24 percent. The most expensive part of the Type 054A’s weapons suite is likely the vertical launching system cells. An 8-cell module from the US Mk 41 VLS system – the most widely used in the world – costs around $15 million. The Type 054A has 32 total VLS cells and the author discounts the 8-cell module cost to $10 million, making the system cost an estimated $40 million. The second most expensive component of the Type 054A’s armament are its two Type 730 close in weapon systems (“CIWS”), which likely cost around $11 million for both. The U.S. Navy’s Phalanx Block 1B CIWS costs $5.6 million per unit, and the author believes this is a reasonable proxy for the Type 730 CIWS cost because although the Chinese gun is a larger caliber and the system is physically larger, the assembly and materials costs are likely substantially lower.

Labor: $75 million, 22 percent. While data is somewhat scarce, building and commissioning a frigate-sized warship of between 3,000 and 4,000 tons displacement appears to require between 2.5 million man hours (U.S. FFG-7) and 10.8 million man hours (India Godavari-class) of labor. The author estimates that at present, Chinese military shipyards, which can afford a higher degree of labor intensity than Western yards due to a large labor force, but which are also almost certainly substantially more efficient than Indian yards, require around 3.2 million man hours to build and commission a Type 054A frigate. Chinese yards’ average labor cost is based on the 2013 labor expenditures of Jiangsu Rongsheng, a top private shipbuilder, which are then increased by 25 percent to reflect the premium paid for special skill sets required for shipbuilding work done to naval specifications.

Hull and equipment: $45 million, 13 percent. This cost estimate is based on the fact that around one-third of the light ship weight of surface combatants such as the Type 054A typically consists of metals – primarily steel, along with lesser quantities of high-grade alloys and wiring and pipes. The author then multiplied the 1,200 metric tons of steel likely required for a ship the size of the Type 054A by an average cost of $2,000/metric tons for high quality steel such as that used in warships. The remainder of the cost comes from composite materials and radar absorbent materials, whose cost data was obtained from similar items sold on Alibaba.com and from the cost of applying radar absorbent coatings to frigate-sized U.S. warships, as disclosed by the Chicago Tribune (admittedly a bit dated as it is 1993-vintage). Cost data for paint, piping, pumps, valves, and wiring also come from similar Chinese-made items advertised for sale on Alibaba.com as well as the London Metals Exchange spot price for copper, the underlying component of wiring, and likely at least part of the pipe alloys.

Propulsion: $32 million, 9 percent. The biggest share of the Type 054A’s propulsion costs come from its four Pielstick/Shaanxi PA6 diesel engines. At least one trading company offers Pielstick engines for sale at between $1and $10 million apiece. This estimate uses the mid-range price of $5 million per engine to reflect the size of the engine and the premium quality needed for a military application. The balance of the estimated cost reflects the gearbox, drive shafts, steering gear, and props.

Miscellaneous costs: $10 million, 3 percent. This category is a “catchall” that helps the overall estimate account for bits and pieces that might have been overlooked in the process of estimating each ship segment’s cost.

The $348 million unit cost estimate dovetails reasonably well with the price at which China offered Type 054 frigates to Thailand in early 2013. Thailand’s Navy sought to spend $1 billion on new frigates and China reportedly offered three Type 054s at that price. China’s offer of ships at an effective price of $333 million each suggests that with higher international-level profit margins built in, the actual delivered ship cost is likely between $350 million and $375 million per vessel. In addition, the imported ships would likely cost less to build given that they are not as comprehensively capable as the Type 054As delivered to the PLAN.

If the Type 054A’s actual construction cost falls into this range, and the shipbuilders are allowed a five percent “profit” margin for ship deliveries to the PLAN, the delivered ship price would be $365 million. In procurement terms, this would offer the PLAN a significant value relative to the cost of foreign-sourced vessels. For instance, French shipbuilder DCNS has sold a FREMM class frigate to Morocco for $676 million and Germany’s first four F125 frigates are priced at $740 million apiece.

Military hardware spending always incurs an opportunity cost, since even a large and growing economy like China’s still has a finite amount of resources that can realistically be devoted to military expenditures. To put the cost of purchasing one Type 054A at $365 million into perspective, consider that the ship uses funds equal to each of the following alternative expenditures, all of which are in demand in various branches of the PLA:

A navy ultimately sails on the strength of the national treasury. In that respect, the PLAN increasingly gets a significant “bang for its buck” with ship acquisition costs that are much lower than those of other major Asia-Pacific naval powers. The analytical community now has the opportunity to create a unique warship cost dataset that will unlock powerful new avenues of inquiry into China’s naval modernization and defense spending.

Gabe Collins is the co-founder of China SignPost and a former commodity investment analyst and research fellow in the US Naval War College’s Maritime Studies Institute.

The Chinese Navy’s Destroyer Fleet Will Double by 2025. Then What?

China is about to finish the current phase of destroyer construction. What comes next?

What Will the Chinese Navy’s Next Frigate Look Like?

The U.S. Navy has chosen its next frigate; what will China’s look like?

China’s Military Advancements in the 2010s: Naval and Strike

Reviewing major and visible developments of the Chinese PLA Navy and missile force over the last decade.

Is a carrierborne FC-31 in the works? And what about Chinese 6th generation prospects?

China’s BRI Is Aggravating Ethnic Tensions in the Global South

By Gulalai Ismail and Alvin Camba

Pakistan’s CPEC is a case study in Chinese investment further disenfranchising ethnic minority groups – in this case, the Baloch.