China figured prominently in this year’s annual conference conducted by the Center for a New American Security (CNAS), which held the massive, all-day event at the end of last month in Washington, D.C.  While the event focused on global challenges from Russia and the Islamic State to technology and energy, one of four breakout sessions focused exclusively on “The Future of China.”

I moderated a panel with three smart academic specialists of China: Dr. Thomas J. Christensen of Princeton University and the author of the newly published book, The China Challenge: Shaping the Choices of a Rising Power; Dr. Jessica Chen Weiss now of Cornell University and who researches at the nexus of Chinese domestic politics and foreign policy; and Dr. Tai Ming Cheung, who is conducting pioneering work on Chinese military modernization and research and development at the University of California at San Diego.

The panelists provided depth and nuance to a series of questions, including many based on quotations from prominent experts, officials, and writers.  At the same time, the 200 luncheon guests, as well as others among the nearly 800 conference goers, were given the opportunity throughout the day to vote on three issues regarding China’s future.  Although no doubt lacking scientific rigor, the 70 or so respondents provide an interesting and surprisingly clear snapshot of Washington views.

First, conferees were asked whether Chinese hegemony in East Asia is (a) a fait accompli, (b) contingent on U.S. policy, or (c) highly unlikely.  Perhaps not surprising in any nation’s capital, the clear choice was centered on the host capital—in this case, “contingent on U.S. policy” (61%). Interestingly and perhaps in contrast to views in China, only one in four respondents thought China’s regional dominance “a fait accompli.”  Some China specialists and even former top U.S. officials argue that America must forsake any idea of primacy; while this was not the specific question, it seems a logical inference to suggest that perhaps this poll result is indicative of a high degree of skepticism with regard to China’s future power and purpose. 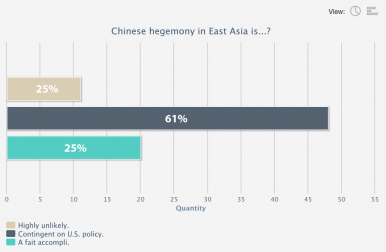 The second China question asked: As China’s power grows, U.S.-China relations in Asia are likely to be marked by (a) greater cooperation, (b) intensified competition, or (c) armed conflict.  An overwhelming 79 percent opted for “intensified competition,” with only 9 percent electing “armed conflict.”  This seems consistent with my general impression that most Washingtonians see growing but manageable competition with China.  This is not to endorse complacency. But it does suggest to me the need to avoid jumping to extreme pessimism or optimism: that is, with those who believe war is inevitable and those who seem a tad too quick to accommodate even China’s most brazen words and deeds, including island-building in the South China Sea. 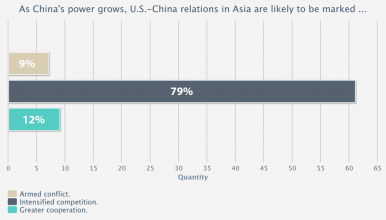 The third and final China question dealt with President Xi Jinping’s legacy.  Would history mostly remember Xi as a(n) (a) reformer, (b) authoritarian, or (c) failure?  Here the voting appeared to reveal just how inscrutable Xi remains to a Washington audience: only a slightly higher percentage (51 percent) forecast his legacy as an authoritarian than did those (45 percent) who thought Xi would be remembered as a reformer. Perhaps Xi and China can take solace in that very few indeed (4 percent) thought he would fail. 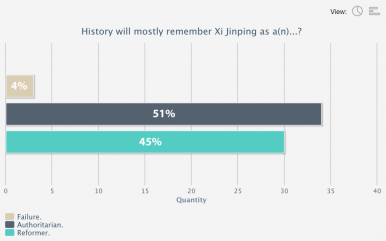 Other polling questions were geared to plenary sessions and other break-out sessions, but at least one general question regarding what the next U.S. administration may expect to face adds an important footnote to U.S. Asia policy.  While critics may be able to fault the articulation, execution, and resourcing of the administration’s policy of rebalancing to Asia, the CNAS polling suggested strong support for a general reorientation to the Indo-Pacific. At least 44 percent of those polled at the conference said that Asia deserved “greater time and attention” from the next administration.  The next most deserving regions were Africa (17 percent) and Europe (15 percent). 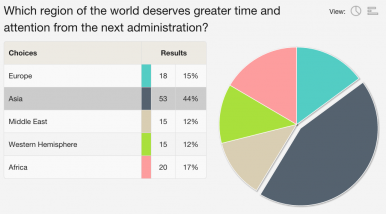 In closing, let me suggest my biggest take-away from this unscientific survey data: China and Asia are increasingly important to U.S. national security interests, and the future is not foreordained.  In particular, the next U.S. administration, far from disowning the rebalance to Asia, is likely to have to continue a gradual shift in economic, diplomatic, and military power to the Indo-Pacific region.

Dr. Patrick M. Cronin is Senior Advisor and Senior Director of the Asia-Pacific Security Program at the bipartisan Center for a New American Security (CNAS).

A new book offers a refreshing non-Western perspective on the implications of China’s rise.

The One Important Ingredient for Regional Hegemony That China's Still Missing

Hard power and wealth aren't everything in pursuing and maintaining hegemony.

What Could the United States Have Done – If Anything – To Prevent China's Rise?

The United States did not undertake the difficult and expensive steps necessary to prevent the economic and military rise of China.

A US-India Consensus on China's Belt and Road?

The Modi-Trump joint statement includes a curious paragraph. What does it mean?