This edition of our ongoing series of archaeological and historical sites of Asia will focus on Xinjiang.

This has been a rough year for China’s western province of Xinjiang, as ethnic tensions between Uyghurs and the Chinese government and ethnic Han mount. Amid charges of terrorism and cultural suppression, before Uyghurs and Han entered Xinjiang, there lies another Xinjiang, a treasure trove for archaeologists, historians, and religious scholars.

Xinjiang is fascinating. It is one of the driest areas in the world and is uniquely inhospitable. The large desert that dominates the region—the Taklamakan (said to mean the place that one does not leave once entering)—is almost completely surrounded by mountains, including the Pamirs and Himalayas, and steppes, unlike the Arabian and Sahara deserts. Xinjiang also contains within it the place in the earth the farthest away from any sea, the Dzoosotoyn Elisen Desert. It should come as no surprise then, that the region was one of the last on earth to be inhabited, well after agriculture was developed.

Most of Xinjiang is dominated by the Tarim Basin. It was here that the oasis kingdoms of antiquity developed. Archaeologists thus usually refer to the region as the Tarim Basin. Consider the image below: 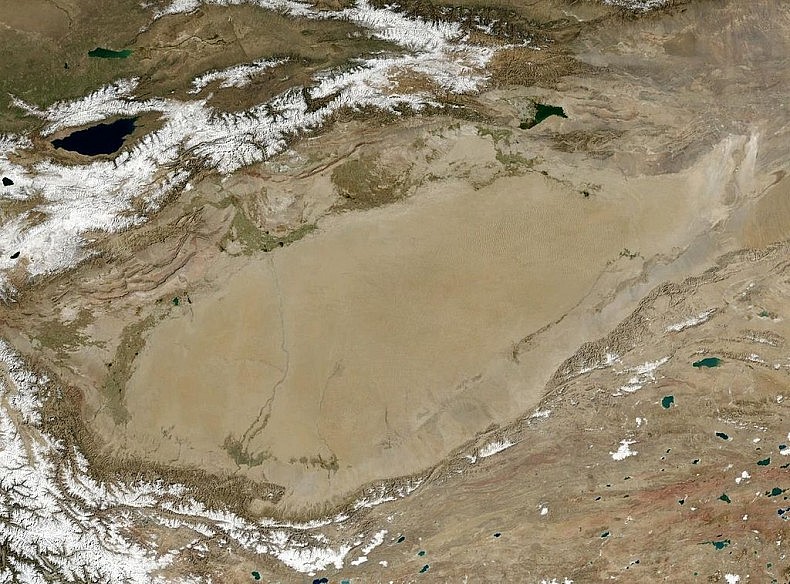 The interior of the desert is essentially impassable. City-states and merchants had to traverse the desert either along the northern or southern edges, which later comprised two branches of Silk Road routes.

The first inhabitants of Xinjiang entered from central Asia to the west by 1,800 B.C.E. and were the Tocharians, a Caucasian-type people who often had red hair or blue eyes, as confirmed by the discovery of the Tarim Mummies. The Tocharian language was a unique branch of the Indo-European language family, and most of the Tocharians lived in the northern part of the Tarim Basin. The southern portion of the Tarim Basin was eventually settled by people speaking Eastern Iranian languages but influenced by Sanskrit, Pali, and Gandharan, such as Khotanese, which is close to modern Pashto. Many of these people settled in small oasis communities.

The expanding Han Chinese dynasty discovered these communities in Xinjiang in the 130s B.C.E. and eventually made contact with the prosperous Central Asian city-states of Samarkand and Bukhara. This stimulated increased trade through Xinjiang in both directions, a process accelerated by the Kushan Empire, founded by Tocharians and spanning the region from northern India through Afghanistan into Xinjiang in an arc. As a result of the Kushans, Buddhism became prominent in the Tarim Basin. The first millennium C.E. was the golden age of the Tarim Basin, as various Buddhism city-states thrived along the Silk Road: Kashgar, Khotan, Turpan, Kucha, Niya, Loulan, among others. 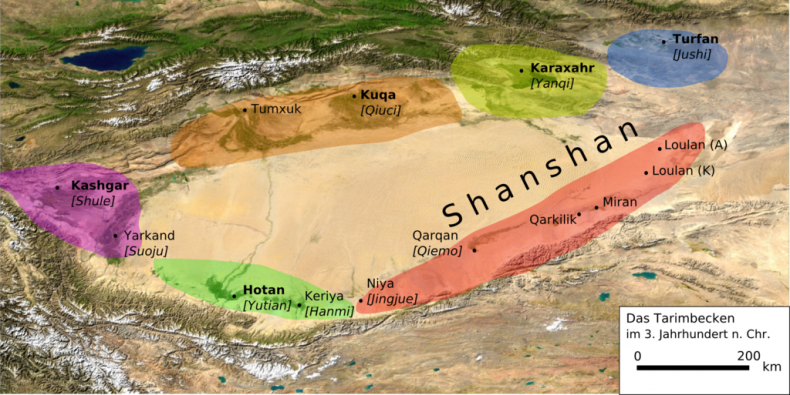 The most prominent of these states was the Kingdom of Khotan that lasted from 56-1006 C.E. There was a particular burst of prosperity during the Tang Dynasty protectorate over the region that lasted from around 650-755 C.E. when the An Lushan Rebellion broke out. The Tang soldiers garrisoned throughout the region provided stability from attacks by nomads and also spent money in the region. Khotan has multiple Buddhist temples and was a prosperous trading zone. Along the hills of the Silk Road, there were numerous Buddhist caves that are well preserved today because of the climate. Two especially famous Buddhist sites include the Kizil Caves in northwest Xinjiang and the Bezeklik Thousand Buddha Caves in northeast Xinjiang. The Kizil Caves contain among the earliest Buddhist temples in today’s China. The Bezeklik caves had Buddhist activity up to the 14th century and preserved many valuable murals and texts.

Unfortunately, all good things must end. Trade gradually shifted more and more to cheaper oceanic voyages, more capable of carrying bulk between India, China, and Persia. China entered a period of chaos after the fall of the Tang Dynasty and the new Song Dynasty was relatively small and powerless to protect the city-states of the Tarim Basin that were ravaged by Tibetans from the south and Turkic peoples, including the Uyghurs from the north. The Uyghur Khaganate, a state on the steppes of Mongolia collapsed in 840 C.E. and the Uyghurs fled into the Tarim Basin. Some in the eastern parts assimilated the Buddhist culture of the Tocharians and lasted for several hundred years. Other Uyghurs became Manichean. Another Turkic group that migrated to today’s Kazakhstan, the Karakhanids began raiding the Persianate Samanids in control of Samarkand in the 900s; seizing that city and pushing east, they conquered Kashgar in Xinjiang. One of the Karakhanid leaders, Satuq Boghra Khan converted to Islam, beginning the mass conversion of Central Asian Turks to Islam; he then obtained a fatwa that allowed him to kill his pagan/Buddhist father and become king. The Karakhanids then fought against Khotan for several decades. Khotan took Kashgar in 970 but eventually lost it and Khotan itself fell in 1006 to one Yusuf Kader Khan. The Turkic poet and father of Turkic grammar, Mahmud al-Kashgari was there and witnessed the events penning this poem: “We came down on them like a flood/We went out among their cities/We tore down the idol-temples/We shat on the Buddha’s head.”

Eventually the Uyghurs assimilated the previous people of the region; the whole region came under Mongol rule later and was eventually completely Islamicized by the 14th century. Eventually the Qing Dynasty conquered the now-poor area in the 18th century for strategic purposes.

Several activists well-known for picketing the Chinese consulate in Almaty have reportedly been detained in Kazakhstan.

Ethnic Kazakhs who fled Xinjiang are caught in an awkward vortex of domestic politics, international pressures, and the legacies of ethnicity and nationalism in Kazakhstan.

In Almaty, Kazakhstan's former capital and largest city, a group of mostly old women have continued to protest Chinese policies in Xinjiang.