Locally 3-D printed drones, a 3-D holographic command table, “supercavitating” torpedoes evaporating the water around them, laser weapons and an electro-magnetic railgun are just a few of the features of the battleship of the future, according to a team of young British engineers.

Designed as part of an informal challenge by the U.K. Ministry of Defense (MOD) and Royal Navy, the concept ship — dubbed the Dreadnought 2050 (the original HMS Dreadnought was a Royal Naval battleship commissioned in 1906, “which represented such an advance that all other major warships were rendered obsolete” according to a press release — is a trimaran made of ultra-strong acrylic see-thru composites and powered by a fusion reactor or highly efficient turbines rendering it an extremely silent and quite deadly stealth vessel. 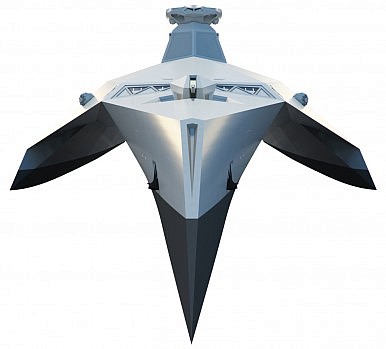 The main objective of the MOD tech challenge was to come up with the most modern surface warship design possible, given current budgetary limitations. According to Startpoint, an organization of the Royal Navy tasked with managing the Dreadnought 2050 project, “the mission is to tackle parallel challenges of providing advanced technology set against the backdrop of funding constraints.” And “while some of these technologies push today’s boundaries in science and engineering, there is no reason why elements could not be incorporated into future designs,” according to Muir Macdonald, a senior executive at Startpoint.

The Dreadnought 2050 would be submersible “to present a lower profile which would make the ship more stealthy and even harder to detect.” Instead of a mast the vessel would sport a tethered quad-copter. “This tether would be made of carbon nanotubes and cryogenically cooled in order to transmit significant power to the quad-copter for multi-spectral sensors and act as a high-power (i.e. laser) weapon to knock down enemy missiles or aircraft,” the press release states.

The ship’s crew would consist of around 50 to a 100 sailors, rather  than the 200 strong crew found on today’s warships, with the vessel’s nerve center, the Operations Room, staffed by five rather than 25 people. 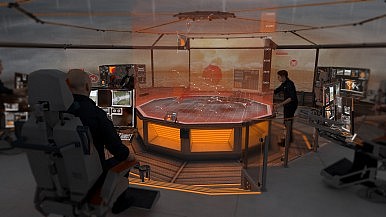 “There would be an electro-magnetic  railgun at the bow, capable of firing projectiles the same distance as today’s long-range cruise missiles; and at the stern there would be a ‘moon pool’ or floodable dock area to deploy Royal Marines and other troops on amphibious raiding missions, or unmanned underwater vehicles (UUVs) to detect mines,” according to the press release.

“Above the floodable dock would be a large, extendable flight deck and hangar for multiple remotely piloted air systems (RPAS/UAVs), many equipped with weapons, which could target the enemy without putting the crew in harm’s way,” it continues.

The Dreadnought 2050 would also be equipped with “missile tubes for defensive hypersonic (i.e. Mach 5 plus) missiles, directed energy weapons to stop small enemy craft loaded with explosives; and in the armas (the outrigger hulls) would be torpedo tubes to fire super-cavitating torpedoes capable of 300+ knots.”

The prototype is being tested at advanced range and groundwork for at-sea testing is in place.

Plan to guide procurement, training, reforms to compete with China and Russia.

The new weapon system travels 50,000 the speed of an incoming intercontinental ballistic missile.