Pew Research has published some fascinating data on how Asian publics perceive each other. A new report from the group, based largely on survey data from the Spring 2015 Global Attitudes survey, entitled “How Asia-Pacific Publics See Each Other and Their National Leaders,” finds that Asians generally view their neighbors positively, with “Japan judged most favorably.” Pew’s polling of Asian publics finds that many “express limited confidence in the region’s most prominent national leaders when it comes to their handling of international issues.” 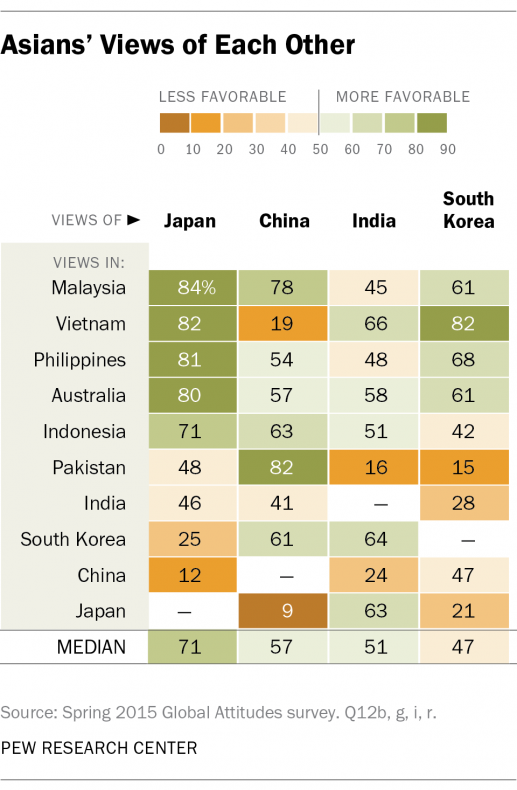 First, a note on methodology. In the favorability matrix from Pew, there are a few oddities. Perhaps the starkest is that Pakistanis find South Koreans as less favorable (by a hair–1 percent) than India, an unlikely reality. Part of the reason for results like this is due to how Pew processed survey responses from those respondents in the answering country that had “no opinion” about a particular target. The more respondents state “no opinion”–as 65 percent of Pakistani and 52 percent of Indian respondents did for South Korea–the lower the favorability assessment. It’s well likely that many of these undecided South Asia respondents may ultimately view South Korea favorably, but that didn’t factor in here. Meanwhile, Pakistan’s favorability score for India is more telling since fewer Pakistanis would have “no opinion” about India.

A major finding of the survey that’s telling about international perceptions in Asia is how Japan is perceived. Tokyo is almost universally perceived positively across the continent, with the exception of  publics in South Korea and China, where it received favorability scores of 25 and 12 respectively. India and Pakistan posted comparatively low favorability ratings for Japan when compared with Southeast Asian states and Australia, but as noted above, this is due to the fact that “more than a third of Indians and Pakistanis say they have no opinion about Japan.”

Japan’s positive showing attests to the country’s continued perception as a status quo power. Though public opinion tells us little about what causes Tokyo to be perceived positively across the region, it’s likely that Tokyo’s years of overseas investment and development assistance, combined with the recognition of Japan as a complex and prosperous economy, have led to positive views of Tokyo. That South Korea and China share strong and unfavorable views toward Japan also highlights the continued salience of Japan’s historical aggression during the Second World War.

As seen in the matrix above, China’s perceptions across the region are also noteworthy. Japanese respondents viewed China less favorably than any other two-state pair. Even Vietnam, where the media has spent considerable time covering Chinese activities in the South China Sea, wasn’t quite as cool toward China. India, meanwhile, seems to have a mostly lukewarm reputation across the region, with most states seeing the country neither in starkly unfavorable nor favorable terms—Pakistan, of course, is the one exception.

Finally, Pew presents some data that’s seldom seen: how Asian publics view leaders that aren’t their own. The dataset is somewhat limited: we have views on Xi Jinxing of China, Shinzo Abe of Japan, and Narendra Modi of India. In general, however, when asked if they have confidence in each of these leaders “to do the right thing in world affairs,” most respondents were’t too rosy. A few notable points: just 7 percent of South Koreans think Abe is cut out to “do the right thing,” and, similarly, 7 percent of Pakistanis have the same to say about Modi. Curiously, Malaysians are positive about the two East Asian leaders: 72 and 73 percent of Malaysians believe Xi and Abe respectively will “do the right thing.”

Bruce Stokes walks through the reports key findings in greater detail over at Pew’s website.

Populism may be surging in the West, but it's a phenomenon across the Asia-Pacific as well.

The Sino-Russian partnership has growing appeal for other countries (including India) as the West flounders.

While New Delhi’s desire to cultivate closer defense ties with Tokyo is clear, its overall strategic approach is much less so.

Winners and Losers From Asia’s Year of the Rooster