As we leave Vietnam and cross into Cambodia, a country infamously remembered in history for the brutal reign of the Khmer Rouge, we stop in the small border town of Khpob Ateav for our first look at how Cambodian life differs from that of the Vietnamese.

“Ok, you can take pictures, but don’t put me on Facebook,” the man decided after a few minutes of consideration. Judging by the way the rest of the dock workers had looked to him for instructions when we arrived, he was the boss. With his approval secured, the air of apprehension over the presence of two foreigners dissipated and the crew returned to the task at hand: loading a rickety wooden barge with 50kg sacks of sugar and thousands of cartons of cigarettes.

We were back on Cambodian soil after completing the Vietnam leg of the A River’s Tail project and the economic disparity between the two countries was immediately apparent in the dusty border town. Whereas the majority of buildings on the Vietnamese side of the border were made of modern materials, just a few hundred meters into Cambodia, wood had replaced concrete. 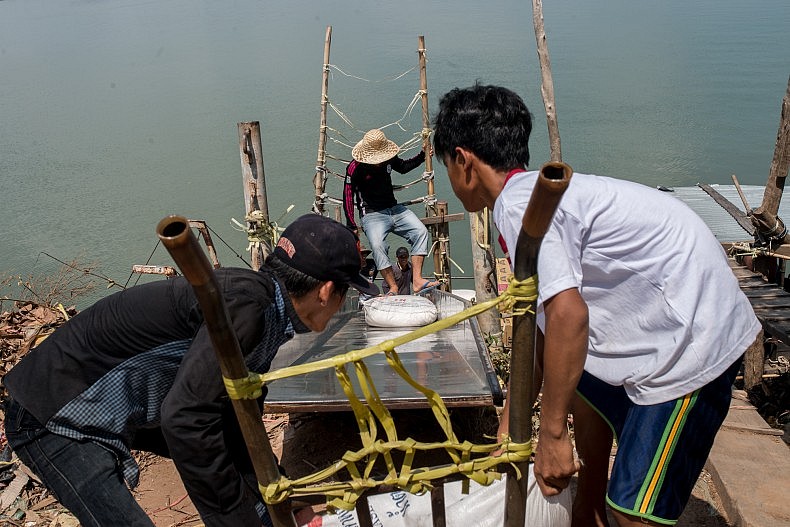 Men load cargo on the Cambodian side of the border. Photo by Luc Forsyth.

As we watched the men slide cargo down a metal ramp into the hold of a small transport vessel, the varying scale of the extent of the respective countries’ activities on the Mekong were also apparent. A sporadic line of yellow buoys stretched across the Mekong marked where Vietnamese waters ended and the purview of Cambodia began, but they were hardly necessary. A line of immense cargo ships dotted the horizon on the Vietnamese side while, only a few small craft drifted in the Cambodian currents. 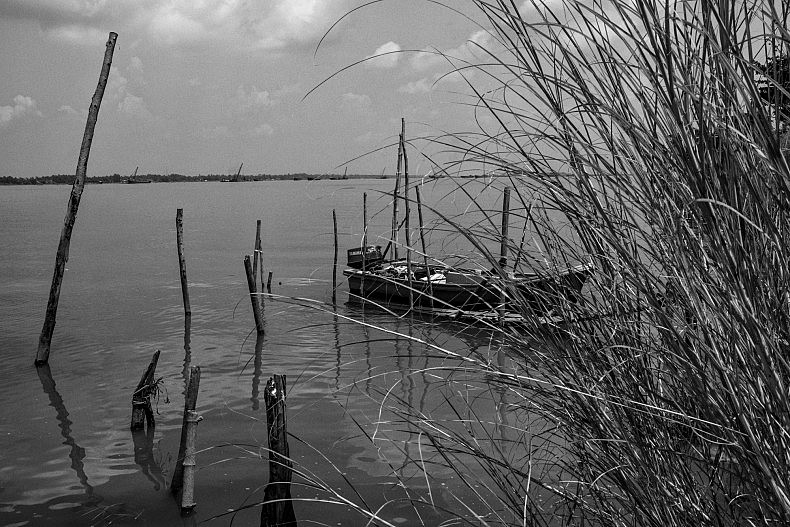 A boat used to transport goods between the main land and small islands that dot the Mekong where Cambodia and Vietnam meet on the river. Photo by Gareth Bright.

Though Gareth, Pablo, and myself all called Cambodia home, after three weeks of exploring the Mekong in Vietnam it was easy to forget just how different the two countries were.

A Time For Corn

Moving away from the border and following the river north along highway 101 towards Phnom Penh, corn was everywhere: heaped in great piles in front of thatched houses, growing in expansive brown fields to the west of the road, and spread across the asphalt, the orange kernels drying in the sun on swaths of tarpaulin that forced our Toyota Camry to slow to a crawl as we veered around them. Knowing Cambodia to be a nation of rice farming, the overwhelming dominance of corn was not what we had expected to see. 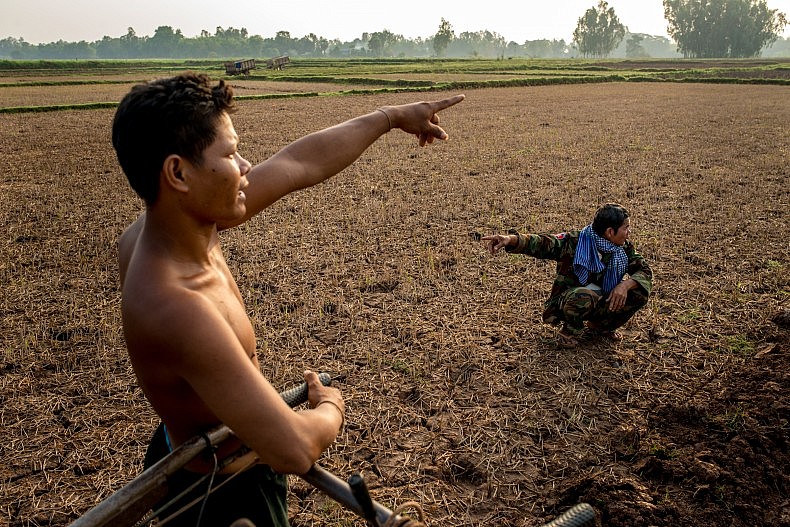 Yong Yang, 35, and Chheng Tre, 59, are farmers on the island of Peam Reang. Corn is a primary crop on the island during the dry season when there is not enough water to support rice. Photo by Luc Forsyth.

“Here we grow different crops depending on the season,” 59-year-old Chheng Tre explained. “During the dry season [in April and May] it is corn, then I will switch to growing beans, and then back to rice when the rains come.” Clad in camouflage military fatigues with a blue checked traditional Khmer scarf known as a krama, Tre looked more like a retired revolutionary than a farmer but spoke with a calm authority that was difficult to question.

According to Tre, a kilogram of fresh corn could be sold to a broker for 720 riel (around 17 cents U.S.), with dried kernels fetching slightly more. By comparison, even the lowest grade rice sold for between 25 and 30 cents, with more premium strains – such as long grain jasmine – fetching more than 40 cents. The fact that farmers like Tre would bother to grow a crop with such a lower potential for profit was indicative of the pronounced infrastructural differences between Cambodia and Vietnam. 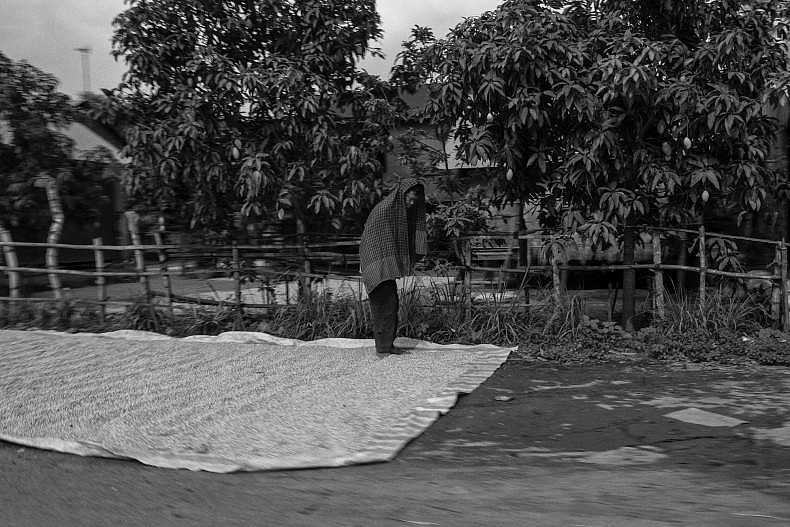 A man tends to drying corn kernels in the village of Khpob Ateav. Corn is the primary crop grown in the dry season when there is not enough water to support rice. Photo by Gareth Bright.

It seemed obvious that, if given the choice, farming rice was the more profitable option. But as Yong Yang, a 35-year-old farmer and friend of Tre’s told us, “Rice needs a lot of water, so we have to wait for the rains.” In contrast, the farmers in Vietnam – among the largest rice exporting nations, both regionally and globally – were growing three harvests of rice per year, regardless of the season.

How Vietnamese farmers, less than 50km away and geographically separated only by an artificially imposed land border, were able to circumvent the realities of nature owed to the complex network of irrigation canals that criss crossed the Mekong Delta. On the Cambodian side of the border, though there was little difference in the size and flow of the river, there was no such system. 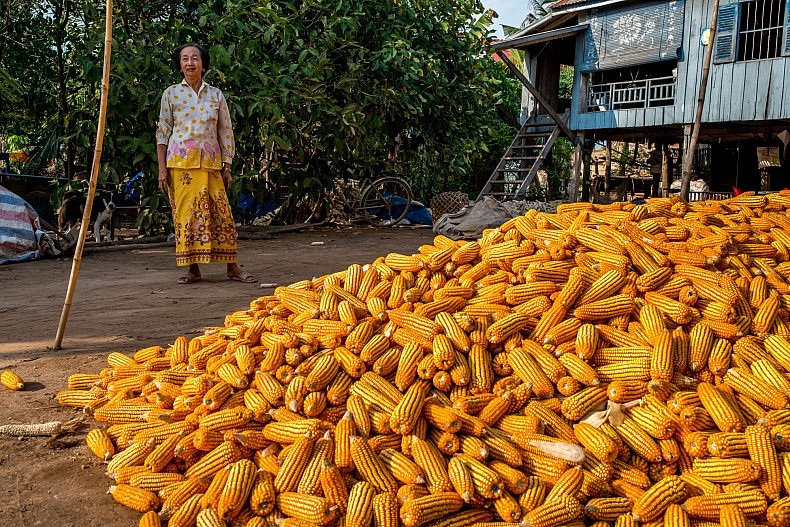 And so, reliant as they were on small gasoline powered pumps to divert the Mekong onto their fields, Cambodians grew corn – which needed far less water to survive than the temperamental rice.

What first struck us as odd about this method of corn production was that we had rarely, if ever, seen Cambodians cook with corn. While grilled corn on the cob was a popular street food snack, the farmers we visited near the border were not keeping the ears intact. Rather they fed them into a series of grinding machines separated the kernels from the cob which they dried in the sun until they were far too hardened to be enjoyable for human consumption. 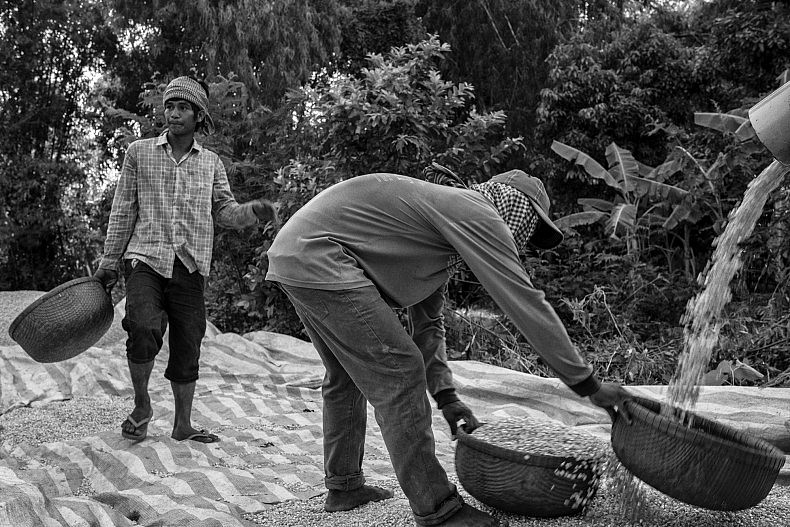 A machine spits out dried corn kernels after speparating them from the cob in the village of Khpob Ateav. Photo by Gareth Bright.

Just to be sure our ignorance of Cambodian cuisine wasn’t causing us to jump to conclusions, I called a friend in Phnom Penh to ask if her family ever used the small pieces of corn for cooking. “No, never,” she replied, her bewilderment at my strange question apparent.

“No, it’s for animals,” Chheng Tre said when we asked him to resolve the mystery for us, greatly amused by our confusion. “It is sold [to] Vietnam [or Thailand] where they feed it to cows.” 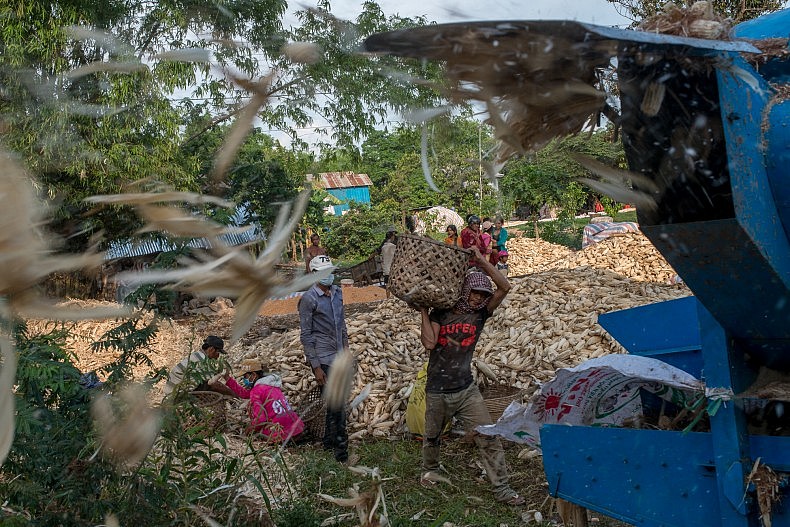 A machine separates the husks from ears of corn in the village of Khpob Ateav. Photo by Luc Forsyth,

With a newfound understanding of interconnectedness of the riparian economies, we spent the rest of the day photographing the corn refining process and speaking to the people who relied on the crop to financially weather the harsh agricultural conditions of the dry season. A Pho Bo (beef noodle soup) eaten on the streets of Saigon, we had learned, might owe its existence to Cambodian corn, fed from the waters of the Mekong. 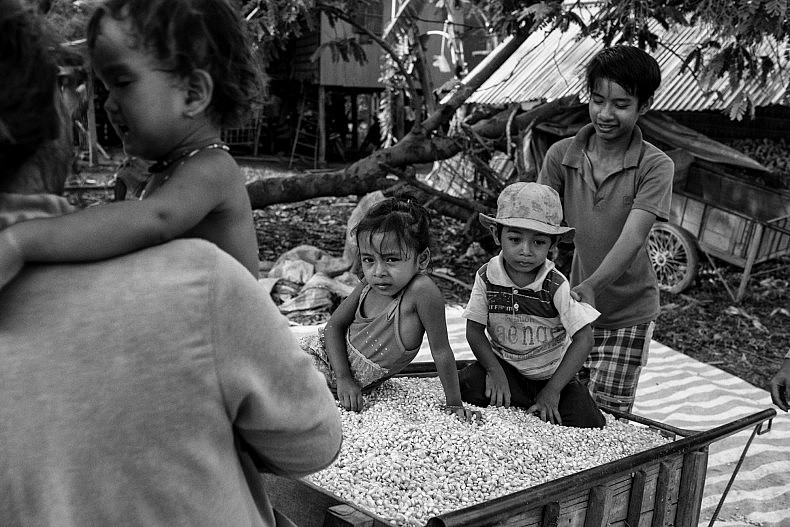 A family in Khpob Ateav. Most of the corn is sold to wholesalers which distribute it in Vietnam and Thailand as animal feed. Photo by Gareth Bright.

We left Tre and his fellow corn farmers once the sun had dipped below the horizon and returned to our hotel to get as much sleep as possible. The next day promised yet another pre-dawn wake up so that we could explore the effects of river erosion on the communities who lived along its banks.

The Bunong vs. The Sesan II Dam

For the indigenous Bunong people, a desperate battle against the Sesan II dam will decide if their community has a future.

In Cambodia’s far north, the Mekong is under threat from one of the most controversial environmental project in the country.

The Tonle Sap is Southeast Asia’s largest lake and Cambodia’s main source of protein, but all is not well on the Great Lake.

Cambodia’s Tonle Sap River is the conduit that connects the Mekong to the largest lake in Southeast Asia.

The Social Costs of Chinese Transnational Crime in Sihanoukville

Unrestricted and unregulated development has allowed crime to flourish, and eroded the trust between Cambodians and Chinese expatriates.