Wednesday morning’s edition of North Korea’s Rodong Sinmun has a striking lead story above-the-fold: Kim Jong-un inspecting what is purported to be a North Korean miniaturized nuclear device. Pyongyang is once again claiming that it has successfully accomplished the important milestone of miniaturizing a nuclear device for mating with its KN-08 inter-continental ballistic missiles (ICBM), which may be able to reach the western coast of the United States. U.S. and South Korean officials have expressed concerns that North Korea may have accomplished this feat, but until today North Korea had not made any imagery of its purported miniaturized devices available. 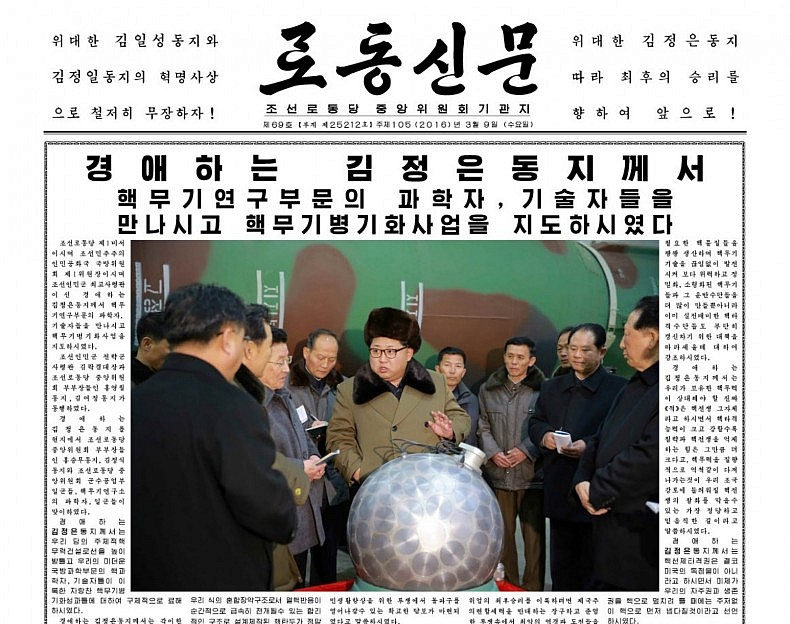 The images show Kim Jong-un, surrounded by a coterie of advisers and nuclear scientists, inspecting what appears to be a shiny silver orb, which appears to be roughly the size of an exercise ball. The device resembles at least some known schematics for implosion nuclear bombs, the most common design for nuclear weapons. (For instance, see the schematic here, which shows an Iraqi design.)

From the images alone, it’s unclear just what sort of device we’re seeing. Keep in mind that in January, North Korea, with its fourth nuclear test, claimed to have tested a thermonuclear device, which is a considerably more sophisticated device than the simpler fission devices it was thought to have tested in its 2013, 2009 and 2006 tests. Thermonuclear bombs also, in general, produce a considerably higher explosive yield. Most nuclear experts didn’t think that the January 6 nuclear test involved a true thermonuclear bomb, given the test event’s seismic signature and other indicators.

What’s worrying with the newly released images is a diagram seen behind Kim Jong-un that, despite being blurred, offers enough detail to suggest that it is a diagram of the Teller-Ulam design for a thermonuclear weapon. As Melissa Hanham, a North Korea-watcher at the James Martin Center for Nonproliferation Studies, noted, it’s unclear if the device seen in today’s Rodong Sinmun is a standalone implosion device or, in fact, the “primary” in a thermonuclear device.

There remains the possibility that the device could, in fact, be a standalone implosion device and the Teller-Ulam diagram in the background is part of the staging to reinforce North Korea’s claim of having achieved a fully staged thermonuclear device. Despite these ambiguities, Hanham told me that the device “looks pretty serious.” “It’s very hard for us to determine or for them to demonstrate the capability short of testing it on the tip of a flying missile,” she adds. North Korea has, to date, never tested its KN-08 ICBM.

The timing of the release of these images is notable. The United States and South Korea started their annual Key Resolve and Foal Eagle exercises two days ago. The exercises regularly provoke aggressive rhetoric from the North Korean side; this year, Pyongyang claimed to have readied its nuclear weapons for a preemptive strike. Moreover, the United Nations Security Council unanimously adopted resolution 2270 last week, which placed unusually harsh sanctions on North Korea for its recent nuclear test and satellite launch. Pyongyang made its displeasure with the new sanctions known as well.

North Korea claims to have tested a two-stage thermonuclear device ready for use in an ICBM.

North Korea is getting to the point where it'll have nuclear-tipped ballistic missiles ready to fly.

North Korea is gearing up for another round of highly destabilizing weapons tests.

Time to Rethink US and South Korean Approaches to North Korea

In approaching North Korea, doing the same thing over and over with sanctions simply won't work.

How Has the Russia-Ukraine War Impacted Cambodia’s Foreign Policy?

The country and its prime minister, Hun Sen, have been unexpectedly outspoken about Ukraine's plight.

Sean Turnell, 58, was arrested shortly after the February 2021 coup and spent more than 600 days in prison.

What If The Communist Social Bargain Breaks Down In Laos?

The economy is stagnant and discontent is on the rise. But don't bet on a mass uprising against the ruling communist party.