Ground forces have been the backbone and main strength of the People’s Liberation Army (PLA) since its foundation in 1927. The following is a list of the modern Chinese PLA’s most important equipment. Because a comprehensive listing would be impractical for both the author and reader, only the main and important emerging systems are listed here. In comparison with U.S. Army equipment, PLA Army equipment shows much greater diversity. This reflects a higher level of investment in fielding new systems, but may also suggest an inability to control the number of armaments projects. Having too many different systems may prove cumbersome to support logistically.

Although other sources have more information and entries, this list covers the PLA’s most important current systems and is a useful reference to both China hands and casual readers.

The QBZ-95-1 and QBZ-95B-1 5.8-mm carbine assault rifles are the basic individual weapon of the PLA. 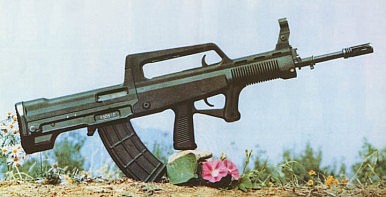 The PLA is set to field a new type of 5.8-mm rifle (possibly designated Type 05*) with an integrated 20-mm grenade launcher. PRC media claim it looks like something out of science fiction and netizens jokingly call it a “strategic infantry rifle” due to its powerful appearance.

The “Harbin” Z-19 reconnaissance/attack helicopter is an improved variant of the Z-9. It is named after the Harbin Aircraft Manufacturing Corporation (HAMC) which developed it. 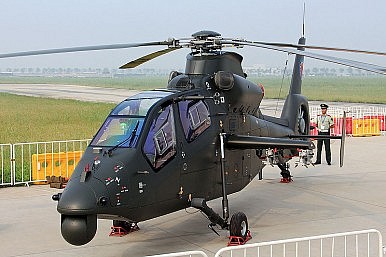 The Z-9WA is another improved version of the Z-9 and carries ATGM, rockets, and other airborne weapons. 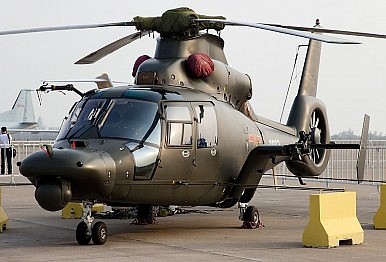 The Z-10 is China’s first attack helicopter and has been retrofitted for use in multiple roles. 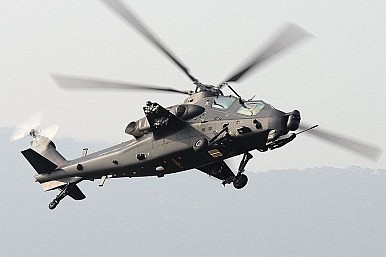 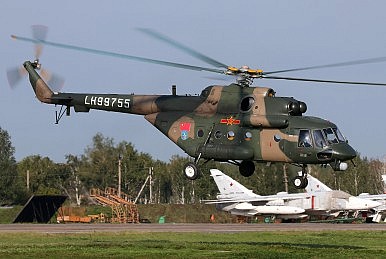 The ZTZ-96A is an updated second-generation tank. It features a light-weight, compact structure and low profile. Its fire control and EIS systems are comparable to the Type 99, but it has less maneuverability and fire repellency. Type 96A became a “star tank” for its performance at the 2014 Tank Biathlon in Russia. 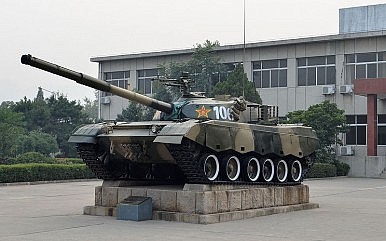 Developed by China in the 1990’s, the ZBD-04 belongs to the latest generation of IFV. It is equipped with guns and automatic cannons and is effective against tanks, armored fighting vehicles, fortifications, and infantry, among other targets. Its primary missions are combined arms operations alongside tanks and independent operations. The Type 04 appeared on Chinese state television during the Shanghai Cooperation Organization’s (SCO’s) 2014 Peace Mission counterterrorism exercise in Inner Mongolia. 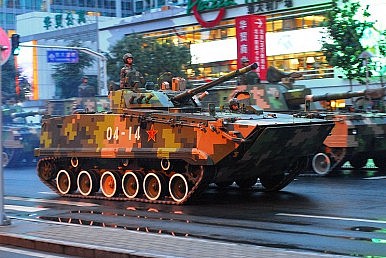 First fielded in 2009 and displayed in the National Day parade that year, the ZBD-09 IFV (no picture) is equipped with a main gun, anti-tank guided missile (ATGM) launcher, and twin machine guns. Its primary missions are attack and defense.

The ZTD-05 Advanced Amphibious Assault Vehicle (AAAV) has a high-caliber gun and floats in water. It is a tracked vehicle and highly maneuverable across multiple media, although it lacks the survivability of a MBT. The PLA likely intends this vehicle for use in any island campaign in the East and South China Seas, up to and including Taiwan. It first appeared in the 2009 National Day Parade. Chinese media claim it is “the most powerful amphibious fighting vehicle in the world.” 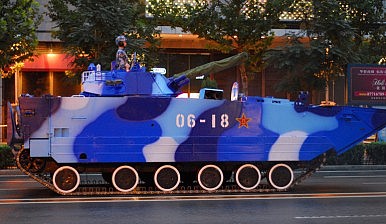 The ZBD-11 Amphibious Assault Vehicle is the main vehicle of the Army’s Quick Reaction Force. It appears to be built on ZBD-09 chassis and made first appearance in 2015 parade. Its quick reaction mission suggests that the PLA is able to transport and deploy this vehicle quickly. 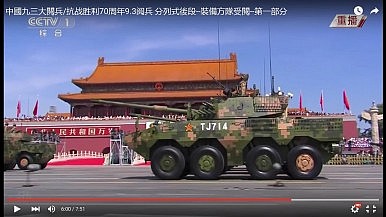 The 2015 parade featured an undesignated Advanced Assault Vehicle. The CCTV commentator described it as the next generation of China’s combat, command, and light weaponry vehicles. The PLA has likely incorporated U.S. lessons from Afghanistan and Iraq to balance deployability, speed, and light armor in this vehicle. 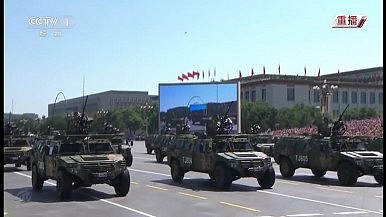 The PTL-02 100-mm wheeled self-propelled assault gun uses high bore pressure to penetrate up to 500 mm of armor on vehicles and fortifications within 1,500 m. It made its first appearance at Peace Mission 2005, a joint counterterrorism exercise with Russia. 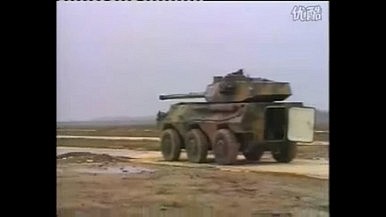 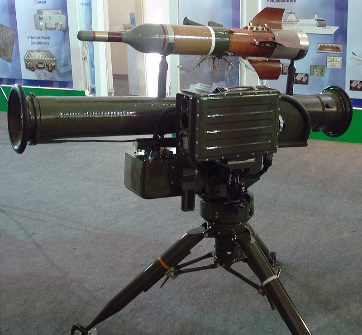 The HJ-9 is a Chinese-made third-generation ATGM. Its strengths are high firepower and accuracy, long range, and anti-jamming and night-fire capabilities. 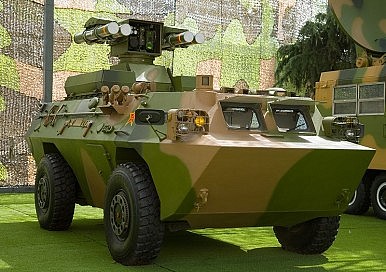 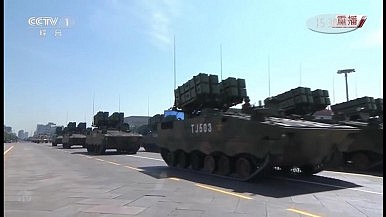 A prototype HJ-12 was displayed at the 2014 Zhuhai Air Show. It is thought to have variants adapted for vehicle-mounting and airborne forces. 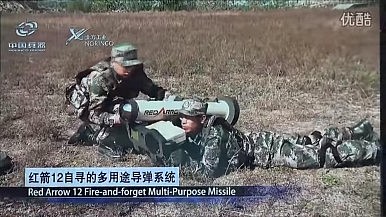 The PLA’s PLZ-07 is a self-propelled 122-mm tracked howitzer designed to replace the PLZ- 89. Developed by China, it is a third-generation gun based on a second-generation IFV chassis. It features improved speed, maneuverability, and survivability as well as digitization. It is the dedicated artillery piece of PLA armored brigades. 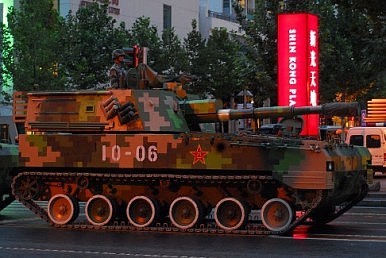 The PLZ-05 is a self-propelled 155-mm tracked advanced cannon-howitzer developed in China. Based on the PLZ-83, it fires NATO standard ammunition to ranges of up to 50 km. 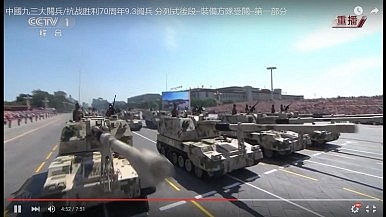 The PLZ-83 is a self-propelled 152-mm tracked cannon-howitzer. 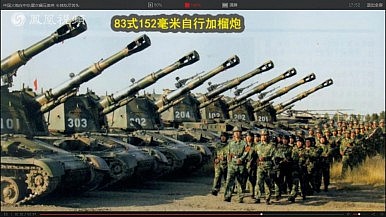 Carrying a compliment of twelve rockets, the PHL-03 is the PLA’s new 300-mm multiple rocket launcher. A Type 03 rocket unit consists of four to six transporter erector launchers (TELs, i.e. the firing vehicles), four to six ammunition vehicles, and one command vehicle. Note that this is a relatively short-range missile. It is the PLA’s independent Second Artillery controls China’s strategic long-range missiles. 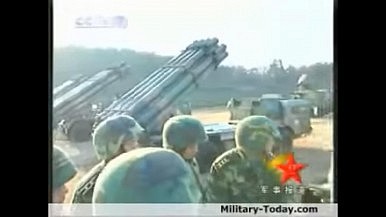 A new model of modular, self-propelled, tracked 122-mm rocket artillery system first appeared in Peace Mission 2014. Its range is up to 60 km and it is allegedly the only one of its kind. 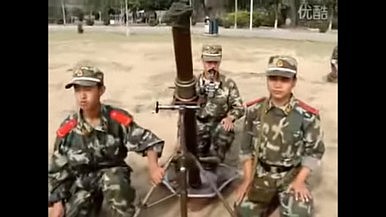 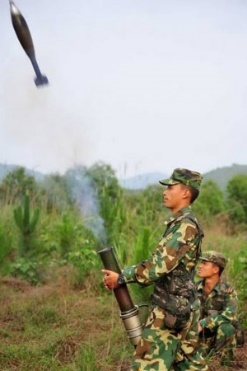 The PGZ-04 is a self-propelled 25-mm tracked air defense system. Developed in China, it is an update of the PGZ-95 and features both missiles and AAA guns. It is particularly effective against helicopters and cruise missiles. 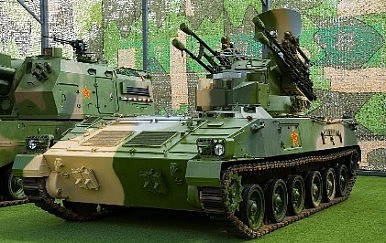 Similar to the WWII Gepard, the PGZ-07 boasts dual 35-mm anti-aircraft cannons, one of only three types of dual 35-mm AAA in the world. The PLA describes its 1,000 rounds per minute rate of fire as “staggering” and its exterior as “sleek.” 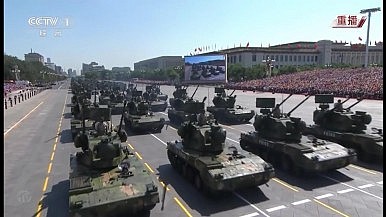 The HQ-7B Air Defense Missile System was developed in 1988 and appeared in the 2009 National Day Parade. It is highly accurate, maneuverable, and equipped with anti-jamming capability. It has both land-based and marine variants. 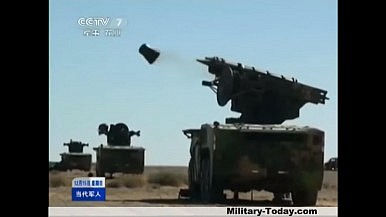 What Are China’s Military Recruitment Priorities?

The recruitment priorities of China’s military reflect, among other things, its growing technological sophistication.

Beijing is heavily investing into the development of longer-range UAVs.