Satellite imagery from March 2, 2016 shows a marked expansion of China’s dredging and land filling at North Island in the Paracels. The newly manufactured terrain links North Island with Middle Island, along a long and straight reef structure that could accommodate a runway and parallel taxiway with dimensions equivalent to those recently built by China at Fiery Cross Reef in the Spratlys. The new land fill at North Island is 12 kilometers north of Woody (Yongxing) Island, the site of a military base and China’s sole airport in the Paracels. Woody Island was also the site of the PLA’s deployment of HQ-9 surface-to-air missiles last month. 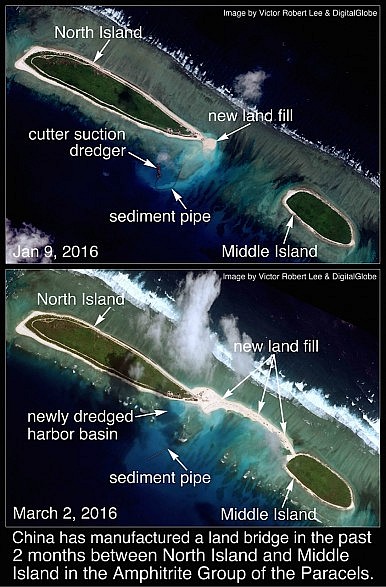 The new land filling operations by China at North Island, first observed in satellite imagery from January 9, 2016, have in the past two months included dredging of the reef to create the beginnings of a harbor basin. The cutter suction dredger observed in January is absent in the current imagery, but the sediment pipe assembly for pumping dredged sand remains. The absence of the dredger in the most recent image probably does not represent any cessation of island building at this site, since the new terrain currently visible has yet to be fortified to survive storm action. 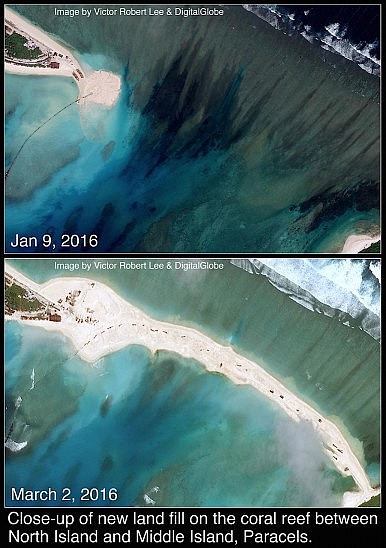 The island-building activities at North Island are at too early a stage for their purpose to be discerned. Lying at the northern edge of the Paracel Islands, 300 kilometers southeast of China’s Yulin/Longpo naval base, North Island is well situated for sensors to monitor an area through which Yulin-based surface and submarine vessels must frequently pass. 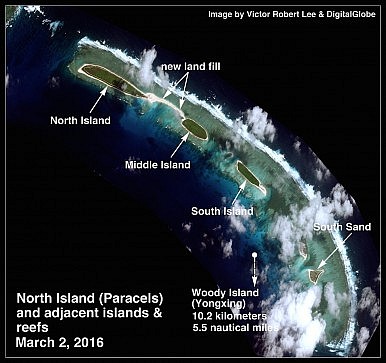 The reef complex that includes North and Middle islands has a favorable size and geometry for an airstrip, and it occupies a total area of approximately five square kilometers. The land fill area at Fiery Cross, for comparison, is just under three square kilometers, slightly smaller than Woody Island. 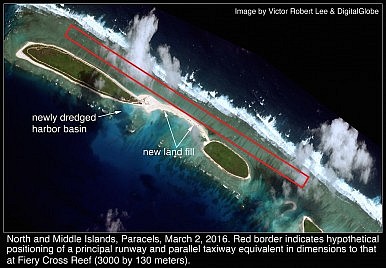 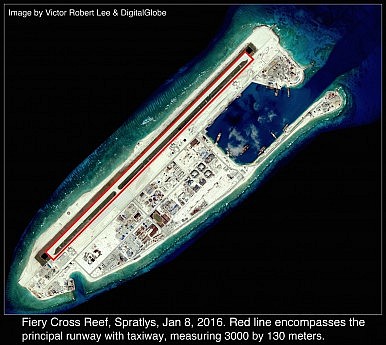 North Island’s proximity to the air base at Woody Island would seem to make it an unlikely candidate for an airstrip. However, Woody is already crowded with military and civilian facilities, and there is little adjoining reef to support an expansion. Woody’s congestion is illustrated by the placement of the recently deployed HQ-9 surface-to-air missiles. Although reported to be positioned on “a beach,” satellite images (not displayed here) show that the site was not a beach but newly filled-in terrain that had been an area of shallow fringing reef waters as recently as December 2015, and was only filled in during January 2016, probably just days before the SAM mobile launchers rolled onto it.

With a single, potentially over-stretched, air base in the strategically important Paracels, and already three airstrips in the Spratlys (at Fiery Cross, Subi and Mischief reefs), it would not be surprising if China were to build another air base in the Paracels, even if located near Woody Island.

A new helicopter base is seen for the first time at Duncan Island in the South China Sea.

New PRC South China Sea Bases No Cause to ‘Relax’

Yes, massive China construction in the South China Sea is cause for concern.

New additions to ‘Sansha’ City and a naming exercise for submerged features are the latest in Beijing’s sovereignty-seeking toolkit.

The U.S. State Department said it was “seriously concerned” by the incident.