When Ieng Ty first stepped onto Otres beach in southern Cambodia, it was empty. He stood for a while, looking over translucent green waters to the hazy blue sky. Behind him, scrubby trees swayed in the firm breeze. An upsetting memory surfaced and, for a second, the surf sounded like the raspy breath of those people he’d seen starve in dry rice fields. He shuddered and wondered what to do next.

It was 2001, just four years after the last of the Khmer Rouge generals defected to the government ending the last chapter of a civil war that had raged ever since the ousting of the Maoist regime by Vietnamese forces in 1979. They had marched people from their homelands and forced them to work on collectivized farms. Around two million people died in the subsequent purges, famine and fighting.

Ty rubbed his sun-blackened skin; he felt the wounds of having home and history ripped away almost physically. He looked to his younger sister who had survived by clinging to him through those awful years. They had heard that there was money to be made from the slow trickle of tourists who had started visiting the coast. He looked back out to sea. Lush islands mushroomed in the distance.

The first years were difficult. Otres had no road, electricity or running water. “We built a little restaurant but we didn’t get many customers at first,” Ty says. “But two or three locals would come and sometimes foreigners too. We earned around $10 per day.”

Today, Ty’s restaurant has become a popular beachside venue and hotel. He also has a small shop and tour company specializing in trips to local islands. He employs 18 members of his extended family. He’s located on a small strip of independently owned bungalow resorts and bars that cater to Westerners who like the independent, secluded atmosphere. “I like it because it’s really natural and undeveloped,” says Alexa, an American backpacker, enjoying a sunset stroll on the sand.

But Ty will soon be forced to leave. His sister, Rath, shows me the eviction notice. She points out a word in bold in the penultimate paragraph. “This is a strong word,” she explains. “It says we must leave by 13th of March.” The notice, served by government officials, goes on to say the government will not be responsible for any damage to their property after that date. All of the businesses on Otres received the same note. Bungalows, kitchens and sun beds belonging to over two dozen businesses will be bulldozed. 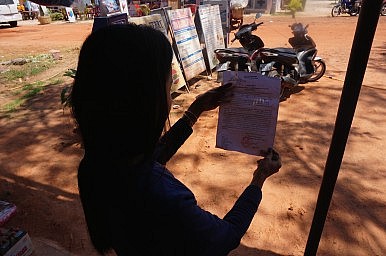 The trouble for Ty and other business owners on Otres is that they have no legal right to be there. Like the rest of Cambodia’s coast, the beach was designated as “state public land” as part of the 1992 Land Law, making it illegal to buy or sell. So they do not own the land on which they operate. “The site will be cleared according to our law,” says provincial governor, Yun Min.

But Ty and other operators feel aggrieved because they have all paid money to have businesses on Otres. The prices for soft deeds and licenses have increased with the tourist traffic. The number of overseas tourists visiting Cambodia has doubled since 2006, reaching close to 5 million last year, and is expected to increase a further 3 million by 2020, according to government figures. In recent years, soft deeds to property on Otres have been changing hands for $50,000-$100,000, with the money going to officials connected to the government, according to a report in the Phnom Penh Post.

“There will be no compensation,” says Yun Min. He is speaking at a press conference, mopping his brow under the beating sun. The location for the meet is on Independence Beach, a few miles down from Otres. It’s the site of a development owned by former provincial governor, Sbaung Sarath. The wall and shell-like condo building have been demolished because the land there is also “state land” and needed to be returned to the government. Yun Min says he chose this location to show that even wealthy people were being evicted.

The reclaiming of Otres beach and the nearby Independence and Ochheuteal beaches is part of a plan to develop the coastline “step-by-step,” according to Yun Min. But the government have been cagey about detailing their plans. “We’re clearing the land for environmental reasons,” says Yun Min. “It’s in the public interest to preserve the beach for the next generation.” No government official has commented further but Yun Min encourages local people to “support their government’s plan to develop the beach.”

Developmentally, Cambodia is at a tipping point. In 2015, its per capita income was projected by the World Bank to reach $1,096, surpassing the $1,045 threshold for classification as a lower-middle-income country. This means that foreign aid, which has long been propping up the nation’s coffers, will start to reduce. As the government gears up to meet its target of becoming an upper-middle income country by 2030, new sources of revenue need to be exploited.

Otres beach, with its friendly bungalows and long, untouched stretch of sand is loved by locals and tourists alike. But, looking at it with an economic eye, it’s an underutilized asset in a country that needs to find new ways to support itself. “It’s good the government is trying to enhance its assets like any other country,” says David Van, managing director in Cambodia for the consultancy firm Bower Group Asia. “A good development would also impact significantly on local employment,” he added.

There are already plans to build an enormous casino with up to 3,000 hotel rooms on Otres. In fact, 1500 meters was sold to London-listed company Queenco in a joint deal with ex-governor, Sbaung Sarath. “The company aims to develop a destination beachfront resort based around a casino,” reads the Queenco website. It is unclear whether this specific development will go ahead as the area of the beach has remained empty since its sale in 2008.

Ty isn’t against the development per se but he needs to support his family. Facing the destruction of 16 years of hard graft with no compensation has left him clutching at straws. “If the government wants to develop the land, I agree with them,” he says. “But I demand they give me some other plot on a different beach so I can continue to work.” His request for an alternative plot, along with other pleas, was delivered by 100 business owners from Otres and Ochheauteal beaches to the National Assembly on February 19. There has been no reply.

At the press conference, a woman speaks up in a trembling voice. She asks governor Min if the present businesses would be allowed to continue their trade within the new development. The governor smiles, “I have forwarded all requests to the central government,” he says before thanking the people for “supporting the government’s plan to develop the beach.”

Today Ty and Rath look out, not onto an empty beach, but onto a clean, well-tended, slightly ramshackle, holiday destination. Customers lay on sun loungers while other holidaymakers stroll past, enjoying the three mile, unbroken walk from one end of Otres to the other. For them, this journey of 16 years looks set to finish with a violent bulldozing. “What can do we do?” says Rath. “We have no power. We can only cry and be sad.”

The ‘Mafia’ and Civil War in Myanmar

The Cost of Cambodia’s Development

By Nathan A. Thompson

The country has grand plans, but not everyone is a winner.

Cambodia has long been presented to the world through the viewfinders of foreign photographers – but that’s slowly starting to change.

In his final stronghold, the Khmer Rouge leader is remembered differently.

Education in Pakistan Amid COVID-19: A Test Case for Policymakers

The nation's school system has faced unprecedented crises in the past year.

Why Did Japan Award Bhutan’s Dago Tshering with the Order of the Rising Sun?

An international award for a man many view as responsible for a generation of ethnic cleansing pain.

After the last American soldier departs Afghanistan in September, India and Pakistan will be left with some very difficult, unsavory, choices.

The land code protests of 2016 were a rare occurrence and yielded a rare outcome: a shift in state policy.

China Urges US to Play Constructive Role in Gaza Diplomacy

Despite the rocky road ahead, Hong Kong’s opposition politicians must not give up on the political arena.

China’s Warning to Bangladesh on the Quad

The comments from the Chinese ambassador show Beijing's insecurities on the issue.