Both Afghanistan and Pakistan have stepped up their military presence in and around the border town of Torkham at the end of the Khyber Pass, after repeated clashes that so far have killed two and wounded 22 at the main crossing point between the two countries, Reuters reports.

Both sides have moved an unknown number of reinforcements including heavy weapons to Torkham. The town is located along the porous Durand Line, and the busiest border crossing point between Afghanistan and Pakistan connecting the Afghan province of Nangarhar with Pakistan’s Khyber Agency.

As The Diplomat reported, a fierce firefight erupted late Sunday between Afghan Border Police and Pakistan’s Frontier Corps purportedly after a Pakistani attempt to erect a gate on the border. The fighting stopped Monday morning. “This gate [is] considered essential to check&verify documentation of all border crossers. Will check move of terrorists,” General Asim Bajwa, chief spokesman for the Pakistani military, said on June 13 via Twitter.

Fighting resumed Monday afternoon when Pakistani forces tried to resume work on the border gate, according to Dawn newspaper. “Afg[ha]ns firing at Torkham on under construction gate by Pak on Pakistani side.As explained in pic [see image below],Gate is 37 Meters inside Pak-1,” Asim Bajwa tweeted. 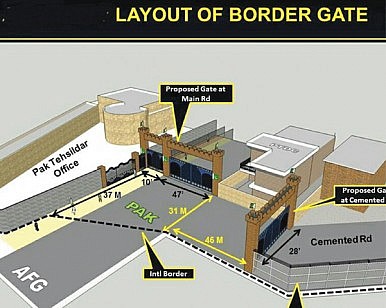 A Pakistani officer, Major Jawad Ali Changez, who was wounded during the firefight died Tuesday. One Afghan soldier was also killed, according to Afghan officials. Six Afghan and nine Pakistani soldiers were wounded, according to Reuters. Al Jazeera also reports that up to ten civilians were wounded in the clash.

“The government of Pakistan expresses its deep concerns about the security of Pakistani soldiers near the border, in relation to the reports of unprovoked attacks that are unhelpful in Pakistan-Afghanistan relations,” the office of Pakistan’s Prime Minister, Nawaz Sharif, said in a press release.

“We have the right to protect ourselves and no one should look down at us when it comes to defending our sovereignty and integrity,” Afghan government’s chief executive Abdullah Abdullah said on Twitter.

“We currently have agreed on a ceasefire with Pakistan. We hope this problem will end through the work by diplomatic addresses,” he also noted. “The current fight Pakistan started doesn’t help anyone’s interest.”

Afghanistan summoned Pakistan’s ambassador to the country to protest the eruption of violence. Similarly, Pakistan summoned the Afghan charge d’affaires in Islamabad.

“The best way to address the issue is through diplomatic ways,” said Afghan Ministry of Foreign Affairs spokesman Shekib Mustaghni on Tuesday, according to Tolo News.

Tensions have been high at the Afghan-Pakistan border crossing over Pakistani visa requirements.

Whatever the New US Strategy in Afghanistan, It Can't Succeed Without China

Without China's buy-in, any attempt to mediate between Afghanistan and Pakistan is doomed.

The Emerging India-Afghanistan Front Against Pakistan

Evidence is gathering that India and Afghanistan will band together to counter Pakistan.

What Lies Behind Modi’s Nepal Visit?

By Bipin Ghimire and Apoorva Pathak

The choice to visit Lumbini for Buddha's birthday was carefully crafted both religiously and geopolitically.