“Dhobi ke kutte jaise halat hain hamere… kahi ke nehi hain hum.” Using this Hindi proverb, which signifies being stranded between two worlds without belonging to either, Narinder Singh summed up the predicament of the Sikhs and Hindus of Afghanistan living in India.

Although predominantly a Muslim country, Afghanistan has long been home to non-Muslim minorities such as Sikhs and Hindus, who played significant role in the socioeconomic and cultural life of the country. Yet even during the best of times in Afghanistan, a section of the majority population refused to accept members of these communities as fellow “Afghans,” instead looking down upon them and treating them as second-class citizens. Numbering over 50,000 in the early 1990s, the numbers of Afghans Sikhs and Hindus have dwindled significantly over the years and merely a handful remain in Afghanistan today under trying conditions.

A complete generation of Afghans has witnessed only conflict for the past 30 years, thanks to various forms of violence: from actual war to the ferocity of minefields and the destruction of livelihoods, which pushed a third of Afghanistan’s population to exile. A combination of structural failures and the rise of Islamic fundamentalist ideology in post-Soviet Afghanistan led to a virtual civil war and ethnic cleansing.

The political turmoil impacted the lives of every Afghan adversely, but the position of the religious minorities was particularly vulnerable. Afghan Sikhs and Hindus encountered widespread persecution, struggled with prejudice, and faced uphill battles to preserve their culture and religious tradition. The systematic targeting and the illegal grabbing of their businesses and property added to the trauma of civil war and resulted in their en masse exodus in the early ’90s. Based on their ethnic and religious similarities to a segment of the Indian population, these communities found incentives to seek asylum in India.

The 1951 Refugee Convention and the 1967 Protocol  – the two major international instruments governing refugee treatment — have 140 signatories, an overwhelming majority of the world’s 190-odd nations. India is not among them; it has signed neither. There hasn’t been any official pronouncement of the reasons behind that, although India’s concerns seem to be largely security related. In absence of overarching refugee legislation, successive Indian governments have dealt with asylum issues on an ad hoc basis whereby certain displaced communities have been officially treated as “refugees” while others, like the Afghans, were not.

The case of the Afghan “refugee” has been a tricky one. Officially recognizing them as refugees would have meant a comment on the political situation of their home country. Considering India’s long-standing friendly relations with Afghanistan, India perhaps wanted to avoid that. As a result, the Afghans in India have largely been recognized and protected under the mandate of the United Nations High Commissioner for Refugee (UNHCR).

Due to lack of data, it is difficult to estimate the exact number of Afghans living in India. According to a study carried out in the late 1990s, there were approximately 60,000 Afghans living in India, of which merely 16,000 possessed UNHCR certificates. According to the UNHCR New Delhi Factsheet 2016, India currently hosts 13,381 refugees and asylum seekers from Afghanistan, mostly settled in and around the capital. Khalsa Diwan Welfare Society, an organization run by the Afghan Sikhs and Hindus in India, however, assesses the current size of these communities to be over 15,000; that is after the bulk of them migrated to Western countries over the past decade.

Those under UNHCR protection have had access to identity cards recognizing them as refugees, which entitles them to certain other basic services, such as healthcare, education, and assistance in the naturalization process. Over the years, UNHCR policy has undergone shifts; in the recent past its assistance has been directed more toward “ethnic Afghans,” although the religious makeup of Afghans in India has always been tilted toward Sikhs and Hindus. 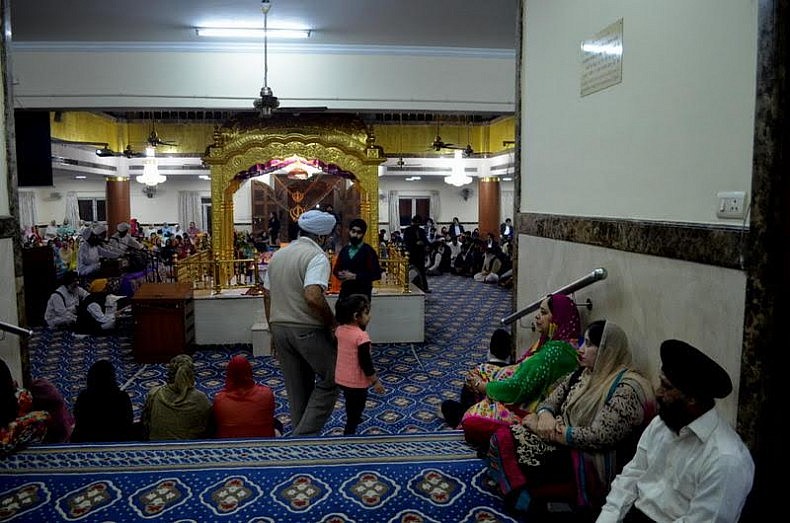 Those religious minorities who came to India after 1989 were victims of widespread discrimination and fled after they had lost virtually everything. Returning to Afghanistan was not an option for most. In the absence of the host government’s recognition, protection, and overall guidance to deal with the changed circumstances in an alien land, life in India has been extremely challenging for the displaced Afghan population. They were required to wrestle with innumerable difficulties, be it self-settlement, visa issues, or making a living in an environment where even legal refugees are not allowed to work. The bulk of them thus found employment in the country’s parallel economy.

While there is no doubt that non-recognition from the government as refugees meant lack of access to certain basic rights and privileges, at the same time it also implied that Afghan Sikhs and Hindus were not required to carry the “refugee” tag — an identity which is seldom viewed positively by the host population. Therefore, although the lives of Afghan Sikhs and Hindus have been punctuated by intricate patterns of struggle, confrontation, and resistance, yet their adaptation and acculturation experiences at a certain level might have been benefited from  the prevalent order. Since assistance was not forthcoming, these communities demonstrated an incredible amount of strength, unity, and resilience to deal with the challenges of their settlement phase in India and to a large extent succeeded in coping with those issues.

For the persecuted religious minorities of Afghanistan, who have been living in India for decades, naturalization appears to be the best solution. UNHCR recognition enabled some of them to acquire temporary residence permits from the Indian authorities and therefore, a right to stay in the country. In India, the path to gaining full protection is only possible through citizenship. Foreigners lack access to basic rights which Indian citizens are entitled to by virtue of the Indian Constitution (such as the right to an education, the right to public employment, and protection against arrest and detention in certain cases). The Citizenship Act of 2005 stipulates that citizenship can only be acquired by those who have ordinarily (legally) been resident in India for 12 years. Yet due to a lack of governmental initiative and complicated bureaucratic processes and bottlenecks, only a few have been able to complete the naturalization process.

A Ray of Hope?

Recently, policy changes under the Bhartiya Janata Party (BJP)-led government have been welcomed by the Afghan Hindu and Sikh communities in India. The Home Ministry sought the cabinet’s approval to initiate the process to grant citizenship to persecuted religious minorities of Afghanistan, Pakistan, and Bangladesh. Apart from the provisions and rights, the news brings hope of finally being able to “belong” to a country.

As a 26-year-old Afghan Hindu girl puts it: “Indian citizenship is not just an official status for me, it is an ‘identity’ — which I have been missing all my life.”

Over the years these communities have been lost between two worlds. For decades they had to negotiate and renegotiate with various identities as a survival strategy in their home and host countries; this development promises to bring a closure to that. But above all, the sense of anchor and belonging is what they have been longing for. Due to lack of capacity or willingness, both the Afghan government and the international community have failed in their moral (and arguably legal) obligation to defend the rights of Afghanistan’s oppressed religious minorities.

India on the other hand, despite its thrust upon a people-centric Afghanistan policy, has largely chosen to ignore the plight of Afghans living within its territory. But the recent decision to offer citizenship to these communities promises to be a welcome departure from that position. This step is likely to play a vital role in healing the wounds of decades of oppression and marginalization faced by the Afghan Sikhs and Hindus both in their heritage and host societies.

Anwesha Ghosh is a research scholar at the Willy Brandt School of Public Policy, Germany, specializing on Afghanistan. She is the author of the books titled Afghanistan from ‘Enduring Freedom’ to ‘Enduring Chaos’: Implications for India (2012) and A Leap Forward: Capacity Building, Education and India-Afghanistan Cooperation (2014), published by Knowledge World Publishers, New Delhi.

The Indians Still Stranded in Afghanistan

At least 100 Indians are waiting to be evacuated from Afghanistan, with New Delhi offering little help or information.

For Afghan Refugees in India, Hopes Dim for Returning Home

The Taliban blitz toward Kabul left refugees already in India feeling isolated and farther from home than ever.

India Must Champion the Cause of Afghan Refugees More Inclusively

Even as it leads global action on Afghanistan at the UNSC, India must salvage its own credibility as a hospitable destination for asylum seekers.

Taliban 2.0: The End Game for Afghan Sikhs and Hindus?

By Visakh Mathews and Sukanya Bali

Sikhs and Hindus have lived in Afghanistan for generations, but the end of that era is near.

Can Anwar Ibrahim Bring Stability Back to Malaysian Politics?

While the November 19 election resulted in a victory for his multi-ethnic Pakatan Harapan bloc, the forces of conservative Malay nationalism have perhaps never been stronger.