Cambodian painting, along with all of the country’s arts, suffered dramatically during the brutal reign of the Khmer Rouge. At the country’s darkest hour, artists, intellectuals and anyone else who didn’t fall in line with the blood-thirsty regime were systematically killed.

While the nation’s ancient cultural heritage – embodied most significantly in Angkor Wat – is famously well preserved, its other arts have not fared so well. The kingdom’s collection of paintings is a prime example.

Borany Mam, a French-Cambodian art restorer, decided to do something about it. After completing an art history degree, she joined the Ecole de Condé in Paris in 2006 to master the art of restoring paintings. In 2012 she moved to Phnom Penh where she founded the Association pour la Sauvegarde de la Peinture Khmère (ASPK), an association which aims to preserve Khmer paintings from the 18th and 19th centuries at the National Museum of Cambodia.

Mam, who was born in Poitiers, France to a French mother and a Cambodian father, was driven to follow her path for personal reasons as well as her passion for art restoration. Her father fled the kingdom with four friends to study in France only three days before the country fell to the Khmer Rouge in 1975. He never saw or heard from his family again.

The Diplomat spoke with Mam about the impact of the country’s violent past on its arts, the urgent need to preserve Cambodia’s painting heritage and the new life that young artists are breathing into Phnom Penh today.

Can you briefly tell me about your connection to Cambodia while growing up and what inspired you to move to Phnom Penh?

Unlike my sister or my brother, I have always wanted to discover my roots, to learn more about my father’s past. But before our first family trip in 2000, Cambodia was a taboo subject at home. A native of Phnom Penh, my father left the city in 1975, three days before the fall of the country. He went to France to study. He never heard from his family again.

So the first trip in 2000 was a kind of revelation for the whole family and especially for my father. From there, all of his buried memories resurfaced and he started to open up. He told us about his happy childhood with his siblings, his mother who pampered him because he was the oldest boy, his Vespa rides along the river and his weekends in the countryside at his grandparents’ house. He gave us the image of a carefree childhood in a blooming Phnom Penh full of trees where life was sweet.

Since that time, Cambodia became one of the main topics of conversation in our family until we moved to Phnom Penh four years ago.

In the beginning it was a family decision. After many return trips, my parents decided to move to Phnom Penh just for a period of time every year. After I got my painting restoration diploma, my partner and I decided to give it a go and finally moved to Cambodia too.

What first interested you in art, and more specifically art preservation?

Since I was a child, I was interested in the arts as my great-grandfather was a painter. This influenced me, as most of his paintings were hung on the walls of my grandparents’ house. This made me curious about the arts.

I decided to take some drawing lessons. After taking my university’s entrance examination, I chose to focus on the art theory concentration within my Art History major. After three years, I tried to look for something more practical. That was the reason I started a restoration school where I could combine theory and practice related to the field I was passionate about.

I was immediately interested in the link that the restorer creates with his painting work. We strive to restore a painting’s former splendor. Sometimes, months elapse before the piece comes back to life. All of those hours spent examining, stripping, repairing, or treating a painting lead us to understand its history, to love and respect it.

More than just a profession, it is for me a real passion. 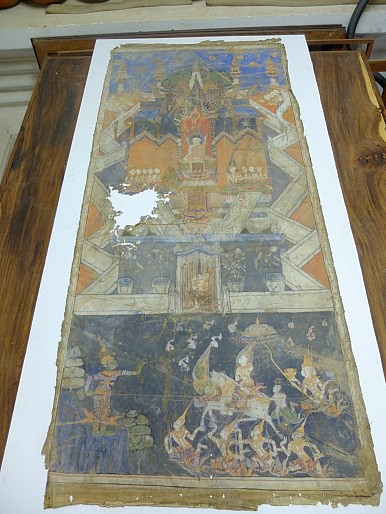 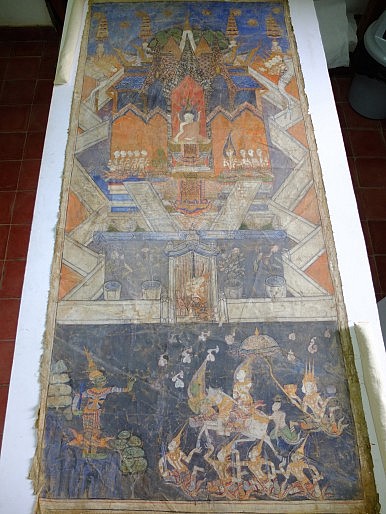 The bloody period of rule by the Khmer Rouge was devastating for all Cambodian arts. In light of this history, how urgent is the need to preserve Cambodia’s painting heritage?

The Khmer Rouge period was devastating for all fields; especially the arts. The preservation of Cambodian paintings is very important for coming generations. These paintings are a unique piece of cultural heritage for the world because of their rarity in the kingdom.

Unfortunately, the conservation and safeguarding of this heritage was not a priority until now. The major art of sculpture, which peaked with the Angkor temples, concentrated the interest of restorers at the expense of painting, a secondary and forsaken art in Cambodia. Many historians such as Vittorio Roveda, Jacqueline and Guy Nafilyan, and Dominique and Danielle Gueret have raised the alarm about the urgency of the situation.

Cambodian painting is now in danger and the state of conservation of many pieces is preoccupying. These masterpieces of Khmer culture have been neglected for too long. It is now time to put them in the spotlight. This is really a work of collective memory.

Can you describe a few paintings you have already preserved or that you plan to preserve in the future?

I am currently working on four large canvases. Due to their bad condition, they have never been exhibited and are being stored in the museum. They depict the Reamker history – the Khmer version of the Indian Ramayana – in which Prince Rama and Princess Sita are seen in some pretty intense scenes.

These religious works of art are the finest collection of Cambodian canvases in the world. We acknowledge the virtuosity of the artists at that time through the quality of the drawing, the colors used and the intensity of the scenes represented. They present works with an undeniable artistic and historic interest.

I would also like to mention my first two restorations, which depict a view of the Royal Palace and Vat Preak Keov. In fact, these two paintings were painted by a French artist. I am proud and happy to contribute to developing this unrecognized and neglected heritage. 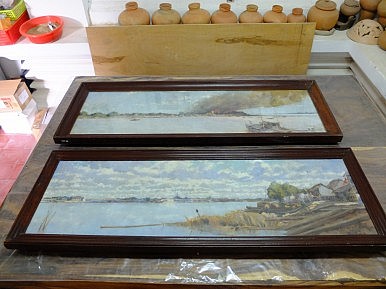 What are some of the unique characteristics of Khmer paintings? Who are a few key Cambodian artists?

There are several generations of major Cambodian artists. The first is that of Vann Nath and Svay Ken, who survived the Khmer Rouge. Van Nath is known for being the “official” painter of the Pol Pot regime, for which he was forced to paint portraits. He painted thereafter every abuse afflicted on inmates.

Meanwhile, Svay Ken became a painter only towards the end of his life at the age of 60. He is known for painting scenes from everyday life. Both are the fathers of modern Cambodian painting.

A second generation born in the early 1970s includes leading figures such as Leang Seckon and Chhim Sothy. Leang Seckon uses various techniques including painting and collage. He draws on a mix of personal experience and popular culture.

Chhim Sothy is a more traditional painter. He likes to represent religious scenes in a personal manner by using a unique color palette, for example. He is known for portraying his sometimes abstract subjects in a strong and balanced style.

A third generation of artists was trained in the West, particularly in France. These artists include Sera and Em Riem. Sera [who was born in Cambodia and later migrated to France] is famous for his comics but also for his sculptures and paintings. His paintings, which are often very large, abstractly evoke his attachment to its roots. The lines in his work, the violence of some of his brush strokes and the colors he uses, translate his personal history.

Em Riem [who was also born in Cambodia, but studied in France] is a complete artist who paints, designs and works in fashion. He sails between abstract works with violent strokes to realistic works with precise lines. His series of paintings of the S21 prisoners painted on burlap is a work of uncanny realism.

The arts and culture of Phnom Penh seems to be taking off. The recent Grammy nomination for the blues band Krom is a prime example. Within the visual arts, are there fresh developments taking place in Phnom Penh today?

Indeed, Phnom Penh is a city that is thriving artistically. New artists are emerging in all fields, especially in music and painting. Very recently many artists from or influenced by street art have stood out, including the talented Ranon Phal.

Phal was born in Battambang in 1991 and studied in Italy at the prestigious Academy of Fine Arts of Brera in Milan. He recently exhibited for the first time in Phnom Penh. The show included his drawings of iconic buildings around the city, done with an extraordinary realism, precision and delicacy of line. He is an artist whose name we won’t forget.

The frontwoman of the Cambodian Space Project, who died in a fatal car crash Tuesday morning, breathed life into a music scene devastated by three decades of war.

Cultural treasures stolen from conflict zones continue to pop up for sale in the United States and elsewhere.

Forty years after being decimated by the Khmer Rouge, the local film industry is making a stir on the international stage.