The government in Beijing claims that China is the long-suffering victim of Western powers, Japan, and other countries. In this narrative, China’s rulers bear hardly any faults. Without any sense of irony, the People’s Republic of China (PRC) repeats its Orwellian twist that China is the “victim” in the South China Sea, though it is the strongest claimant and bullies others to submit to China’s control of areas by using militarized, environmentally-damaging claims to fragile reefs, rocks, islands, and maritime areas within an egregious “nine dash line.” Cries in China that it is the “main victim” became shrill before the Permanent Court of Arbitration (PCA) at The Hague ruled on July 12 in favor of the Philippines against the PRC over maritime claims (not sovereignty) in that sea. Manila sought the peaceful resolution of disputes under the United Nations Convention on the Law of the Sea; under the Chinese narrative this was a grave injustice.

Instead of stressing principles for a rules-based international order, Beijing repeats its Sino-centric script, which can be pervasive and insidious even outside geopolitics. During the Olympic Games in Rio this summer, some in China played the “victim” game by blaming allegedly anti-China foreign judges for the results when China won less than a gold medal.

The PRC propaganda machine manipulates messages by citing a so-called “century of humiliation.” In a self-serving story supposedly speaking for the people, the PRC’s English-language mouth-piece, China Daily, used this convenient definition this past August: “For many Chinese, the ‘century of humiliation’ started with the First Opium War (1840-1842) and lasted until 1949 when the People’s Republic of China was founded.” Outside of China, news reports and commentators also have cited China’s characterization of entitlement and victimization.

A historically-grounded narrative is needed to counter China’s charges, which have real implications for American and other national policies. The PRC plays the “victim” card to its advantage, seeking to compel compliance by putting others on the defensive, to undercut American leadership, to deflect blame, to incite others to regurgitate its case, to indoctrinate internal opinion to support the regime, to stoke “nationalism” for leverage, and to arm psychological warfare that positions Beijing as “just.”

For example, though China has perpetrated cyber-enabled economic theft (involving a military complicit in cyber attacks) against U.S. businesses and government agencies, China extracted the familiar “victimhood” refrain from the U.S. side. In Beijing in 2012, Secretary of State Hillary Clinton said that “both the United States and China are victims of cyber attacks.” By her side, PRC Foreign Minister Yang Jiechi recited in parallel, “China is also a victim of cyber attacks.”

Before the PCA’s ruling in July, one PRC diplomatic offensive blamed tensions in the South China Sea on other Asian-Pacific nations and the U.S. strategic “rebalance” for “targeting China” while complaining that “China suffered the humiliation of foreign invasion and aggression” for over a century. Another high-profile opinion insisted that the PRC was not the “wrong-doer or trouble-maker, but rather a victim.”

In fact, in a fuller history of more than 100 years, the United States has supported reforms in China for progressive government, liberalization, and education for generations of people, as well as integration of China into the international community (even for the regime of the Communist Party of China). As the chairman of the Senate Armed Services Committee, Senator John McCain, recently pointed out: “No nation has benefited more from the rules-based order than China. In just a single generation, China has become an economic superpower and a major player in international affairs. And no nation has been a greater advocate for China’s success than the United States of America.”

While there were problems, the United States has played positive, progressive roles in modern China’s development as a more confident, cosmopolitan country. Exceptionally, U.S. policy has contributed at least five major efforts.

First, the United States declared an “open door policy” in China in the late 1800s. At the time, the Qing dynasty rulers from Manchuria controlled China. British, French, Japanese, German, and Russian forces gained influence over different parts of China. As Jonathan Spence, a professor of History at Yale University, wrote in The Search for Modern China, “Attempts by the United States to declare an ‘open door’ policy for China, under the terms of which all countries would agree not to deny others access to their spheres of influence, may, through some moral effect, have slowed the slicing up of China, but there were no sanctions to enforce such a policy.”

Second, the United States extended educational scholarships to help China. In 1899-1900, the Boxers United in Righteousness destroyed or stole property from Chinese Christians. The Boxers also killed converts to Christianity, and French, Belgian, English, and German people. Western powers and Japan sent troops to Beijing to protect their citizens and suppress the Boxers, who had gained the support of the Qing empress dowager. In the aftermath of the Boxer Uprising, the Qing rulers agreed to a peace treaty with foreign powers that included paying an indemnity for damages to foreign life and property.

Instead of simply pocketing the funds, the United States decided in 1908 to remit much of the money due from China’s indemnity and apply the balance of the amount to scholarships to educate students at American universities. Spence explained that “many American politicians believed their country had a ‘special relationship’ with China, based on what they considered their own comparative altruism in the imperialist scrambles of the later nineteenth century, especially as represented by their attempts to modify international behavior through the open-door policy.”

Indeed, this author’s grandfather had an older brother who benefited from such a scholarship. In the 1910s, he traveled from Hong Kong to study as a member of the Class of 1920 at Ohio State University, joined its Cosmopolitan and Chinese Students’ Clubs, and enjoyed playing football. 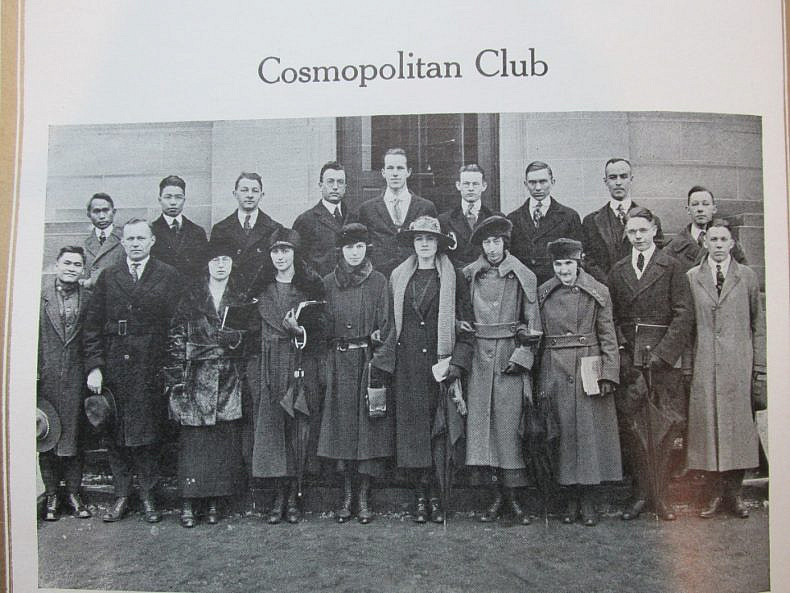 Third, the United States supported the establishment of a new Republic of China (ROC). Attributed to events that started on October 10, 1911, a revolution overthrew the Qing Dynasty. One revolutionary leader was the “Father of Modern China,” Dr. Sun Yat-sen, who first studied in Hawaii in the late 1800s at Iolani and Punahou Schools, the latter of which is President Barack Obama’s alma mater. In May 1913, the American minister in Beijing met with ROC President Yuan Shikai. President Woodrow Wilson also sent a telegram, dated May 2, 1913, to President Yuan. Thus, the United States became the first major power to extend diplomatic recognition to the ROC.

(With a separate history, Taiwan, or Formosa, had its own status after the Qing Empire ceded the island to Japan under the Treaty of Shimonoseki of 1895. Taiwan’s status as Japan’s colony ended in 1945. The ROC government retreated to Taiwan in 1949 during a war against China’s Communists.)

Fourth, the United States and the ROC, together with other countries, fought as allies in World War II.  Even before the United States entered the war after Japan’s attack on Pearl Harbor on December 7, 1941, President Franklin Roosevelt agreed to aid China’s defense against Japan. The president allowed an American military adviser who retired from the U.S. Army Air Corps, Claire Lee Chennault, to lead combat pilots to fight and train fighter pilots in China. The American pilots earned the famous moniker “Flying Tigers.” Some of these Flying Tigers flew dangerous routes over the high Himalayan mountains, called flying the “Hump,” in the China-Burma-India (CBI) theater in order to supply China’s forces cut off from land-based routes. Many U.S. personnel lost their lives trying to fly over the Hump. In 1994, a U.S. Army team recovered partial remains of five crewmembers of the 14th Air Force whose plane crashed high in a glacier and was covered by ice for decades until Tibetan hunters found the wreckage. Given the U.S.-ROC cooperation during WWII, some officials in the ROC (Taiwan) believe that its military should be rightfully represented at the commemoration of the 75th anniversary of the attack on Pearl Harbor this December in Hawaii.

Fifth, in the 1970s, the United States implemented a policy for the “opening of China.” In 1967, Richard Nixon had argued in Foreign Affairs that “we cannot afford to leave China forever outside the family of nations, there to nurture its fantasies, cherish its hates, and threaten its neighbors.” Even before the normalization of the U.S. diplomatic relationship with the regime in Beijing, Nixon agreed to the first U.S.-PRC Joint Communique (also called the Shanghai Communique). The United States has sustained a unique interest in a peaceful resolution of the dispute in the Taiwan Strait, including support for Taiwan as a “beacon of democracy.” U.S. policy has been grounded for decades in five principal statements: the Shanghai Communique of 1972, Normalization Communique of 1979, Taiwan Relations Act (TRA) (P.L. 96-8) of 1979, Six Assurances to Taipei of 1982, and August 17 Communique of 1982.

PRC propaganda relies on Orwellian labels, like “Great Leap Forward” and “China’s Dream.” However, the American narrative of its contributions to China’s modernization trumps the PRC’s “victim” card in its psychological warfare. As the homeland of the ROC, Taiwan also plays a role in an informed counter-narrative. The world will be reminded of this on the ROC (Taiwan)’s “Double Ten” national day on October 10, a date still invoking the revolution that resulted in a republic in China 105 years ago.

Shirley Kan is a retired Specialist in Asian Security Affairs who worked for the U.S. Congress at the non-partisan Congressional Research Service (CRS) and in other capacities in the U.S. Government.  This commentary is her own personal analysis.

Back to Diplomacy? The Bumpy Road to Sino-American Détente

The tense years before China-U.S. normalization hold lessons about the value of backdoor diplomatic channels.

The British Clerk Who Tried to Spark a Chinese Revolution

The life and confessions of Charles Welsh Mason.

Following the clash along their disputed border in December, there's little reason for optimism in China-India ties for the new year.

China-Saudi Arabia relations are both deeper and more limited than recent coverage suggests.