Standing under a torrent of ice-cold water spilling over a rocky cliff in the mountains outside Tokyo, a man in his early 40s clasps his hands together. Clad in nothing more than a white loin cloth, he chants a mantra for more than half a minute, frigid water cascading over him. His peers, dressed in white robes, stand nearby and watch on. They cheer when he completes the ceremony and mentally prepare themselves for their own turn under the falling water.

Meet the Yamabushi (“one who prostrates upon mountains”), devotees of a mystical tradition with a unique place in Japanese spirituality. They are pursuing enlightenment through communion with the natural world and the supernatural forces running through it. At its core, they follow Shugendo, a syncretic system of belief that essentially means “the way of testing and training,” Alena Eckelmann, a Yamabushi practitioner from Germany, told The Diplomat.

“It seems to be a way of ‘personal development in nature,’” she adds. “Sometimes this process is called ‘experimental awakening.’ Experimental because you are not just reading about Shugendo in books or sitting in a temple. You are out in nature, in the mountains and experiencing yourself and your environment with all senses.”

This desire to meet nature with all of one’s senses may appeal to weary city slickers today, but the Yamabushi tradition stretches back to the sixth century CE. During that time, ascetics wandering in the mountains began to blend elements of Shinto, esoteric Buddhism and Taoism, formulating what we know as Shugendo. A colorful cast of characters emerged in this milieu, from lay practitioners and hermits to wandering holy men, exorcists and healers. Most refrained from marriage in the early days, but gradually the Yamabushi community diversified into various sects and some began to raise families according to their chosen tradition.

Yamabushi can generally be divided into Buddhist-based schools in the Kansai region and Shinto varieties in Tohoku, Eckelmann explained. “For the former, the center is Yoshino Mountain, Kimpusenji Temple. For the latter, the center is Dewa Sanzan, Haguro-san Shrine.”

From the 12th century to the Meiji restoration in 1868, Shugendo was a major spiritual movement in Japan. One study found that more than 90 percent of village shrines in the northern region of Honshu were served by priests with Yamabushi ties during that period. 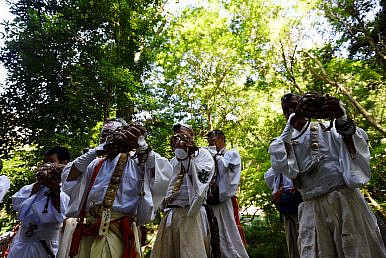 Today is another matter. “For most Japanese, Shugendo is as strange as it as for foreigners,” said Eckelmann, who is from Germany. “The average Japanese sees Shugenja (followers of Shugendo) as part of traditional culture and usually only at temple festivals. They don’t understand anything about Shugendo.” Far from being full-time mendicants, Eckelmann said that most Yamabushi today “are regular people who have integrated Shugendo practice into their family and work life. They have regular jobs at companies, public offices or are self-employed. Many have families.”

“I see mainly middle aged and older men,” Eckelmann continued. “There are not many young people. It seems that people find Shugendo when they look for some deeper meaning in life which tends to happen in one’s 40s.”

Although it was traditionally reserved for men, she added, “Recently I see more women. This is probably because the two big centers for Shugendo, Kimpusenji in Yoshino and Dewa Sanzan, have opened up and allow women practitioners.” In addition to women, she said that younger foreigners – mainly academics in their 30s – have also began to show more interest in Shugendo over the past decade.

Eckelmann’s own journey to Shugendo began after she wrote a story about Yamabushi for the now defunct Tokyo Journal in 2008, piquing her curiosity. She was living in Tokyo at that time, but decided to move to the Kii Peninsula in the summer of 2011 to undertake more serious training.

“Soon after moving I did 21 days of training in the mountains,” she said. “Since then I have also fasted for up to 10 days, undergone waterfall purification, attended many fire ceremonies, learned Buddhist mantras and mudras.” She was ordained in May of this year at Sakuramotobou, a Shugendo temple in the Kimpusenji tradition, based on Mt. Yoshino in Nara Prefecture. “Now that I am ordained, I will be able to learn more. Many of the teachings are still secret and are only passed on from master to student.” 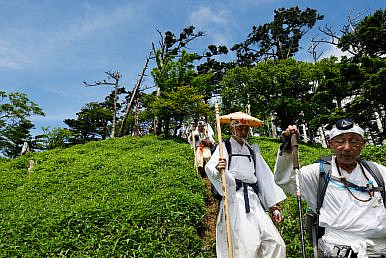 Whether foreign, Japanese, male or female, before Yamabushi head for the mountains, they gear up. Their iconic uniform includes straw sandles, Buddhist rosary beads, robes of various hues (white, saffron, tan, blue, sometimes checkered), sometimes a conical hat made of woven wood slats, and other times a black pillbox cap that serves as both protection and a drinking cup. Some also wield conch-shell trumpets. And almost all of them carry walking sticks to ensure balance in the rugged terrain.

This last item is particularly important. Regardless of sect, one practice shared by all Yamabushi is pilgrimage. “A must-do activity for a Yamabushi is to walk mountain trails,” Eckelmann said. “Serious practitioners should walk one of these trails at least once a year. In the old days it would have been more often but nowadays people do not get holidays to walk mountain trails that easily.”

Indeed, only a small number of yamabushi today are fully ordained as monks, who lead rituals, such as waterfall purifications and saito goma (outdoor fire ceremony), Eckelmann explained. But by and large, Shugenja “only have weekends and long holidays. This is when most of the activities now take place.”

On any given weekend, small groups of Yamabushi can be seen plodding up steep trails select areas of Japan. As they ascend, they often chant in unison: “Sange, sange, rokkon shojo.” (“I repent, I repent, purify my sixth sense.”) The intensity of the journey reinforces the conviction of the words. And the physical test of endurance is critical to their practice.

“This walking is not regular hiking but is a kind of purification, meditation and worship of certain deities,” Eckelmann said. It is also meant to “test ones strength of body and mind and [encourages] cooperating well as a team. Most of these walks are nowadays organized by temples or Yamabushi groups and can include any number of people – 5, 15, 30.”

The list of ordeals that Yamabushi endure are many. They also battle sleep deprivation, walk on hot coals and (as described above) subject themselves to immersion in icy mountain water. During periods of ascetic discipline, they also adhere to a strict diet consisting almost entirely of mountain vegetables.

While it may not make for a relaxing weekend, some temples now hold occasional Shugendo “tasters” for the curious. The reasons to desire experiencing something so arduous are as numerous as the weary weekday warriors who want to explore Shugendo. Banri Tanaka, an Osaka-based photographer, discovered his interest almost by accident.

“Most people today just want to go to Universal Studios Japan or Disneyland,” Tanaka said. Before he became a Shugenja, Tanaka admitted that he “didn’t really climb mountains or do anything that tough. I preferred to drink beer at home.”

“My first time to approach Mt. Omine (a sacred Yamabushi peak in Nara Prefecture) was 13 years ago,” he continued. “I was drunk during the hike. But I felt some power, some energy coming from nature that I hadn’t felt in my ordinary urban life. I was surprised to discover that Yamabushi still existed. The rituals and ceremonies I attended were so interesting. I just kept going to the mountain, and eventually I wanted to learn to pray in the proper way.”

Tanaka’s down-to-earth account has the distinct ring of truth. Many have a similar experience of gradually awakening to the deeper meaning of the Yamabushi path. After all, it is a journey.

“It is often said that Shugendo’s goal is to get supernatural powers,” Eckelmann said. “This is probably the highest level of achievement. But it is difficult to obtain and requires many years of continuous, serious training. I am not sure whether I have met practitioners [with such powers] or witnessed any such displays of power yet.”

“What I can see is that a certain power and experience – for the body, mind and soul – is the outcome of ascetic training,” she continued. “Underlying physical strength that comes from long, difficult walks in the mountains. A relaxed and sharp mind that comes from being in nature, mediation and releasing worldly concerns. From these there comes some deeper understanding of man’s position in nature and in the cosmos.”

As fashion and social context evolves, could attitudes towards tattoos change in the country?

By Bradley Jardine and Sakshi Rai

In 1967, Choje Akong Rinpoche helped found the first Tibetan temple in the West.

Think of Star Wars and Star Trek merged into one franchise to visualize the impact of Gundam on Japanese pop culture.

A bar manager and two colleagues face two years in prison for a photoshopped image.