Finally, Singaporeans have it straight from the horse’s mouth.

Their Law and Home Affairs Minister K. Shanmugam has inadvertently scored an own goal while trying to defend the country’s controversial, racially based electoral system – the 28-year-old Group Representation Constituency (GRC) scheme – concocted by the ruling People’s Action Party (PAP).

On October 21, Shanmugam spoke at an Institute of Policy Studies (IPS) forum on proposed changes to Singapore’s elected presidency. He used figures from various surveys to support the PAP government’s case for provisions ensuring minority representation.

Any discussion about race and politics in the city state usually gravitates toward the issue of GRCs. And when the opportunity arose, Shanmugam sprang to the defense of the PAP’s block voting system.

But in his effort to do so, the 57-year-old made an argument that actually provides a perfect rationale for tearing down the GRC scheme. 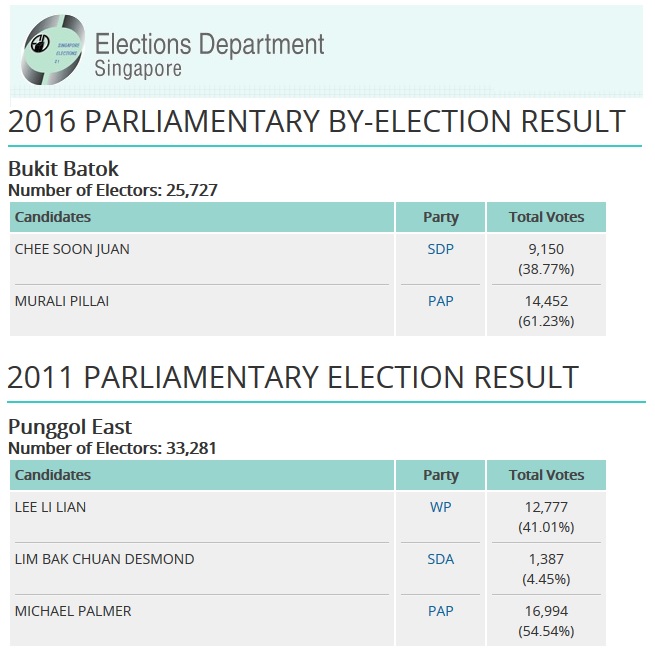 One can rationally deduce from any minority triumph that a candidate’s ethnicity has no significant relevance to the outcome of an electoral contest.

However, when referring to the Bukit Batok by-election, Shanmugam called it “a false comparison” as he tried to convince Ms. Lee and the rest of the forum attendees that Murali Pillai’s win against Chee Soon Juan doesn’t mean race isn’t an issue for voters.

He reasoned that in a Single Member Constituency (SMC) contest, the political party is a “significant factor” due to voters’ party loyalties, stressing “a certain premium” is placed on the contesting party.

Why GRCs Must Be Abolished

Shanmugam is correct in one aspect: In SMCs, a political party does carry a highly substantial weight compared with the candidate representing that party.

But this is precisely why the PAP must abolish GRCs. Because a candidate’s party commands “a certain premium” in an SMC, that premium will nullify the effects of any racial bias that may exist among some voters. This point was also raised in a March 2016 article, which uses empirical data from all of Singapore’s 14 general elections since 1959 (the year the island became a self-governing state) to show that racial bias never had any impact.

Academics and political scientists who research and analyze the island republic’s electoral system and voter behavior also have reached the same conclusion – that race has no impact on the outcome of an electoral contest.

For instance, Dr. Norshahril Saat of the Institute of Southeast Asian Studies in Singapore has published an article showing proof that Singaporeans do not vote along racial lines.

At Canada’s McMaster University, Dr. Netina Tan noted “the legislative representation of ethnic minorities was not severely imbalanced to begin with” in her 2013 paper “Manipulating Electoral Laws in Singapore.” Tan cited a 2012 book and a 2005 academic article to point out that the GRC system’s “critics were unconvinced that Singaporeans were voting along racial lines.”

No wise political leader would implement economic policies without considering the advice of economists or manage national defense issues without the counsel of military experts such as army generals. Likewise, a government must take into account political scientists’ empirical research on electoral systems or processes when making policy decisions affecting those very electoral systems and processes.

But instead of relying on highly relevant, irrefutable findings, Shanmugam turned to a heavily criticized recent survey to support his case.

The survey was jointly conducted by Channel NewsAsia (CNA) and IPS. CNA is owned by one of the two media giants that form Singapore’s mainstream media, which is currently ranked 154th (out of 180 countries) on the World Press Freedom Index, while IPS is an “independent think-tank” that studies and generates public policy ideas in Singapore.

The current IPS director is the PAP government’s chief of communications at the Ministry of Communications and Information and concurrently deputy secretary at the Prime Minister’s Office.

One mind-boggling aspect of the CNA-IPS survey is that its respondents include people who are not even eligible to vote in Singaporean elections.

In spite of concrete evidence to the contrary, Shanmugam insisted that a candidate’s ethnicity “does have an impact” on voting. And, strangely, he saw fit to use an American example to support his argument. How is the United States having had only nine black senators throughout history relevant to voter behavior in Singapore?

Just because it appears that black candidates might have suffered discrimination in a white-majority political system in a distant land doesn’t mean that race could unfairly affect the results of electoral contests in Singapore.

Drawing conclusions from an imaginary link between American voter behavior and that of Singaporeans is perhaps another sign that racialized voting in Singapore is simply a fictitious problem in the Lion City.

Although Shanmugam reminded the IPS forum audience that race is not “the be all and end all,” he repeated his argument that “race can play a factor” and claimed that it “can lead to a situation where minority candidates may be shut out over a long period of time.” This borders on the ludicrous.

Remember this: After more than half a century of general elections in Singapore, there still isn’t a single piece of evidence showing that someone has earned his parliamentary seat because of (or partially due to) his opponent’s ethnicity, even among tightly fought contests. Moreover, before GRCs were implemented in 1988, Singaporean voters had always elected no less than 20 percent minority representation in the House. Therefore, to worry about “a situation where minority candidates may be shut out over a long period of time” is to have an irrational fear of an improbable possibility or extremely unlikely event.

But this is not to say that minority candidates had never lost to ethnic Chinese opponents. In fact, throughout 56 years (1959-2015) of elections, Singapore had seen 28 such cases – an average of two per general election. Shanmugam, however, didn’t mention even one case.

It’s probably because in all of those 28 cases, the voters chose their parliamentary representatives based on political lines or party loyalties, not racial lines. Every one of those 28 victorious candidates was part of the ruling party, and even the staunchest of anti-PAP voters would admit the enormous pulling power of Singapore’s strongest political party.

Before Shanmugam ended his defense of the GRC system, he said in front of the forum attendees: “Let’s not make too much of it.”

Ms. Lee, the member of the audience who raised the issue of racial quotas in Singapore’s elections, had expressed concerns that needless race-based electoral measures might cause Singaporeans to be more “race-conscious.”

But the one who said not to make a mountain out of a molehill was the same person who tried to justify the GRC scheme, a system that is essentially a farcical attempt at combating voters’ racial bias which, at every election, has been proven to have no impact on election results.

It’s puzzling that the PAP government has bent over backwards to create electoral laws to try and prevent an unprecedented and extremely unlikely event from occurring.

In other words, PAP politicians stopped employing a practically foolproof system that would have helped them avoid the very situation they say they’re trying to avoid.

Is logic no longer essential in Singapore’s electoral system?

Policies based not on concrete reasons or empirical evidence but irrational fears will hurt, not help, a country; Singaporeans, regardless of race, deserve better than that.

Watch Shanmugam’s full presentation and his response to audience questions at the IPS forum in this video. The comments discussed in this article are primarily found between 47:14 and 52:24 in the video.

Formerly a broadcast journalist and sports administrator in the Lion City, Michael Y.P. Ang now writes about sport, politics and society in Singapore. For more of his articles, visit michaelangyp.journoportfolio.com.

Singapore: Election Politics Amid the Pandemic

Singaporeans are unhappy with their government's COVID-19 response, but the opposition may be too fractured to present a viable alternative.

The country continues to mull ways to counter a challenge that has been receiving wider international attention over the past few years.

What Lies Ahead for Singapore’s Succession Dynamics?

This year’s iteration of the prime minister’s National Day Rally speech was scrutinized for a sense of the country’s political future.

The Future of Singapore’s Politics in Focus Amid Election Speculation

Developments in the country’s politics have come under greater scrutiny ahead of the next polls.