The immense demand for methamphetamine (ice), ecstasy, and new psychoactive substances among the wealthy urban residents of East Asia and beyond has revitalized organized crime in the region.

The scale of recent drug seizures in underground laboratories in China’s Guangdong province alone is staggering – and it’s jumped by 50 percent in the last year. In January 2015, for instance, 2.2 tonnes of solid and liquid methamphetamine destined for Shanghai were uncovered in the coastal county of Lufeng. In May that year, 1.3 tonnes of ketamine and 2.7 tonnes of its precursors were found in the city of Yangjiang, disguised as black tea bound for Southeast Asia.

Responding to the challenges posed by organized crime groups are a handful of capable law enforcement agencies; a patchwork of cross-border mutual legal assistance agreements; and a fledgling regional security response from ASEAN. These agencies struggle to have an impact on the scale of criminal enterprise in the region. They are also constrained by concerns about sharing intelligence with potentially compromised police, customs, and military services.

In 2013, the United Nations Office of Drugs and Crime (UNODC) estimated that crime groups earned about $90–$100 billion a year from illicit sources. Narcotic production and trafficking in drug precursors were the most lucrative, followed by illegal wildlife and timber trading. UNODC found human trafficking, illegal e-waste disposal, maritime crimes ranging from piracy to illegal fishing, counterfeiting of medicines and “high street” products, and underground gambling were the most damaging crimes.

It’s easy, then, to see why the burden of transnational crime is often borne by the poor people of Southeast Asia. A growing demand for timber and wildlife products puts pressure on cash-strapped communities to collude with criminal groups in extracting and marketing these resources. And the Japanese yakuza and triads or “black societies” in Taiwan, Hong Kong and South Korea also seek opportunities to dump e-waste in under-regulated jurisdictions.

Southeast Asia’s lucrative markets, combined with the availability of and demand for consumer and medicinal products, have proved irresistible to criminal enterprises.

This is illustrated by the fact that cross-border movement of illicit products into and out of Southeast Asia, often via India and China, has intensified in recent years. This is due, in part, to free-trade agreements between ASEAN and these countries, as well as the massive upgrade of the region’s infrastructure and connectivity now under way.

China’s “One Belt, One Road” initiative, the India-Myanmar-Thailand Trilateral Highway and the Trans-Asian Railway are all speeding up change and development in transport and commerce in the region. Yet a 2016 UNODC assessment noted that, despite the existence of “thriving networks of cross-border criminals,” a “fully operational framework on tackling cross-border crime does not exist.”

Organized crime groups in East and Southeast Asia are diverse and often ephemeral. Some, such as the triads of southern China, have survived since the 19th century. Others form and disband in a generation or less.

The defining feature of organised crime is that it offers protection services – the enforcement of contracts – for illicit markets. In circumstances where state-led conflict-resolution is weak, it can provide similar services as legal institutions.

This reflects the impact of the globalization of trade and the increasing wealth of China, India, and the region. Opportunities abound for expanding into industries or locations unhampered by existing protection providers.

Strategic violence still plays a crucial role in enforcing contracts in illicit markets and establishing distribution markets. Hong Kong triads, such as the Sun Yee On, merged with or rented local protection services in China and Southeast Asia as China opened up its economy.

These looser macro-criminal networks are often referred to as “red-black” in Chinese, a euphemism for collaboration between the criminal world and corrupt elements of the state. This occurs at the county level in China or at the sub-state level in the Golden Triangle, as the tri-state confluence of Myanmar, Laos and China is known.

The Triangle is now also known for the mass production of amphetamine-type stimulants, such as ecstasy, built on the older tradition of opium production and heroin refinement. 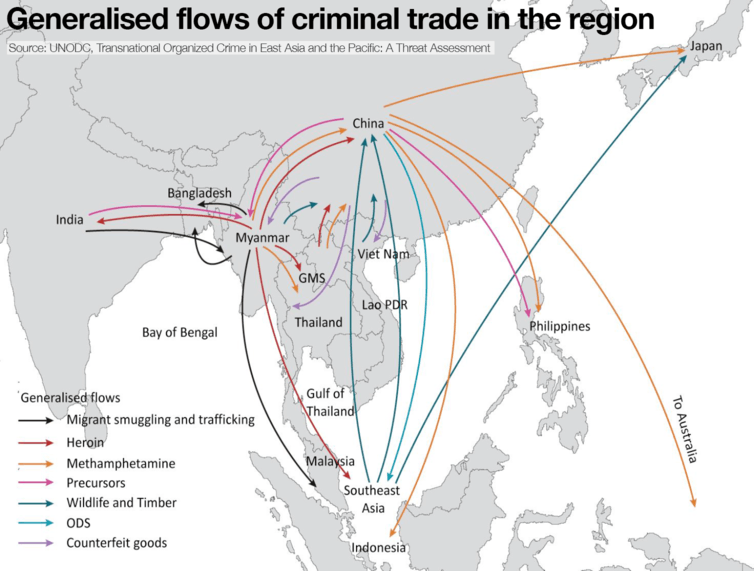 Along with amphetamine-type stimulants, ice pills and heroin are transported from production areas in northeast Myanmar in modest quantities of a kilogram or less — below the prevailing legal threshold for trafficking — to markets in Bangkok, Yangon, or Kunming. This method, known as “ants moving house,” earns the successful smuggler $2,000 per run.

Larger amounts may be diverted via Cambodia for trans-shipment to highly profitable markets such as Australia and Japan, where premium wholesale prices beckon.

The lack of effective action to suppress problems such as illegal drugs, counterfeiting, and wildlife extraction reflects ASEAN’s relatively weak integration with regard to security problems. Until there’s a sense that ASEAN is a community with a shared fate, effective coordination to combat organized crime is likely to be little more than window dressing.

Most Asian governments have given economic development priority over concerns about illicit trade and organized crime. Progress against organized crime will remain ad hoc unless this changes.

Alternative policies that seek to regulate recreational drugs and the pursuit of harm-reduction strategies would help undercut the profits of criminal groups. Policies that reorient consumer choices to undercut the goods and services organized crime provides would also help.

The key to effective suppression of organized crime will be the action of the ASEAN+3 group (the three being China, Japan, and South Korea).

China’s awakening to the high cost of fake and often dangerous products, as well as the perils of using “ice” for the young, should help reduce the scale of organized crime activities in the region. Chinese-led restrictions on the export of precursor chemicals – effective from late 2015 – could be significant if followed by India and ASEAN.

By December 3, Duterte’s “war on drugs” had seen 2,028 drug crime suspects killed during police operations while 3,841 deaths had been attributed to vigilantes. The high risk of homicides involving vigilantism shows the campaign is out of control and corrosive of the independence of courts.

Any hope of reducing the impact of transnational crime will depend on reducing the demand for illicit products as well as enhancing the legitimacy and effectiveness of law enforcement.

This article was originally published on The Conversation. Read the original article.

Brown sugar, Heroin no 4 and Yaba top the narcotics flowing into India from Myanmar

How does North Korea keep fueling its military and other needs?

Mainland Southeast Asia remains a hotspot for illegal drug manufacturing, and Vietnam is emerging as a transit hub.

The illegal drug trade is sabotaging peace in Afghanistan and Myanmar alike.

The scale of Meta's content removals points to the sheer deluge of hate speech and disinformation that is flowing through the country's social media networks.

Tit for Tat: The Fall-out From the US Approach to Politics and Policy in Cambodia

Washington was right to censure Phnom Penh in its latest Trafficking in Persons Report. But the U.S. government risks entangling legitimate criticism with geopolitical tensions.

The comments came a day after an ASEAN joint communique lamented the "lack of progress" in resolving the country's political crisis.

The late president's political legacy offers a blueprint for what the Marcos administration should do – and what it should avoid.