It is Friday in a call center in the Philippines and two workers — we will call them Rick and Mark — discuss going out for a drink. Rick is hesitant, but Mark insists by saying that Mona, another colleague, will also come. Once at  the party, Rick feels insecure about talking to Mona and Mark offers him some drugs to “boost his confidence.” They both use them.

From there, Mona is raped and killed by the two friends. When police surround them days later, Rick surrenders peacefully while Mark, armed with a gun, tries to resist. Five bullets pierce his skull and body.

This is one of the stories portrayed in the comic “Ayun Kay Digong” (“According to Digong”), a  reference to the nickname of the president of the Philippines, Rodrigo Duterte. At the end of the story, Duterte looks at the readers with a stern face and declares, “Drugs are really a plague on society.”

“The campaign against drugs is the fight of every Filipino,” he adds. “Let’s help each other to end this problem.”

Inside the comic’s 16 pages are three stories showing the dangers of drug use. Two of them end with the fatal shooting of the drug peddlers or users (who are armed), and one ends with the rehabilitation of the addict. 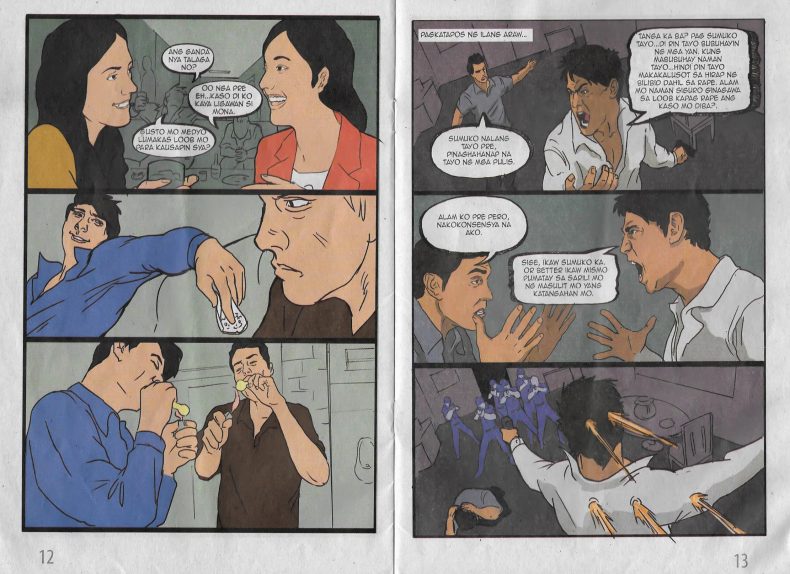 Page 12 and 13 of the comic book tell the story of two coworkers who take drugs to “boost confidence.” Photo by Eduard Merigo.

Duterte’s war on drugs has caused 6,199 deaths since he first took office on June 30, according to the latest count by the Philippines National Police on December 25. Of those deaths, 4,049 were extrajudicial killings. Hundreds of thousands surrendered and dozens of thousands were arrested, packing the already overpopulated Filipino prisons. Duterte’s extreme stance against drugs, the flagship of his mandate, and against crimes and corruption resulted in Time magazine comparing him with Marvel’s vigilante character “The Punisher” in 2002. Back then he was mayor of the southern city of Davao.

In Davao, his iron fist and earthy style granted him undisputed popularity through 22 years in office. However, his links to the death squads of Davao, which reports claim have killed more than 1,400 suspected criminals since the late 1990s, prompted the first accusations of human rights violations. He has both denied and admitted to having links to death squads, and to killing criminals personally. Duterte has repeatedly urged people to take matters into their own hands and kill drug users and pushers, while at the same time condemning extrajudicial killings.

Although widely criticized by the UN, the United States, the European Union, and international human rights organizations, Duterte’s stance against corruption and drugs enjoys strong support at home. The comic is one of the products of this popularity. Margot Delos Santos, program director at the company behind it, Strawberry Field Productions, says creating the comics was their initiative. “It was a sample that we made and then we sent it to them [Duterte’s office], and they liked the idea. We like to support the advocacy of our president; drugs are something that will destroy our nation,” says Delos Santos.

According to the secretary of the Presidential Communications Office, Martin Andanar, the comic “didn’t cost the Government a single centavo.”

The comic has been distributed since October in the Philippines and in some Filipino communities abroad, particularly in countries Duterte has visited. The first time was in Brunei in mid-October, then China, and the most recent was  Cambodia, where Andanar says “they ran out of comics.” The sample edition, with the subtitle “Eradicate: Dangerous Drugs,” is intended to be  the first in a series about drug abuse in the Philippines. It is labelled an “infocomic” because its contents are inspired by real events. “It is about real life situations, so it is really easy to come up with a scenario, because this is what you see in the news. If you are in the Philippines you will see a lot of these things happening,” explains Delos Santos.

Duterte claims that there are 3 or 4 million drug addicts in the Philippines, but the Dangerous Drugs Board estimated in a survey published in October that there are 1.8 million users in a population of 100 million. Shabu (methamphetamine) is the most used drug, with 4 out of 5 drug users who seek treatment taking it, according to 2014 data from the Drug Abuse Information Network for Asia and the Pacific.

Criminality has been a major national concern for Filipinos throughout 2015 and 2016, according to Pulse Asia surveys, but not the first one. From July to November, data from the Philippine National Police show that the overall crime rate (murder, homicide, physical injury and rape, and crimes against property) has declined from 81,064 cases to 55,391. On the other hand, murder has increased from 3,950 to 5,970 in the same period.

In a recent survey of Social Weather Stations last week, 78 percent of the Filipinos interviewed were worried about becoming victims of extrajudicial killings and 94 percent considered it important to capture drug suspects alive. The same poll, however, showed that 85 percent of respondents were satisfied with the administration’s campaign against drugs.

In Cambodia, the last place where the comic was distributed, it is hard to find a Filipino who doesn’t support Duterte. On the eve of his visit, six Filipinos re-enacted the killing of a drug dealer in front of Phnom Penh’s Royal Palace in a protest that lasted a few minutes. That same day, the president met with more than a thousand compatriots that received him like a rock star.

At a restaurant in the capital, some Filipinos comment on Duterte’s mandate so far, which they think is unfairly represented in the international media. “He is the only president who has been in the position, who responded on time, who was able to really put into action what he has promised before the elections so, in that perspective, he is respected,” says English teacher Cai Delos Santos. “For Duterte, when he says stop you should stop, or otherwise he will do something that will make you stop,” adds Delos Santos, who attended the gathering with the president during his visit to Cambodia.

“Mostly the crimes are because of the drugs so this one [the comic] is just informing people that if we use the drugs we can commit a lot of crimes,” says her friend Hanna Mendoza, who is also an English teacher.

Last week, the UN High Commissioner for Human Rights Zeid Ra’ad Al Hussein asked the Filipino authorities to investigate Duterte after he publicly admitted to killing  three suspected criminals when he was  mayor of Davao. Al Hussein said in a statement that Duterte’s “repeated calls for the police, military and the general public to engage in a ‘war on drugs’, bringing people in ‘dead or alive’, has fostered an environment of alarming impunity and violence.”

The president responded by calling Al Hussein an idiot and a son of a bitch, enlarging the list of international personalities he has insulted, which already includes Barack Obama and Pope Francis.

Andanar thinks that the policies of Duterte need further explanation abroad. “The local people, the domestic market understands the war on drugs, but unfortunately the international community, the international media, needs more education when it comes to the war against illegal drugs. They need more explanation,” says the secretary of the Presidential Communications Office.

In any case, the comic books are just the beginning. There will be new communication tools for the domestic public that will complement the national media, which is also undergoing some changes. The Government website is experiencing “a major face lift,” says Andanar. The office already has a hotline and a tabloid on its fourth edition called “Mula sa Masa, Para sa Masa: Masa Kasangga sa Pagbabago” (From the People to the People: People Partner for Change). In January, they will launch a Duterte app and the president has announced plans to host a television and a radio program, following a format he already used as mayor of the city in Davao.

Ricardo Perez-Solero is a freelance journalist based in Southeast Asia. (This piece was originally published under a pseudonym.)

The Philippines' president has little regard for human rights as he cracks down on drugs.

The promise came a week after the International Criminal Court announced a probe into the violent anti-drug campaign.

Duterte Vs the International Criminal Court

Can Philippine President Rodrigo Duterte be indicted for "crimes against humanity”? And if so, can he be brought to justice?

Duterte’s Year of Sound and Fury

One year after his inauguration, how is the Philippine president faring?