“If there is money, there is water. No money, no water!” This was the reply from a group of slum-dwellers when they were asked about the water supply at their slum.

This is the current reality in Medical slum in Gazipur city, Bangladesh, where water is an expensive product. Medical slum is situated just beside the Tongi Medical Hospital, Tongi, Gazipur. But water scarcity is also the norm in thousands of slums in developing countries. Due to population growth, rapid urbanization, excessive withdrawal of water, and the added impacts of climate change, these cities face growing pressures on groundwater resources. In a capitalistic society where everything is for sale, water is no different.

About 10 years ago, a tube-well was established at this slum by an NGO. But now it is dysfunctional due to a lowering of the groundwater table close to or below the bottom of the tube-well. A study done in 2011 found that, “Over the past seven years, the water table of Gazipur district has dropped from four meters below MSL to 16 meters.” Five years later, the situation is even worse than that.

Gazipur is a major industrial city, where the number of factories is increasing day by day. Gazipur is also home to various agricultural research centers. Here, the striking depletion is caused by the excessive withdrawal of groundwater to meet the needs of about 3 million city residents and the large number of industries, combined with inadequate recharging of the underground vacuum it creates. 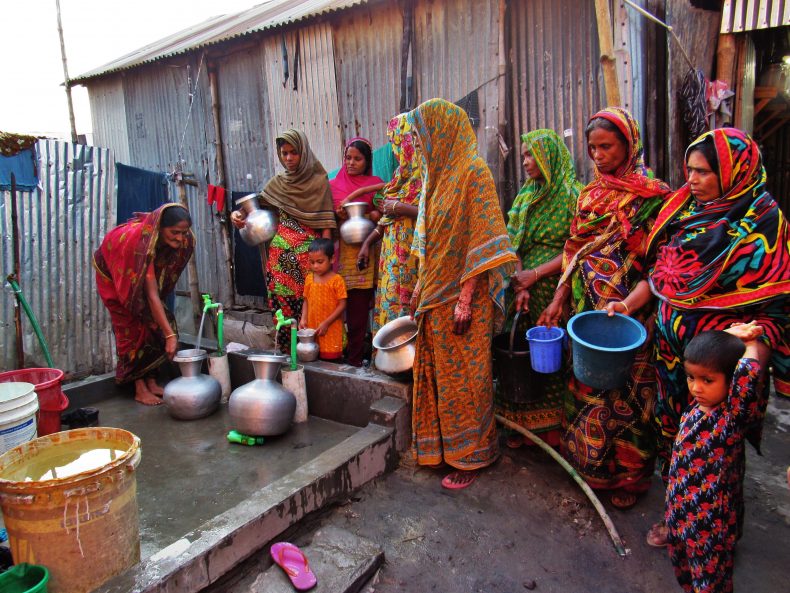 The people of Tongi Medical slum pay a big amount of money for water consumption. Once upon a time, two people established two submersible pumps. Since then they have been selling water in this slum. People are helpless because there is no municipal water connection and no other source of pure water. So they have no option but to purchasing water at a higher price. Here one pitcher of water (approximately 10 liters) costs 1 taka. People pay 10 takas each time they take a bath, and 20-30 takas for washing clothes. There are some who pay on a monthly basis as well. In that case, depending on the family size, water rent can vary from 300 to 700 takas per month. People who pay monthly have a water line in their house.

It is the duty of government, not private entrepreneurs, to ensure a water connection. Why this community is deprived of this utility service? What is the main obstacle?

Some of the slum dwellers explained that once they had tried to set up a water connection from government. They were allotted a submersible pump from City Corporation but the water traders of this community interrupted and started lobbying high-ranking government officials to take back this utility service. In the end, City Corporation had to take back the pump.  In other words, greed for profit prevented a government water supply. If these poor people can get a water connection from City Corporation, then the local water selling business will be destroyed. So they continue their lobbying and never consider the benefits of these poor slum-dwellers.

The same problem exists in the other slums too. The water selling business is very common in slum areas. For the sake of profit, some influential people are creating obstacle to other people’s access to free or low-cost utility services. This is a big challenge for any NGO as well. Whoever tries to extend their support in order to solve the water crisis can expect to be threatened.

During the rainy season, the slum becomes flooded but safe drinking water remains scarce. Rainwater harvesting could be an alternative option for a sustainable water supply.  However the necessary technology for rainwater harvesting is quite unknown to the slum dwellers. The question is whether the community is prepared for the technology or not. Other options for climate change adaptation include the establishment of submersible pumps or deep tube-wells. Financial and administrative support is needed for the establishment of submersible pumps. The community-owned submersible pumps will reduce the expense of slum dwellers and enhance their resilience to climate change.

Government action will be difficult to arrange. Having no legal papers for accommodation, slum dwellers are also deprived of the government’s utility facilities such as electricity, water, gas etc. Though these slums have no legal registration, slum dwellers are registered voters of respective areas. Ward councilors (local government officials) used to visit slums to seek votes before elections, but when the questions of citizen services arise, they often refuse to take any responsibility to provide these slums with any utility facilities, blaming resident for having no legal registration.

However, some NGOs are working to establish safe water supply systems in these slums. In Gazipur City, CARE Bangladesh and VERC installed a few submersible pumps and water tanks in the slums to ensure a safe water supply system under a project named “Building Resilience of the Urban Poor (BRUP),” which was funded by the C&A Foundation.

By Farwa Aamer and Jace White

To Fend Off China, India Must Galvanize Ties With Bangladesh

India must make every effort to capitalize on her extant goodwill in Bangladesh before it's too late.

Issues with water resource management in Bangladesh have some very broad repercussions.

Why Is Household Debt in Thailand So High?

COVID-19 exacerbated the situation, but high levels of household debt are a structural feature of the Thai economy that predates the pandemic.

China's live-fire drills did not spark much fear in Taiwan, where frequent Chinese military activities have long become a reality.