Kabul, the ancient city and capital of Afghanistan, has witnessed many ups and downs. The center of power struggles throughout its history, Kabul was prized by conquerors or invaders due to its geostrategic importance. From Alexander the Great through Mughal King Babur, Kabul was ruled by many different dynasties.

The city’s golden age came from 1930-70, when Kabul became a hotspot for tourists. Its cinema halls were full, while parks, universities, and picnic places were always lively. Kabul at that time was among the most beautiful cities in the world, having clean air free from pollution. Its location — surrounded by beautiful mountains, which would give the city a whitish look, and with a river flowing in its center — further beautified the city. Kabul attracted tourists from different parts of the world, who would enjoy the unique Afghan culture, hospitality, and multi-ethnicity of the city. Kabulis were religiously, culturally, and socially tolerant enough for the city to host different ethnicities and religions; foreigners also felt very comfortable.

During the period of communist rule (1978-89), the regime’s habit of killing and arresting its opponents, as well as its internal disputes, spread a layer of fear among the people. Still, Kabul maintained its beautiful look. After the outbreak of civil war in 1990, different groups of mujahideen started fighting one another. The city was ruled by different militia groups and it witnessed the worst kind of human rights abuses. During that time of fear and terror, many Kabulis sold their property and left the city, migrating Pakistan and Iran or even Europe or America.

Then, in 1996, the city was captured by the Taliban, who ruled with their own strict understanding of Islam. The new leaders banned music, television and girls’ education. During that time, Kabul was not only isolated from the rest of the world but was completely changed and transformed into a ghost town.

Since the fall of the Taliban in 2001, the city has simultaneously worn two faces: it is a city of life and hope but at the same time it holds fear and terror too. 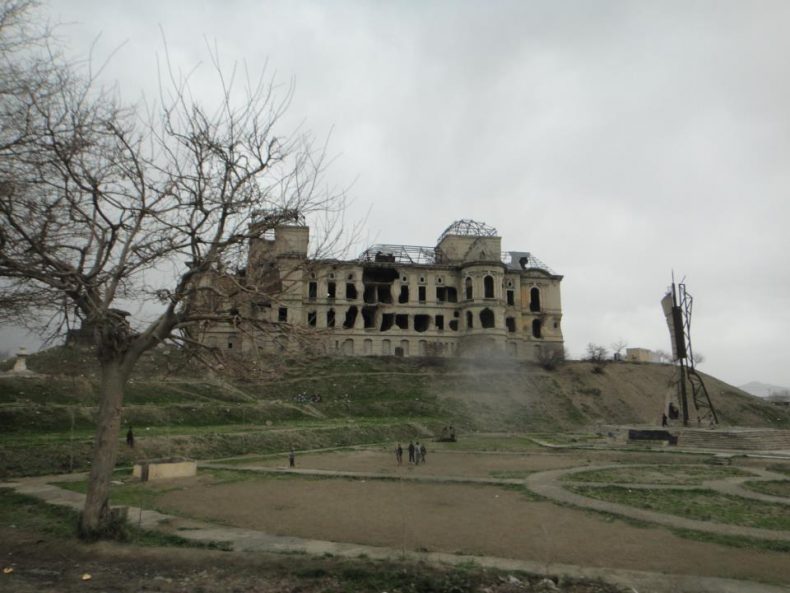 In the year 2016, as usual, Kabul witnessed a number of security incidents. The list is quiet long, with hundreds killed. Children, adults, women — everybody is potential victim of violence and no place, not even a mosque, a school, or a university, is safe. Moreover, the general law and order situation has been also deteriorating. Kidnapping, robbery, and theft have become common in the city.

But the problems that Kabul faces are not only restricted to security and law and order problems. Unemployment is high and many Kabulis are seeking refuge in Europe for a better life. Still, the population is growing. The city, which can hardly accommodate 1 million people, is currently home to more than 3 million.

Alongside growing air pollution, the improper sewage system adds to water pollution. The potholed roads and streets of the city fill with water when it rains because there is no proper system of water drainage. Accessing clean water is getting difficult as every household has dug wells inside their houses, without any proper consultation from the government. This has resulted in reduced water levels and this problem, if not addressed, could lead to a serious water crisis.

In winter not only are frequent blackouts a headache, but the air becomes still more polluted as residents burn wood and coal to keep their houses warm.  The traffic of the city is so congested that it takes hours to reach any part of the city. Medical facilities are not enough to take care of the inhabitants of the city and therefore people mostly go to Pakistan or India for medical treatment. The growing radicalization of youths is a worrisome trend, as is the large number of drug addicts — a serious problem that the state cannot address because of the powerful drug mafia.

All these factors make up the horrible face of Kabul, which is usually presented in the media. But most people watching Kabul from a distance are not aware of its brighter face, which is full of life, hope and happiness. In the morning, like any other city in the world, boys and girls go to schools and universities, and adults go to work. During weekends or free time, youngsters visit their relatives and friends. They play sports like soccer and cricket; bowling clubs and swimming pools are also becoming popular among teenagers. People also visit Baghe Bala, Babur Garden, Kargha Lake, and Paghman hillside with their families or friends. When Nowruz comes, Kabulis celebrate it with great enthusiasm.

New restaurants, shopping malls, and other recreational places are opening across Kabul. In particular, a chain of wedding halls has spread all over the city, identifiable by the colorful lights and people gathered outside. Kabulis do not miss any opportunity to be entertained.

Human rights are improving as well. Women are free to study, work, and compete with males in any sphere of life. There is freedom of speech and different television and radio channels and newspapers are actively working in a vibrant media sphere.

The new generation is very active both in education and sports, and their achievements in both areas are vital, as about 60 percent of the country’s population is below 25 years old. Young Afghans are provided with opportunities to receive higher education abroad before returning with more knowledge and enhanced skills. These educated and skilled youths will take on important positions in the near future. 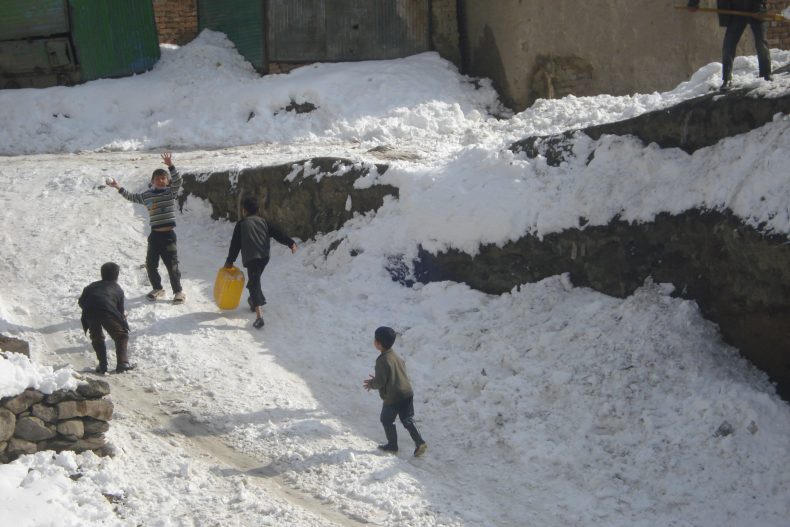 Children play in the snow in Kabul. Image by Muhammad Idrees.

During the last decade. the transportation, medical, education, and telecommunication sectors (among others) have seen remarkable changes thanks to private investment. Besides public schools, private schools opened their doors as the literacy rate of the city reached 64.8 percent. In the medical sector, new investment is making progress, including the founding of the Afghanistan Cancer Foundation last year.

It is true that the city is facing challenges: insecurity, pollution, congestion, corruption, poor administration, and law and order problems. However, the state, with the help of its people, can work to overcome these problems. Kabulis are not terrified and they enjoy their lives as usual. They expect the government to take care of the problems they are facing, as Kabulis are eager and determined to bring back their city’s golden age.

Muhammad Idrees is a freelance journalist.

In Afghanistan’s Capital, Air Pollution May Be Even Deadlier Than War

Kabul is now one of the world’s most polluted cities.

Afghanistan's capital is not even half as dangerous as everyone thinks.

Afghans Fight Back with Full Force

The most recent overnight attack on a guesthouse in Kabul resulted in only four Taliban casualties.

In the run-up to the Afghan elections, deserted streets and shops in Kabul speak to a tense and anxious populace.

China’s Bridge Over the Pangong Tso in Ladakh

In general, bridges bring people together and facilitate trade. But for India’s Ladakhis, the bridge across the Pangong Tso brings uncertainty and apprehension.