North Korea’s submarine force is one of the more capable wings of its generally decrepit military. The current force’s strength lies mostly in its numbers — North Korea possesses roughly 70 submarines in all, roughly 40 of which are its newest Shark-class vessels. (Though still dangerous to its adversaries, even the Shark-class reflects pretty dated technology.) With that number, the DPRK can and does crowd its coasts with torpedo-armed or mine-laying submarines, establishing a respectable anti-surface capability near its waters. Though most of its submarine force is old, loud, or both, still North Korea tinkers on, boldly determined to achieve a reliable sea-based nuclear deterrent.

To this effect, the DPRK is building the new Gorae-class submarine (or Sinpo-class) and testing Submarine-Launched Ballistic Missiles (SLBMs) accordingly. Remarkably, most of this activity and materiel are headquartered within a few kilometers of each other in the city of Sinpo and the nearby Mayang-Do Naval Base. Shipyards for the new Gorae-class, SLBM research and development facilities, many or most of the DPRK’s east coast submarines, and the only known ground-based launch platforms for SLBM tests — all are located along the same 35 square kilometer stretch of the North Korean coast. A well-coordinated first strike on this facility would hamstring the North’s submarine fleet, its submarine building capacity, and its hopes of a credible naval nuclear deterrent all in one go. 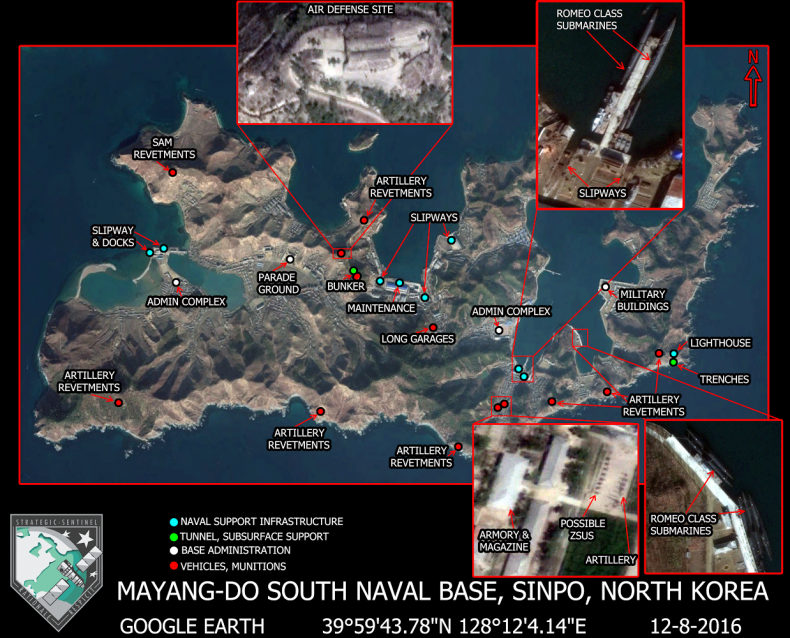 Sinpo, a small city bordering the Sea of Japan, has been building North Korean submarines for decades. Sinpo’s shipyards churned out dozens of the aforementioned Shark-class submarines in the 1990s, and are now constructing more of the newest Gorae-class as well. (Nuclear missile submarines are generally larger than their conventional counterparts — Gorae, not incidentally, is Korean for “whale.”) As Joe Bermudez, a renowned expert on North Korean military matters, reported — twice — this particular vessel may very well undergo more testing and tweaking before more are built. In light of Sinpo’s history with the Shark-class, its current status as headquarters for the Gorae, and the overall prominence of submarines within the DPRK Navy, North Korea undoubtedly regards Sinpo as one of its most valuable shipbuilding sites.

Not content with the prospect of a mobile, surface-launched ICBM capability, North Korea is simultaneously — albeit much more slowly — working toward a sea-based nuclear deterrent. Crafting a reliable SLBM is a long, arduous process, full of tests, setbacks, and incremental improvement. Lamentably, however, North Korean ballistic missile development is progressing much faster than historical precedent would suggest, thanks in large part to newly unemployed Soviet scientists traveling to Pyongyang as the Cold War ended. Still, rigorous testing is necessary for new models to be considered remotely reliable, and the North has yet to come near this threshold in its SLBM program. 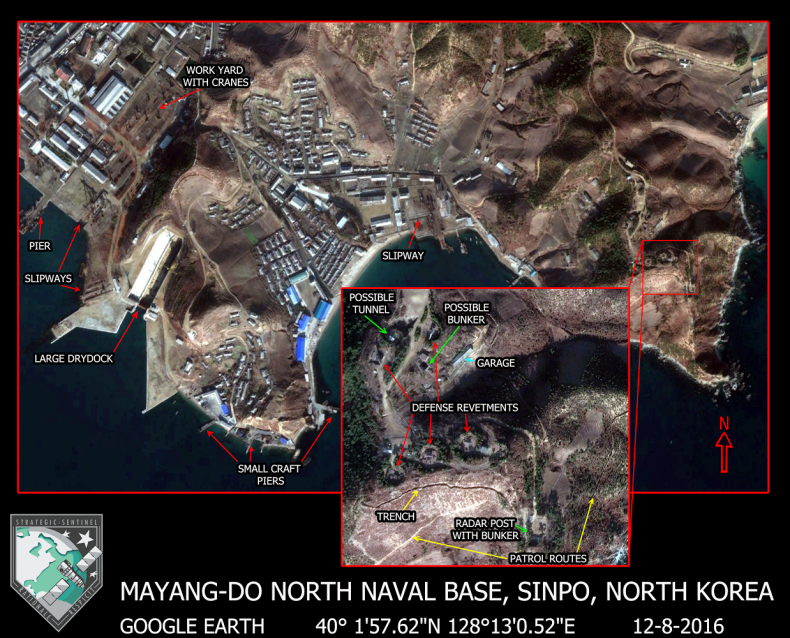 A very poor test of an infant SLBM program could result in substantial damage to the submarine itself. To avoid any such potential and costly destruction, North Korea has constructed a land-based SLBM launch platform at Sinpo, barely a kilometer away from the Gorae’s submarine pen. We believe this to be the only such facility heretofore identified by open-source intelligence. Destroying it — and the Gorae next door — would deliver a crushing body blow to the North’s SLBM program. 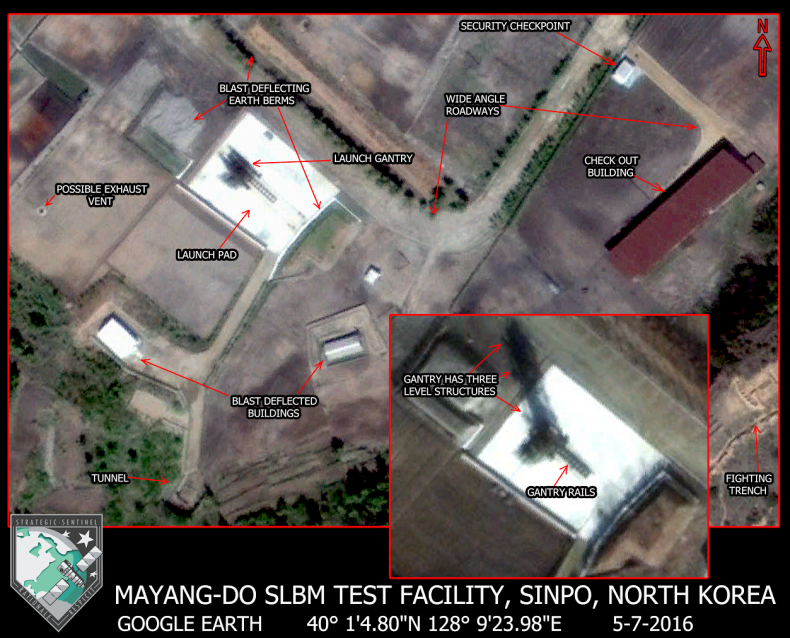 Whether North Korea could realistically achieve a working long-range, nuclear SLBM by 2025 remains in serious doubt. Actually producing a functioning naval nuclear deterrent is several other matters entirely. The Gorae-class subs would need to be both quiet and capable of traveling the length of the Pacific Ocean to get into range of the United States, and both of these prospects seem a ways off. Once the vessel design is perfected, North Korea would need to produce at least six such submarines to maintain a continuous, credible deterrent. Then there’s the need for reliable command, control, and communications infrastructure, all of which would need to markedly improve on current conditions. North Korea remains rather far from a sea-based deterrent; one successful strike on Sinpo could set them back many more years.

Scanning a satellite photograph (dated December 2016) of Sinpo’s naval facilities and the Mayang-Do Naval Base not three kilometers off the coast, I personally counted over 25 docked submarines. Satellite imagery from March and May of that year do not reveal quite so many, but still well over a dozen are clearly visible. Most of these were the older, less capable Yono­- and Romeo-class models. Still: the quantity of submarines facing simultaneous destruction is more than high enough to warrant attention; these smaller submarines can be used to traffic North Korean Special Ops into South Korean territory; the brand new Gorae lies within two kilometers of the other clustered submarines; and the research, testing, and naval support facilities add substantially to the base’s strategic value. 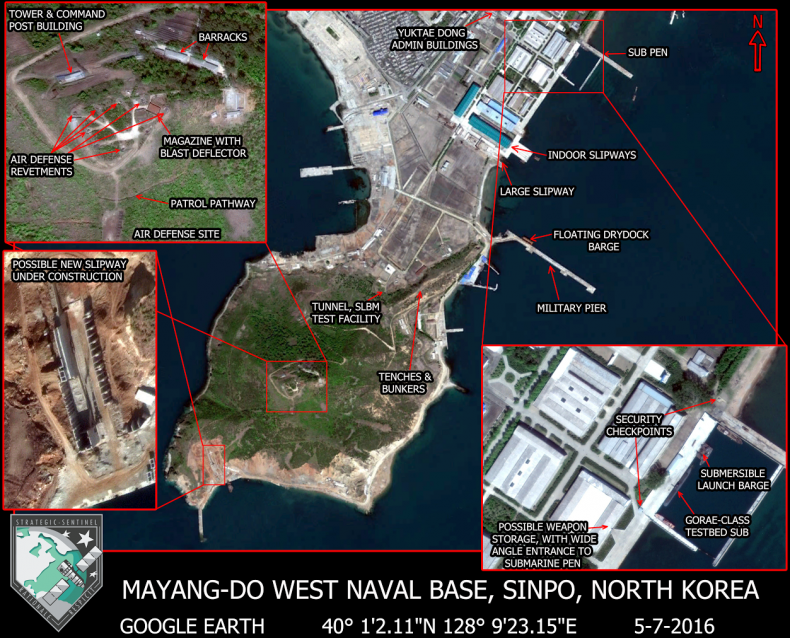 Predictably, a surprise strike would be practically necessary to eliminate all of these assets in one fell swoop. The DPRK would be expected to disperse their submarines during times of heightened tension. (Note that the satellite images from March 2016 — taken during the annual U.S.-South Korea military exercises — show fewer submarines than in December.) A surprise strike could effectively cripple the North Korean East Sea Fleet; recall that submarines are the backbone of the DPRK Navy. Mayang-Do is one of but two east coast submarine bases, and Sinpo is the flagship of the North’s SLBM program.

Rarely in military strategy do significance and vulnerability pair as smoothly together as they do at Sinpo and Mayang-Do. Generally, a base’s significance bestows upon it a certain vulnerability, for shrewd adversaries tend to strike their opponent’s center of gravity. This can then be ameliorated with physical fortifications, air defense networks, missile defense systems, secrecy, and so on. But truly, little in North Korea is “well defended” by modern military standards.

Sinpo and its related military facilities lie within close range of Toksan and Iwon air bases, both loaded with MiG-21 fighter aircraft. North Korea possesses several sophisticated or pseudo-sophisticated air defense systems, from the ancient SA-2 to the more modern KN-06. The KN-06 is very similar to the Russian S-300 and the Chinese HQ-9, the latter itself also being curiously similar to the S-300. This makes the KN-06 North Korea’s most advanced surface-to-air missile to date and the most plausible threat against American or allied aircraft. The KN-06 is still undergoing testing, however, and it is unclear how many batteries the North plans to produce.

As of right now, MiG-21s and S-200s look to be the most likely defenders of Sinpo and Mayang-Do. These platforms represent no real threat to the U.S., South Korean, or Japanese air forces. In Operation Desert Storm, American F-15s made quick work of Iraqi MiG-21s, 23s, 29s, and Su-25s. North Korea does not currently operate a single aircraft better than those the United States easily defeated over 25 years ago. Perhaps the North Korean Air Force or its SAMs would get lucky and destroy a few U.S. aircraft. Perhaps they get really lucky and slay a few more. Unless they can somehow shoot down most of the planes involved in a first strike — possibly including stealthy F-22s and B-2s or pseudo-stealthy F-35s — and intercept the cruise missiles fired from American and allied ships, the North Koreans would not be able to defend their base from utter destruction.

A strike on Sinpo and the island of Mayang-Do would be a tactician’s dream. One full salvo on the submarines stationed there (and their supportive infrastructure) could constitute the most brutally efficient military operation of the next Korean War. The risk-reward ratio dramatically favors the aggressor. Esteemed professionals — two former secretaries of defense, for example — have called for preventative strikes against North Korean military facilities. That is not what I am doing here. But should an aggressor choose to target Sinpo in such a wave, they could simultaneously cripple much of North Korea’s submarine force and slam its SLBM program to a halt.

Nighttime in Pyongyang: Aesthetics and Deterrence Under Kim Jong Un

By focusing exclusively on the traditional hard power implications of North Korea’s missile systems, analysts are missing much of Pyongyang’s strategy.

A Return to Form in North Korea?

Kim Jong Un gets back to missile testing.

The tests featured a new type of short-range ballistic missile system known to U.S. authorities as the KN24.