During the long dry season in Cabo Verde, harmattan winds from the Sahara fill the sky with a dull yellow hue. Red volcanic outcrops and wind-swept desert plains reinforce the archipelago’s remote and severe atmosphere. For most of history, Cabo Verde’s ten islands, located 600 miles off the coast of West Africa, remained completely free of humanity’s imprint. Atlantic gales eventually brought the Portuguese in 1456 and they soon established Ribeira Grande (now Cidade Velha) on Santiago Island, the first European colonial city in the tropics. Lisbon capitalized on Cabo Verde’s strategic location to reach the Americas, southern Africa and eventually Asia. Christopher Columbus and Vasco da Gama made stops during their voyages beyond. Later empire builders like the British took an interest as well: During the 19th century, São Vicente, a windward island, housed an important coaling station that furthered the influence of the imperial navy and British commerce.

The hidden bays and concealed gulfs of Cabo Verde have also attracted pirates and scoundrels. In 1585, Francis Drake, the notorious English privateer, sacked Riberia Grande and the Portuguese eventually moved the colonial seat to Praia, the current capital city, adjacent to a more defensible harbor. In modern times, Cabo Verde has struggled against drug traffickers who have threatened the calm and unique stability of this African democracy. In response, the United States has provided security assistance to enhance the country’s ability to monitor its sea lanes and airspace, which link South America with Europe and West Africa. Cabo Verde also received $110 million in Millennium Challenge Corporation (MCC) funds to upgrade the Port of Praia and preserve the nation’s position on the transatlantic crossroads.

With few available natural resources, Cabo Verdeans are dependent on their connection to the outside world. Services, particularly tourism and transportation, dominate the economy. The country’s most significant exports are its distinct creole culture and people. In turn, as one of Sub-Saharan Africa’s leading recipients of remittances, Cabo Verde relies heavily on its large diaspora, a significant portion of whom reside in the Boston area, a legacy of the 18th century New England whaling industry. The nation’s outward migration is also a result of intermittent periods of drought and famine. In the words of the Central Intelligence Agency, precipitation is “meager and erratic.”

A Chinese-funded mega-project, however, is promising to make it rain in Cabo Verde.

Macau Legend Development Ltd (Macau Legend), led by billionaire David Chow, has begun constructing a $275-million casino complex on Santiago Island. The luxury development will feature hotels, office buildings, property development, retail, dining, convention center, museum, function areas, a clubhouse and a marina. The ambitious design calls for extensive land reclamation and island-building that will radically alter Praia’s harbor. It is unclear whether the project will draw upon technical experience from Chinese construction activities in the South China Sea. However, Chow credits the project with being an extension of China’s “One Belt, One Road” – Beijing’s strategy to connect China with the world via a wide range of investments and infrastructure projects. This geopolitical initiative builds upon frameworks articulated by Chinese President Xi Jinping in 2013, the “Silk Road Economic Belt” and “21st-Century Maritime Silk Road.” At a minimum, the project represents China’s increasing presence in Africa and the understated influence of Sino-Lusophone ties that date back to the colonial era. 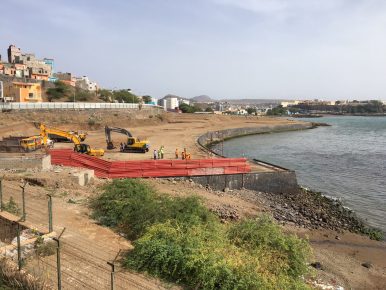 To secure the development, Cabo Verde granted a multipart concession, as disclosed on the Hong Kong stock exchange. Macau Legend, via Cabo Verde subsidiaries, received a 75-year land concession and a 25-year gaming concession that includes an initial 15-year exclusive right to gambling on Santiago Island. The developer also enjoys a 10-year exclusive nationwide license for online gaming and sports betting, physical and online. Macau Legend will pay a gaming tax of 10 percent of gross gaming revenue, but will enjoy tax breaks such as a 25 percent deduction from the gaming tax for VIP patrons for the first five years of operation and an exemption from income and property taxes for the first ten years. In return for the gaming concession, Mr. Chow has paid a one-time premium of approximately $10 million.

A Chinese super casino may seem like a curious bet for one of Africa’s longtime success stories. Since its independence in 1975, Cabo Verde has avoided the typical pitfalls on the post-colonial path. The country is considered a model of democratic governance and scores relatively high on development indicators from literacy rates to health metrics to government transparency. Cabo Verde was the first African state – and the second worldwide – to complete its first MCC Compact, which is designed to promote poverty reduction and sustainable economic growth through good governance, open markets, and human capacity building. By embracing economic liberalization and democratic accountability, the country has experienced an impressive record of growth, nearly 6 percent on average from 1994 to 2012.

But even as the country has graduated to lower middle income status, with assistance from sponsors like the United States, Cabo Verde remains highly indebted. The public debt is approximately 125 percent of gross domestic product (GDP), according to World Bank data. A project worth $275 million, starting with a $10 million cash infusion, is a significant boost to a country with an annual GDP of $1.6 billion. Gambling could also buttress the critical tourism sector, which is still recovering from spillover effects from the Ebola crisis in West Africa. Chinese funds may also be a necessary alternative given drastic cuts to the U.S. State Department and foreign assistance programs under U.S. President Donald Trump’s “America First” budget. 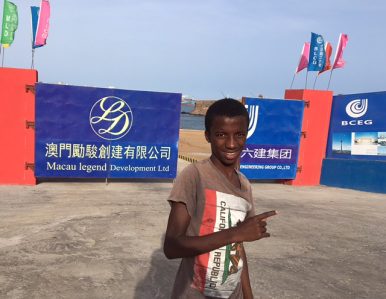 Nevertheless, questions remain as to whether the Chinese mega-project represents the type of foreign investment that is consistent with Cabo Verde’s long-term interests. The vast majority of Cabo Verde’s 500,000 citizens cannot afford a seat at the roulette table. Indeed, the promise of grand casino projects has proved illusory in the past, as Trump himself can attest. There may also be unintended social costs for a country where the rule of law has prevented the creation of a rogue’s paradise.

During the brief wet season, August to September, the country becomes a resplendent green, a temporary veneer of vegetation hiding the harsh volcanic earth below. Eventually the rain clouds dissipate, the sun’s glare returns, and the blossoms wither away. With the influx of Chinese casino money, Cabo Verdeans are hoping for a more a sustainable outcome. But there is a risk that the artificial Chinese island in Praia will not take hold, that the green season will be short. For now, armed with a Macau bankroll, Cabo Verde is willing to gamble on its future.

Roncevert Ganan Almond is a partner at The Wicks Group, based in Washington, D.C. He has advised the U.S.-China Economic and Security Review Commission on issues concerning international law and written extensively on maritime disputes in the Asia-Pacific. The views expressed here are strictly his own.

Perceptions of China's role on the continent depend on who's telling the stories.

Cyprus: The Next Stop of China’s Belt and Road Initiative

Cyprus' geographical location, EU membership, and importance as a transshipment hub have drawn interest from Beijing.

Does Guinea’s Coup Matter to China?

While its bauxite and iron ore deposits make Guinea important to China, context is everything.

China’s Presence in Africa Is at Heart Political

Beijing’s outreach to Africa is largely driven by the desire for support on the international stage from the continent’s 54 countries.