The two Tu-95MS bombers flew down Japan’s east coast along the perimeter of Japanese airspace over the Pacific Ocean passing Hokkaido and Honshu until performing a U-turn at an offshore area near Tokyo. The Il-20 aircraft was deployed to the Sea of Japan flying down Japan’s west coast until steering westward to return to Russian territory east off the South Korean island of Ulleungdo.

The aircraft came as close as 36 miles from Japan, but Japanese airspace was not trespassed, according to the MoD. 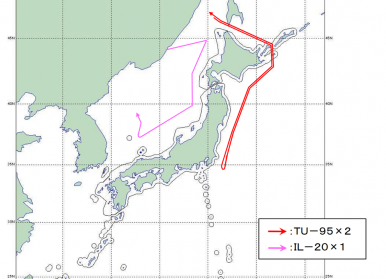 Furthermore, Japan’s MoD did not corroborate earlier media reports that Russia, in addition to the Tu-95s and Il-20, also deployed two Ilyushin Il-38 fighters and two Tupolev Tu-142s off the coast of Hokkaido and the Sea of Japan respectively.

In late January, three Tu-95s circumnavigated the major islands — Hokkaido, Honshu, Shikoku, and Kyushu — of the Japanese archipelago. According to a newly released MoD statistic, encounters with Russian military aircraft rose 4.5 percent over the last fiscal year to 301 scrambles.

In comparison, fiscal year 2015 saw 288 JASDF sorties in reaction to Russian military aircraft. With 473 JASDF scrambles, 2014 remains the top year for Russian incursions. Overall, the MoD reports that the JASDF scrambled its fighter jets 1,168 times in fiscal year 2016, up from 873 in 2015.

In January 2016, two Russian Tu-95 bombers circled Japan’s major islands and in March 2015, Russian bombers flew in close vicinity to the Ryukyu Islands. While a common occurrence during Soviet times, Russia stopped conducting regular bomber patrols in the Pacific in the 1990s and early 2000s. Moscow only resumed regular patrols following its fallout with the West as a result of the Ukraine crisis in 2014.

As I explained in October 2016 (See: “Russia to Set up Heavy Bomber Division to Patrol Japan, Hawaii, and Guam”), Russia is standing up a new long-range heavy bomber division in Russia’s Far East to patrol the Pacific Ocean inside the Japan-Hawaii-Guam triangle:

The new unit will eventually consist of several dozen Tu-95MS strategic missile bombers and Tu-22M3 long-range bombers. “The Tupolev Tu-95MS, an improved variant of the older Tu-95, is a four-engine, long-range, turboprop, strategic bomber that can be armed with a wide range of weapons including stand-off cruise missiles. Russia intends to operate 20 Tu-95MS by the end of 2016,” I explained. The new division is based on the 6953rd Guards’ Red Banner, Pacific Air Group, which conducted patrols within the Japan-Hawaii-Guam triangle during the Cold War.

Russia also announced in February that it will deploy an army division on the Kuril Islands — known in Japan as the Northern Territories. The Kurils are a disputed archipelago located in the Sea of Okhotsk in the Northwest Pacific following their seizure by the Soviet Union in 1945.

Japanese Fighter Jets Intercept Nuclear-Capable Russian Bombers Near US Base

Two Russian bombers hurtled close to U.S. and Japanese bases including Misawa Air Base, Yokosuka Naval Base and Atsugi Air Base.

This constitutes one of the largest single presence of Russian military aircraft near Japanese airspace in recent years.