On Friday evening, local time, North Korea carried out what is thought to be its second-ever flight-test of the Hwasong-14/KN20 intercontinental ballistic missile (ICBM). The test comes just weeks after Pyongyang’s first test of the system on July 4. The launch took place at 11:11 pm local time in North Korea.

According to a U.S. government source with knowledge of North Korea’s weapons programs, Friday’s launch took place from Mupyong-ni in North Korea’s Chagang province, not from Kusong, where the first test occurred. As The Diplomat reported earlier, the United States government had seen “a Hwasong-14 transporter-erector and firing-table transporter in Kusong” as recently as this week.

According to the source, North Korea demonstrated a range of 1,000 kilometers with its flight test on Friday, landing the missile’s reentry vehicle in the East Sea or Sea of Japan inside Japan’s exclusive economic zone, according to Japan’s chief cabinet secretary, Yoshihide Suga. The performance of the reentry vehicle, the part of the missile that returns to earth carrying the payload, is unknown.

Additionally, the missile launched on Friday demonstrated a 3,700 kilometer apogee and a flight time of 47 minutes. Both of these numbers are considerably greater than 2,811 kilometer apogee and 37 minute flight time reported for the July 4 test and suggest that North Korea purposely did not test the Hwasong-14 to near its full capability during that test. 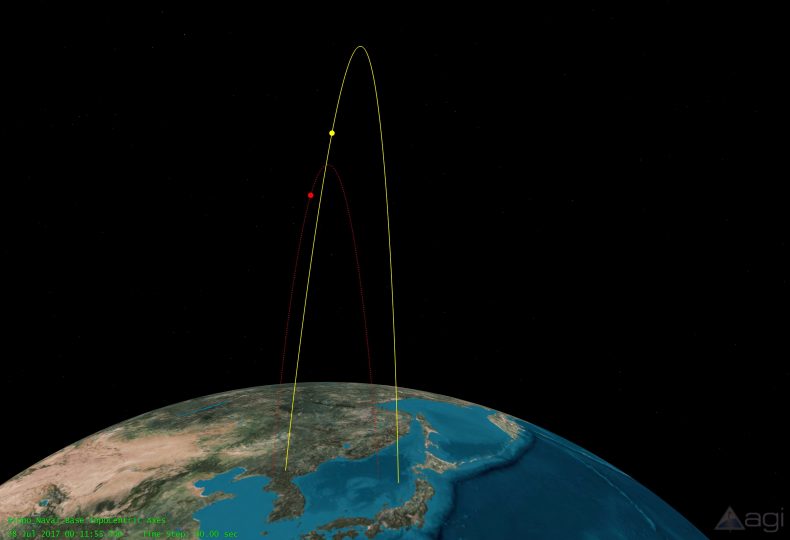 Contrary to the above assessments, the Russian Ministry of Defense has assessed the launch on Friday as a “medium-range ballistic missile” that flew to a range of 732 kilometers with an apogee of 681 kilometers. Russia also denied that the July 4 launch from North Korea involved an ICBM, despite opinions to the contrary from the governments of the United States, North Korea, Japan, South Korea, and China. As a result, the United Nations Security Council has still been unable to respond in a united way to North Korea’s first IBCM test.

When North Korea tests long-range missiles like ICBMs and intermediate-range ballistic missiles, it often fires them at what’s known as a lofted trajectory to avoid overflying Japan. As a result, the observed range is shortened, but experts are nevertheless able to extrapolate what the missile’s demonstrated range might convert to at what’s known as a minimum energy trajectory — the kind of trajectory North Korea would use to maximize its ICBM’s range.

The nearly 1,000 kilometer extension of the Hwasong-14’s apogee would allow for North Korea’s missile engineers to observe increased stress on the system’s reentry vehicle. As it reenters the atmosphere, the reentry vehicle needs to be capable of surviving incredibly high temperatures and avoid tumbling at hypersonic speeds.

A 30 kiloton nuclear airburst — a common estimate for the boosted fission device North Korea is thought to have tested in September 2016 — would require a reentry vehicle to survive to approximately an altitude of 1 kilometer. North Korea’s July 4 Hwasong-14 reentry vehicle is thought to have survived to that altitude, according to a U.S. government source who spoke to The Diplomat.

Based on the July 28 launch, preliminary impressions are that North Korea would be capable of easily ranging the contiguous United States. This contradicts earlier assessments of the Hwasong-14, which, based on the demonstrated July 4 fight, said that it would only be capable of striking Alaska and parts of Hawaii. The July 28 test would suggest that North Korea could potentially reach targets as far away as New York City and Washington, DC, depending on the size of its weapons payload.

David Wright at the Union of Concerned Scientists, based on figures first reported by The Diplomat, estimates the Hwasong-14 may now be capable of flying to a range of 10,400 kilometers and potentially 11,000 kilometers. Wright notes that if the unknown payload used for testing “was lighter than the actual warhead the missile would carry, the ranges would be shorter than those estimated.”

All signs now point to North Korea getting ever closer to operationalizing an ICBM that can range the U.S. mainland — a long-sought strategic objective for the country.

Listen to a recent collaborative podcast between the Diplomat and the Arms Control Wonk podcast on North Korea’s Hwasong-14 ICBM.

Why Is Russia Denying That North Korea Launched an ICBM?

North Korea definitely tested an ICBM on July 4, 2017, so why is Russia denying it did?

Gen. Joseph Dunford recommends that the U.S. plan as if North Korea can strike today with an ICBM.

North Korea claims to have tested a two-stage thermonuclear device ready for use in an ICBM.