On June 8, 2017, North Korea carried out the first-ever test of its Kumsong-3 coastal defense cruise missile (CDCM) from near Wonsan, on the country’s east coast. The system, which is known by the U.S. government as the KN19 and was first seen at the April 15, 2017, parade in Pyongyang, is based on a much older ship-based Kumsong-3 anti-ship cruise missile (known by the U.S. government as the KN01), which is itself based on the Soviet-designed Zvedza Kh-35 anti-ship cruise missile. The new CDCM configuration is recognizable by its distinct integrated, all-terrain launcher, which features four missile canisters.

North Korea has had a stockpile of Russian Kh-35 Uran missiles in its possession since at least the mid-1990s and has even exported it to third countries, including Myanmar, whose navy has incorporated Kumsong-3 launchers on its F11 Aung Zeya-class frigate.

The Korean People’s Navy also features the Kumsong-3 as a primary weapon system on its new corvette and, in February 2015, Kim Jong-un observed a ship-based test launch. Despite the long-known status of this system, the June 2017 test of this system generated some attention, given the novelty of the caterpillar-treaded transporter-erector-launcher (TEL) configuration.

But there was more to the June 8 test than the introduction of a new launch configuration.

The Diplomat has learned that the KN19, or Kumsong-3 CDCM, contains important evolutionary guidance and maneuverability improvements on North Korea’s existing Kh-35 variant missiles. According to a U.S. government source with knowledge of North Korea’s weapons programs, the Kumsong-3 variant tested on June 8 successfully demonstrated waypoint maneuvers in flight at a range of 240 kilometers and featured a more advanced guidance suite in its seeker.

Of the four cruise missiles tested on that day, at least three successfully struck a target ship, which sat near the North Korean naval base at Mayang-do, which is approximately 90 kilometers from the observed launch site near Wonsan airport. According to the source, the KN19’s missiles also feature considerably upgraded seekers, comprising active radar and infrared homing for terminal guidance.

To strike the target ship, the KN19 missiles first flew out into the Sea of Japan perpendicular to the coast from Wonsan, flying farther east than the location of the target ship at a low altitude. Thereafter, the missiles successfully made at least two left turns each to fly back toward the North Korean coast, with at least three eventually successfully striking the vessel off the coast of Mayang-do, near Sinpo.

The target vessel featured large white triangular radar reflectors to simulate a larger target ship like one the system’s active radar homing seeker may encounter in combat. The total demonstrated flight range of the missiles was roughly 240 kilometers. A representative trajectory of the June 8 test is shown below. 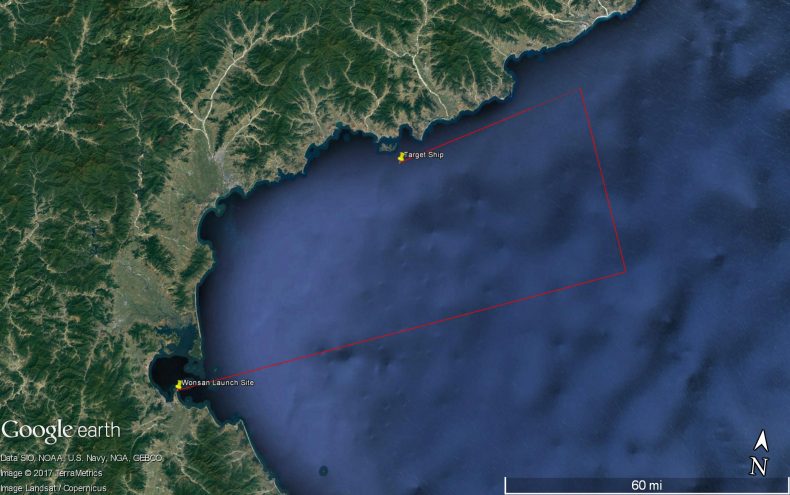 This assessment, reported here for the first time, aligns with North Korea’s claimed parameters for the test. The country’s Korea Central News Agency, the state’s propaganda mouthpiece, noted after the test that “[the] launched cruise rockets accurately detected and hit the floating targets on the East Sea of Korea after making circular flights.” While not all four missiles tested were successful, the claim of “circular” flight was not exaggerated.

North Korea’s released video and imagery of the launch does not show evidence of the waypoint maneuvers of the missiles, which occurred out in the Sea of Japan. The imagery does, however, show missiles striking the target successfully. More interestingly, in at least two released images, North Korean leader Kim Jong-un is seen with a map of the anticipated trajectory to be used in the test. A closer look at the map (below) shows a trajectory with preprogrammed waypoints toward the fixed target point near Mayang-do. (Some South Korean media sources have commented on the trajectory shown on Kim’s map.)

The significance of North Korea having demonstrated waypoint maneuvering in flight with its new CDCM is primarily of technical value for now, with limited realistic tactical applications given expected gaps in the Korean People’s Navy’s coastal intelligence, surveillance, and reconnaissance capabilities. Unlike the static target vessel, in combat conditions, enemy ships for North Korea’s Kumsong-3 batteries will be moving at sea and deploying countermeasures.

Additionally, on a more basic level, low-altitude sea-skimming cruise missiles benefit from waypoint maneuvers by bypassing known threats and obstacles while in flight to their desired target. For North Korea to make the most of this capability, it would first require detailed awareness of its coastal threat environment — a potentially challenging prospect for the Korean People’s Army and Navy during wartime.

Finally, while North Korea does have coastal radar arrays, it’s unknown just how well its CDCM crews could synthesize rapidly shifting targeting information in wartime. Unlike more advanced systems, North Korea does not appear to possess the ability to update the flight path or target for its new Kumsong-3s in midcourse.

Nevertheless, the technical achievement is impressive. After what may be more than two decades of experience with the Zvedza Kh-35 anti-ship cruise missile, North Korea has managed to successfully engineer a brand new integrated TEL for a CDCM configuration and introduce waypoint maneuvering.

It remains unclear if these upgrades to the KN19 missile’s homing and guidance suite are entirely indigenous, but if so, it would represent a formidable step in North Korea’s ability to modify existing foreign missile systems in its inventory.

The author is grateful to Dave Schmerler for imagery research assistance.

North Korea launched multiple ballistic missiles into the Sea of Japan from what is possibly a brand-new system.

Putin has used nuclear threats to prevent direct NATO intervention in the Ukraine War. Could China do the same in a Taiwan conflict?

Assessing the Outcomes of the U.S.-ASEAN Special Summit

The meeting fulfilled its purpose as a symbolic statement of American commitment, but came up short on the specifics.

Marcos might not have been the ideal choice of many U.S. policymakers, but he offers the opportunity for a more stable and predictable partnership.

The meeting could mark a turning-point in the bloc's approach to the ongoing conflict in its errant member-state.