Images released by North Korea’s Korea Central News Agency (KCNA) showed that little had changed physically about this missile since we first saw it fly successfully in May 2017. (North Korea had attempted three flight tests in April—all of which failed.)

As is common, one of the images released by KCNA showed North Korean leader Kim Jong-un sitting with a map that was just visible enough and high resolution enough for open source analysts to scrutinize it for a better idea of what the intended trajectory of the launch may have been.

One such analysis, published by Marco Langbroek on his blog, suggests that the observed range of the missile on Tuesday morning—2,700 kilometers per U.S. and Japanese intelligence—may have been far shorter than what North Korea intended. Langbroek’s georeferencing of the map (shown below) makes this point obvious. 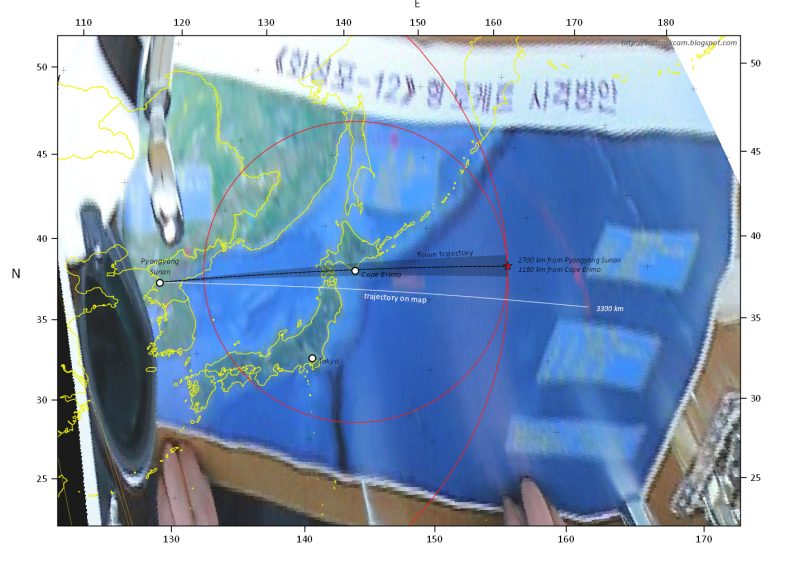 There are two conclusions that may be drawn from this analysis. North Korea’s missile either did not perform to spec during the test or the map Kim Jong-un was given is not a reliable indicator of the actual trajectory sought during the flight test.

Previous tests where maps have been visible for scrutiny have revealed similar discrepancies. (Notably, a map of North Korea’s first intercontinental-range ballistic missile flight in July showed a splashdown point that likely was not the actual point of impact for its reentry vehicle.)

More evidence in the coming days and weeks about this launch should help formulate a better assessment about what North Korea was seeking to observe technically from what is, to date, it’s longest-range flight of a ballistic missile.

One data point shared with me by a U.S. government source with access to the latest intelligence on North Korea’s ballistic missile programs is that the burn time—or powered flight time—of the August 29 test was much shorter than the May test.

The August 29 missile burned its engines for 110 seconds—much shorter than the 139 seconds observed during the first-ever successful flight of the KN17, which took the missile to an apogee of 2,811 kilometers.

The short burn time confirms that North Korea cut the missile’s engines early during this test or experienced an unplanned engine shutoff, shortening the trajectory from a longer one. A longer trajectory, of course, would have had the added political benefit of showing that the KN17 is indeed capable of striking ranges as far as Guam—North Korea’s highest-value Pacific military target for now.

There may have been much more going on with this test as well. One analysis from Mike Elleman speculates as to the possibility that North Korea piloted use of a post-boost vehicle with the KN17. North Korea may have also fired the August 29 missile at a depressed trajectory—a possible contributor to the observed trajectory.

As a closing note, it looks increasingly like Pyongyang deliberately chose a trajectory that would overfly Japan while minimizing the actual risk posed to Japanese territory. It appears, for example, that the overflight of Hokkaido transpired with the missile well into the midcourse phase of flight, when its altitude was well in exoatmospheric ranges.

Moreover, the azimuth meant that the missile likely flew over the Tsugaru Strait, which separates Hokkaido from Honshu. The most populous Japanese city to have faced direct risk from the missile, had it failed in midcourse, would have been Hakodate. Either way, it’s not difficult to imagine a trajectory that would have put far more Japanese territory directly underneath the path of this missile.

It’s worth recalling too that despite this test easily being the most provocative North Korean ballistic missile launch ever, the core purpose wasn’t to prod and provoke Japan. I take a look at the probable logic behind this launch in a recent article for The Atlantic.

Did North Korea's Latest Missile Not Fly As Far As Intended?

The missile that flew over Japan may not have flown to its intended impact point.

We Need to Talk About North Korea's Intermediate-Range Ballistic Missiles

Zeroing in on North Korea's intercontinental-range ballistic missiles is a counterproductive approach for the Trump administration.

The launch is North Korea's first since its test of a claimed thermonuclear bomb on September 3.

The last nuclear explosion on the order of what North Korea demonstrated on Sunday was in 1996.

Across the former Soviet Union, improved rankings for selective governance indicators tend to give a misleading view of governments' ability to reform themselves.

By Andrew Hood and Bob Savic

Since its exit from the European Union, London has moved swiftly to deepen its relationship with a fast-growing region.

The recent entry of Chinese vessels into Indonesia's EEZ highlights the need for Jakarta to get serious about protecting its sovereignty.

In a ruling, the court stated that Facebook’s citing of a privacy provision to withhold the records from Myanmar was “rich with irony.”