The following is a funny but inspiring, lively but serious, absurd but bold story happening in China. It involves no schemes nor high level politics, yet it illustrates a part of China — that complicated and unpredictable country — with a somewhat happy ending. It shows that the China’s millennials are participating in civic engagement in their own way — a more humorous, less confrontational way compared to their predecessors. Yet, this conscious civic engagement might be a force that pushes the tightly state-controlled society toward a more open and autonomous one.

A Flash of Genius of a Young Artist

Ge Yulu, 27, a recent graduate with a Master’s degree in Experimental Art from China Central Academy of Fine Arts (CAFA), suddenly rose to fame in China because of one of his works of art: the Chinese media recently discovered that he had secretly named a road in Beijing after himself three years ago. 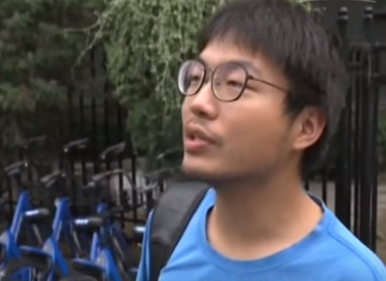 Lu (路) means “road” in Chinese. Thus Ge Yulu, the three-character Chinese name, looks perfectly like the name for a road: Ge Yu Road. Ge Yulu said in a podcast interview that he used to hate his name when he was young, because his three-character name was too complex to scribble. He didn’t realize his name’s unique value until he started to pursue his bachelor’s degree in Visual Media Art from the Hubei Institute of Fine Art in 2009.

“It would be awesome if my name could be seen everywhere!” said Ge, “And what better way than to embed my name in the public domain?”

Ge started to implement his flash of genius by printing self-made street signs bearing his own name and pasting them on the streets.

Yet the idea didn’t really take off until he went to China’s capital, Beijing, where his graduate school CAFA is located. There he happened to find a road without a street sign.

“My road is right in the place where my office located!” Ge noted, so he immediately pasted his sign. “It’s very simple: a blue sign with white characters — my name — and two arrows and the English translation.”

The mischievous act became reality in 2014. One day, Ge’s colleague discovered that the road under his name had appeared in AutoNavi map (the Chinese equivalent of Google Maps) and told Ge about it.

“I played dumb at that time, while everyone in the office laughed,” Ge recalled. “Now that it had become a fact, I decided to make it more real!”

Ge did some field research on other official street signs and copied the exact format for his own sign.

“On the day I installed my sign, some pedestrians did show their curiosity. They asked me: ‘What are you doing?’ I replied: ‘Installing the street sign.’ Then they just left without more questions, since they wouldn’t know if I had the authority. ”

Since the road was between a high-end residential neighborhood, he even added a “no-horn sign” for local residents’ benefit. “Since I named the road, I felt I had the responsibility to take good care of the road,” Ge explained. Ge even had plans to make plan to improve “his road,” such as adding some trash bins for people’s convenience.

“Since the road became mine, I felt very connected to the people passing by,” Ge added.

Ge shot a video of the road, recording what had happened along “Ge Yu Road” for one day. He remembered a man and his beautiful girlfriend parked their Maserati along the road and went back home in each other’s embrace. “They must be very rich, as they drove such a luxurious car and lived in such a high-end neighborhood, but I felt we shared something similar despite our very different financial status.”

One of his happiest memories about the road was when he received a restaurant’s text: “Welcome to the Ge Yu Road xx restaurant.”

“I was so happy that I had had a wonderful meal in the restaurant that day.” said Ge.

Ge did everything in a very low-profile manner. “I was expecting to see people getting used to the fact, and I hoped that Ge Yu Road could exit forever.” People used the name Ge Yu Road when calling for delivery; streetlights were numbered with the title of Ge Yu Road. 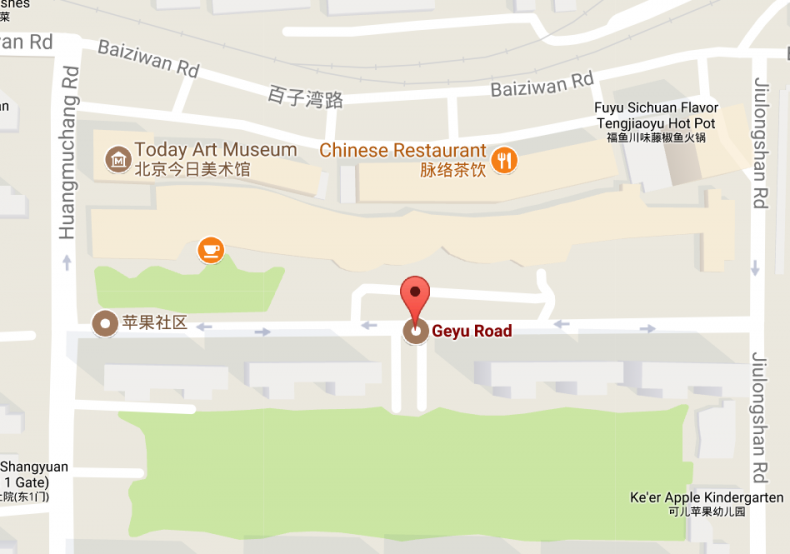 A Spark on the Internet

Ge Yu Road together with Ge himself went unnoticed until May 2017, when Ge was about to graduate from CAFA and he decided to use the story of the road as his final graduation project.

On July 9, Ge’s friend posted his project on China’s Quora-like Q&A website in a reply to the question “What are the skills that don’t seem easy but actually everyone can acquire?” Ge’s project immediately went viral and won thousands of thumbs-up.

“WOW, was it really so dramatic?!” Ge didn’t believe his newfound fame at first. “I didn’t realize it has become an incident until I appeared on the newspapers.”

It did, indeed, become an incident.

To Ge’s surprise, the majority of public opinion didn’t blame Ge for his transgression, but praised his assistance to ordinary people’s lives and questioned the government’s negligence.

Even China Central Television (CCTV), one of the most official mouthpieces of the Chinese government, reported about Ge Yu Road and called for society to tolerate such goodwill performance art.

Many media suggested that the Beijing government maintain the road as it was and take it as a good lesson for future governing.

“After reading those reports, I started to feel optimistic, too. I thought the government might really keep my road, considering that my behavior didn’t hurt anyone.” explained Ge. “In addition, it could be a wonderful way for the government to manage a public crisis.”

The End of the Road

Unfortunately, Ge’s behavior did hurt — it made the local government lose face.

On July 12, the Beijing authorities claimed that the street actually had had an official name since 2005, but it just didn’t have a street sign yet. On July 13, the authorities removed Ge’s signs within three minutes, as witnessed by multiple reporters and cameras.

“I didn’t go there on purpose. I expected that the city authority would show up and say something official. I didn’t want to steal his thunder,” said Ge. “I particularly didn’t want to confront with the authorities, because I think a confrontation won’t lead to good consequences.”

“When I saw the news photo, I found it very interesting that they made one sign for every 100 meters, as if they wanted to suppress something there,” Ge said.

The road was called Ge Yu Road for three years, became famous on the Internet for three days, and was removed within three minutes.

Although Ge Yu Road has come to its end, Ge Yulu’s story is far from ending.

Ge, a millennial born in 1990, showed clear self-awareness in his performance artwork:

My goal for the project is to evoke the public’s awareness of civic engagement and to help people to have some connection with the city they live in. Many people think that the city doesn’t belong to them because they don’t have power, or status, or money. But I want to let the public know that they can acquire some autonomy in the city as long as they change their view toward the city. They might find that a brick, a tilt, or a tree would look different to them and they might be able to share some responsibility of the public space with the government.

Actually, Ge had other artworks that were also about individuals’ resistance in public space. For example, he once stared closely at a surveillance camera on the street for hours until the policeman behind the camera showed up and had a talk with him. He explained his intent about this artwork as well:

What I questioned was the power of surveillance… I cannot make a real change to it, but I think staring was very romantic. The person behind the camera would see my eyes staring at him and at that moment, he’d feel something humane and warm.

How the Chinese State Mobilized Civil Society to Fight COVID-19

The COVID-19 crisis pushed to the frontlines a civil society that is mobilized and led by the Chinese Communist Party, whether directly or indirectly.

To Fight the Next Pandemic, the World Needs Chinese Activists

The CCP’s sweeping crackdowns on civil society have left the whole world vulnerable.

By Jim Gomez and Aaron Favila

The most powerful typhoon to hit the Philippines this year slammed ashore in Burdeos town in Quezon province before nightfall on Sunday.

Canberra now seeks to play a leading diplomatic role in the global effort to cut carbon emissions, but actions are more important than words.

Ohn Thwin, 72, has become the highest-ranking figure to be killed by anti-regime guerrillas since last year's coup.

A communist party leader, Shailaja, was made to turn down the Magsaysay award on the ground that her success was the outcome of collective effort. But communists do sometimes promote individuals over the collective.