“I first went in 2009 to investigate as a viable place to send clients,” says Jay Tindall, a photographer, videographer, and entrepreneur in Asia. “It was one of these places that, people who’ve been everywhere haven’t been to North Korea.”

Jay would return in 2010, 2014, and 2017 — one of the last groups of Americans permitted to visit the country. On this last and perhaps final visit to the country, Jay used his camera to capture the Hermit Kingdom in a new light, shifting perceptions from a stolid dictatorship of the 1950s to something a bit more dynamic.

“The 2009 and 2010 North Korea was more of what people think of when they think of the North Korea on TV – no traffic, very stark,” Jay tells The Diplomat. “The minders were much more strict than they are now. They really did watch every photo you took.”

In “Inside the North Korean Cocoon” Jay Tindall presents an North Korea stuck in time, certainly, but one that nonetheless struggles forward. Jay noted the change in infrastructure since his first visit: shiny glass buildings, microbreweries, and he points out that some were playing Nintendo emulator games on their Chinese knock-off phones, identified by fellow traveler Brett Bachman as Mario 64, Monument Valley, and even Farmville.

“Even though it’s modernizing, it’s still back in time a little bit,” Jay says when asked about the video’s style and editing choices. “They’re kinda playing catch up.”

“I didn’t find it difficult to shoot at all on my recent trip,” Jay says. “My guides were actually helping me shoot. […] I was on the Pyongyang metro and people were trying to report me for shooting and the guide actually spoke up for me, telling them I was allowed.”

Jay, of course, is something of an exception; a repeat visitor in the travel industry – even with the same guide – is a position that perhaps garners certain allowances. There were, of course, still rules: no military, no construction sites, nothing that might conceivably jeopardize national security.

On August 2, following steady nuclear developments and the brutal and highly-publicized death of American university student Otto Warmbier, Rex Tillerson’s State Department issued guidelines via the Federal Register that U.S. passports would be invalid for travel to the DPRK starting September 1. 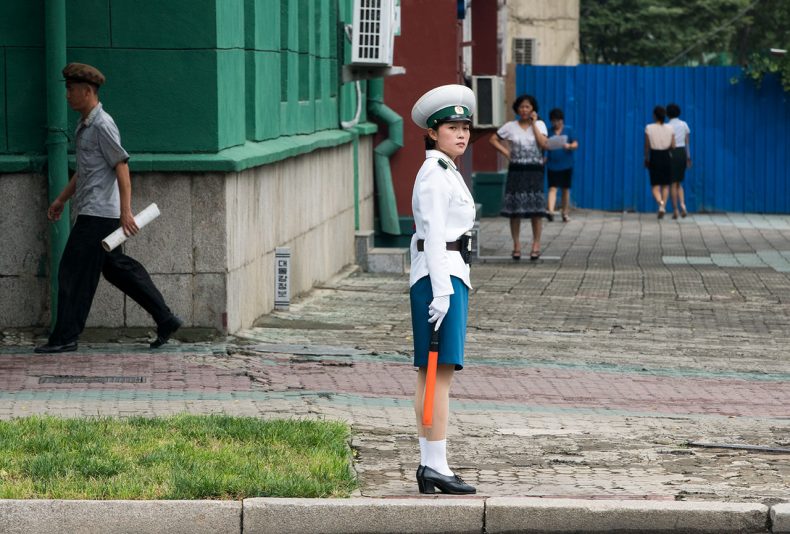 A crossingguard in North Korea. Photo by Jay Tindall.

Journalists, tour operators, and activists have opposed the travel ban to North Korea – as did the North Korean authorities who were cited by KCNA as saying that the ban was “childish” and that visits from the U.S. citizens allow them to see “the true picture of the DPRK that achieves victory after victory under the banner of simultaneously building up the economy and defense and the failure of the U.S. hostile policy towards the DPRK.” Those supporting the ban cite North Korea’s consistent status as the world’s worst human rights abuser, the country’s persistent nuclear tests, and safety concerns.

“Inside the North Korean Cocoon” emphasizes that North Korea is more than just one color:  jumping dolphins, blithe commuters, realist propaganda, water parks. There is a perpetual war on the mind, but also dancing.

“I wanted to show a side of normal life in Pyongyang that you never see on TV, not the military parades and Kim Jong Un and missiles,” Jay says. “It still feels like you’re in a time warp, but I’ve seen a lot of changes.”

China and Central Europe: The View From Warsaw

One Last Lens on North Korea

One of the last American tourists to visit North Korea hopes to showcase the country's complex nature.

Cairo remains one of Pyongyang’s leading trade partners in the Arab world.

An Opportunity to End the Korean War: We Can’t Let This Slip Away

The chair of South Korea's legislative foreign affairs committee argues that diplomacy with North Korea must remain a priority for the US, regardless of who wins the upcoming election.

Peace in Korea Can Happen Without Denuclearization

Pyongyang is going to remain a nuclear weapons state for the foreseeable future. U.S. policymakers must learn to live with this reality.

Chabahar Port and Iran’s Strategic Balancing With China and India

By Soroush Aliasgary and Marin Ekstrom

Both China and India seek to use Chabahar port for their own strategic interests. Iran can use that competition to its own advantage.

The Case for Renaming TECRO

Renaming Taiwan’s de facto embassy in the U.S. to “Taiwan Representative Office” would be both meaningful and consistent with U.S. foreign policy.

What is behind India's recent outreach to Armenia, including the first-ever visit by an Indian foreign minister?