There aren’t many words that sum up today’s economic growth paradigm in developing countries better than “infrastructure.” Roads, railways, airports, telecommunications grids, and power stations are being prioritized by governments all around the developing world. From Urumqi to Ulaanbaatar, Bangkok to Baku and beyond, policymakers in developing countries are forming a consensus that infrastructure is the critical ingredient for economic development.

The notion of infrastructure-led growth is not new, yet today it is more influential than ever before. Lessons drawn from China’s experience are a big factor in this growing influence; China’s sustained and exceptionally high investment rate has led to state-of-the-art airports, nationwide electrification, and pioneering high-speed railways, which have undeniably left the world marveling. This boom was fueled by a consistently high level of investment as a percentage of GDP compared to other major Asian economies. 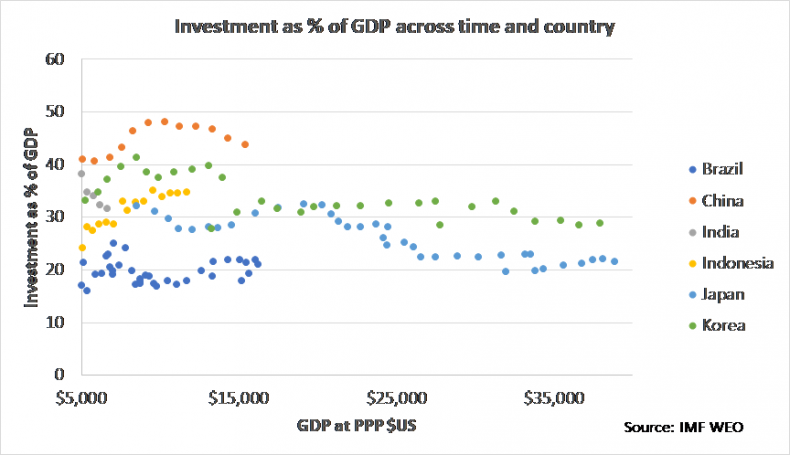 Given this new paradigm, developing countries around the world are racing to design robust national infrastructure plans. They are spurred by a growing global appetite for infrastructure investments. China’s Belt & Road Initiative (BRI) has much to do with this; not only is it providing unprecedented sums of financing, but it is beginning to normalize infrastructure investments in countries historically thought of as too risky to invest in. The latter is highlighted by new investors entering the infrastructure space; for example, the U.K. government recently launched a $1 billion fund to support the BRI and Citi Group have set up their own Belt and Road coverage unit.

Some of the proposed infrastructure plans are hugely ambitious and require staggering sums of investment. Indonesia needs $360 billion, or 40 percent of GDP, to finance its infrastructure plan up to 2019. India requires $1.5 trillion over the next decade and Kazakhstan aims to implement $40 billion (35 percent of GDP) worth of projects up to 2020 under its Nurly Zhol plan.

The list goes on. It does raise the question, however, of whether all these countries employing similar infrastructure strategies could succeed simultaneously? While global infrastructure capital pools have been increasing in size, they are still a long way from meeting the total annual demand which the Asian Development Bank estimates at $1.7 trillion in emerging Asia alone. In a competitive race for funds, countries may also inflate their infrastructure need and those responsible for project design may overstate benefits in what Bent Flyvbjerg describes in his “Machiavellian formula”: (under-estimate costs) + (over-estimate revenues) + (under-value environmental and social impacts) + (over-value wider economic development effects, or spillover effects) = (win project approval).

As Ansar et al (2016) describe, the “result of these realpolitik tactics in the appraisal, selection, and building of infrastructure projects is an unhealthy ‘survival of the unfittest’ by which the ‘worst infrastructure gets built.’” Investing in these unproductive projects may cause short term construction booms, but a bust when the project benefits fail to materialize, resulting in bad debt that is difficult to repay. Hambantota port in Sri Lanka is the latest in a recent flurry of BRI projects turning sour; over-burdened by its debt liabilities, the Sri Lankan government has had to cede control of the port to its Chinese owners.

While due diligence is being conducted before investing in projects, good projects are difficult to come by. Steve Howard, international advisor to the Asian Infrastructure Investment Bank, recently remarked that the AIIB – even with its thorough and rigorous investment process – is having great difficulties finding suitable private sector projects.

Perhaps more importantly, infrastructure-led growth models only work under certain conditions. Infrastructure must be seen as an enabling condition that facilitates growth over the medium term through improving logistics, fostering industrial development and encouraging tourism. That is to say, infrastructure is a means to an end and not an end in itself. China coincided infrastructure growth with economic reforms that stimulated industry, particularly the manufacturing sector. As China grew, propelled by its industry sector, so did its ability to finance more infrastructure.

Failing to develop plans to stimulate industry while investing heavily in infrastructure will only make it harder to generate the growth over the medium term that can contribute tax revenues to fund more infrastructure – thereby thwarting the infrastructure-led growth strategy. There is a significant risk that in policymakers’ new-found obsession for infrastructure, they forego efforts and resources to develop industry. But the two must be seen hand-in-hand, even though developing industry is becoming harder in an era of automation that reduces the importance of low-cost labor for manufacturing. Yet, the alternative is far worse; projects laden with bad debt and limited utilization; short-term construction booms followed by protracted busts.

Ravi Prasad is a Yenching Scholar at Peking University and Research Associate at the Institute for New Structural Economics in Beijing. He is the founder of www.beltandroad.blog

H.I. Sutton on the Future of Underwater Warfare in the Indo-Pacific Region

What are some of the future strategic and technological challenges to submarine forces in the region?

RCEP, along with the CPTPP, will help drive deep integration in Asia. Holdouts like India will suffer the most.

Asia Slowdown: Are the Good Times Gone for Good?

Emerging Asia has seen remarkably stable growth since the global financial crisis. Is that trend now coming to an end?

Growth projections remain cautious, but there are promising signs Asia may be snapping out of its slowdown.

Trade frictions and a China slowdown could bring down growth for the rest of Asia.