Editor’s note: the following story contains images and content that may be disturbing to some readers.

In most parts of the world, stories about witch-hunts are confined to documentaries and mini-series. But in the Southeast Asian nation of Papua New Guinea, real-life witch-hunts that end in torture or murder are so commonplace they rarely make the evening news. Most also go uninvestigated by police. This comes despite the introduction of the death penalty for witch-hunting in 2013, after Kepari Leniata, a 20-year-old woman accused of using witchcraft to kill a neighbor’s boy, was burnt alive on a busy street corner as hundreds of people looked on.

But late last year, when news broke that a six-year-old girl accused of sorcery had been tortured by a group of men and only narrowly escaped with her life following a daring rescue mission by lay-missionary Anton Lutz from Iowa, the story made headlines not only in PNG but across the world.

The drama began when a man fell ill at a remote village in Enga Province in the highlands of PNG. It could have been HIV/AIDS or just an upset stomach. But his sickness was diagnosed as kaikai lewa (to eat the heart), where a witch uses black magic to secretly remove and eat the victim’s heart to gain their virility. As the daughter of a woman who’d been accused of the same crime, the six-year-old girl was fingered as the prime suspect. So a group of villagers took her, stripped her naked, and tortured her for days, using hot knives to remove the skin from her back and buttocks.

By the time Lutz arrived at the village, the man whose illness had sparked the witch-hunt had staged a miraculous recovery. The perpetrators read this to mean their gruesome work had worked and incentivized the little witch to return his heart. There was no need to torture her any further – now. “After a couple of hours talking to the community, I was able to get her released into my care and took her to a hospital,” Lutz told me when I visited PNG in December. 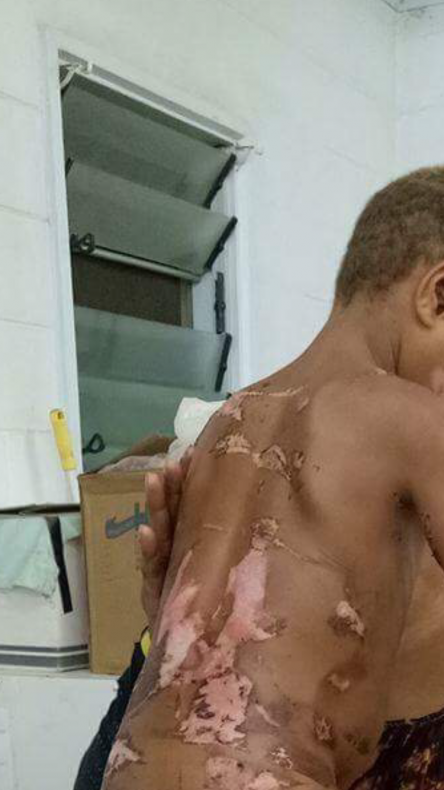 The scars left on the abducted six-year-old.

And there the story would have ended – just another of the 1,000-odd violent witch-hunts that according to Oxfam take place in the country every year. But when the New Guinea Tribal Foundation, a charity that helped Lutz plan and execute the rescue, published a photo of the six-year-old girl’s disfigured back on Facebook – and concurrently revealed she was Kepari Leniata’s daughter – the story went viral. Prime Minister Peter O’Neill warned the perpetrators they had a committed a capital offense, while Police Minister Jelta Wong announcing the formation of a special task force. “We’re going after these people,” he said.

The horrific injustices unleashed upon the Leniata women also sparked deep soul-searching across the nation. PNG has developed rapidly in recent years, with roads, mobile phones, and the internet now connecting hundreds of once-isolated communities with the rest of the country and the 21st century. So why do the majority of Papuans still believe in sorcery? And what can be done to once and all put an end to this utterly despicable form of social terrorism?

To understand why belief in something as ridiculous as sorcery remains a quotidian fact of life across all geographic and socio-economic divides in PNG, one must first understand the nation’s contemporary history. In the late 1800s, the conglomeration of more than 800 perpetually warring and cannibalistic tribes was thrust unprepared by German colonialists into the modern age, while highland regions like Enga remained undiscovered well into the late 1930s. Constructs like animism, ancestor worship, and sorcery, which have been used to make sense of the world since time immemorial, have not been easy to cast aside – even among PNG’s most educated people.

“A few years ago, I was in bed with my wife when my legs started vibrating violently,” says Joseph Suwamaru, an educator in the capital Port Moresby. “My wife tried to hold them down and it was transferred to her body like a possession. I started yelling ‘In the name of God I command you to leave this house!’ and it did.” He adds: “It’s difficult for me to believe this nonsense. I have two masters degrees and a Ph.D. but I’m caught between two worlds.”

That, according to Lutz, is the crux of the problem. “You may have a certificate but you think vampires are real because you don’t have a rational point of view in every respect [and] are willing to believe in urban legends,” he says. “I call it being educated but not educated.”

Belief in witchcraft in North America and Europe died out in the early in the early 1800s – a period corresponding to the industrial revolution and significant socio-economic development. But in PNG, where industrial-scale mining has delivered great change in the form of jobs and mobility over the past 30 years, the opposite appears to have occurred. Attacks on people accused of practicing witchcraft have spread from remote areas in the highlands to large towns and cities where the problem hadn’t existed before.

One answer can be found in the Westernization of diets and change of lifestyle, which in turn have brought new health problems like HIV/AIDS, diabetes, and heart disease. Poorer health outcomes create more accusation-based violence where relatives seek scapegoats to mitigate their grief. There have also been a lot more attacks on men accused of sorcery in recent years over land issues and soaring land prices associated with industrialization.

“There’s a hidden motivation behind the attack – where people accuse landowners of sorcery so they can take their land,” Lutz says.

Another reason behind the violence is that there really are no legal consequences for witch-hunting in PNG. A 20-year-long study by the Australian National University of 1,440 cases of torture and 600 killings found less than one percent of perpetrators were successfully prosecuted.

The Leniata family’s case is a textbook example. Not one of the men who tortured, sexually assaulted, and immolated Kepari Leniata in 2013 was charged, even though police officers witnessed the event. And despite Police Minister Wong’s promise to “go after” the men who abducted and tortured Leniata’s daughter, the investigation has apparently stalled. Police have been up to the village four times but the community has been reluctant to give evidence. Witnesses know if they talk the perpetrators could burn their houses down after the police are gone. The code of silence even extends to the victims themselves because there are no witness protection programs in PNG. In any case, police are hopelessly understaffed, underpaid, and undertrained, and just as likely to believe the accused are guilty of using black magic.

Overcrowding in prisons and regular breakouts also discourage police from investigating crimes, while the courts, though competent, don’t function in a meaningful way. Backlogs of unheard cases go back years due to a lack of courtrooms and a large number of aging judges.

Academics believe the answer to stamping out accusation-based violence lies in grassroots advocacy and education. “There need to be pathways to deal with concerns about sorcery anxieties nonviolently through dialogue, mediation, medical information, grief counselling, and village court processes,” says Dr. Miranda Forsyth, an Australian anthropologist specializing in PNG.

The launch of the Sorcery National Action Plan in 2015 – a holistic approach that focuses on counselling, awareness, health advocacy, protection, and research – was a step in the right direction, but a lack of funding has hindered proper implementation of the plan.

Launched in November, Oxfam’s new campaign Inap Nau! (Enough Now!) looks at the problem from a gender-based perspective. About 70 percent of females in PNG experience rape or assault in their lifetime, while domestic violence against women and girls is normalized. Changing the way men value and portray women PNG is an obvious first step to stamping out to the ridiculous notion that women use black magic to remove and eat men’s hearts on occasion.

Amid all the torture and killing and pain, there have been a few sparks of progress. Two days after the story on Lutz’s rescue mission made global headlines, nine men accused of using sorcery to kill a man in a village in Eastern Highlands Province were handed to police unharmed. “For the first time, people accused of sorcery are not tortured or murdered,” police told The National newspaper in Port Moresby. “I commend fellow villagers for respecting the rule of law.”

And in another small mercy, the six-year-old victim is now on the mend. “She is in a safe location and doing very well,” says Lutz. “We are very optimistic as for what the future holds for her – but that will be an ongoing discussion between her father and guardians.”

A festive but tense ceremony marks the end of a years-long conflict resolution process in Mongol, PNG.

Witchcraft killings are proving to be one of the country’s most persistent problems.

Every year, dozens of men, women and children are brutally murdered on accusations of witchcraft or sorcery.

Is Corruption a Serious Problem in the Pacific?

A recent report illustrates that the people of the Pacific believe corruption is a massive problem for both them and their governments.