There are numerous examples of the successful and tangible manifestations of China’s Africa policy all across the continent. Two recent projects have placed a spotlight on Ethiopia, where the Chinese presence is overwhelming: the first modern light railway (tram) system of sub-Saharan Africa in the capital, Addis Ababa, and the Addis-Djibouti railway, connecting the landlocked country to the maritime trade routes of the Gulf of Aden and the Red Sea. In this two-part analysis, we evaluate these Chinese investments after visiting these projects in January 2018. Part 1 looked at the light railway; below, we explain our findings on the Addis-Djibouti railway.

If you have ever been to any of the newly built railway stations in China, you will not be surprised by the interior of the waiting hall at the Furi-Lebu Station. Though smaller in size, it is designed using the same standards, even using the very same colors and displays. The only difference is that it was built in Addis Ababa, the capital of Ethiopia, to serve as the first station of the New National Railway Network in Ethiopia.

While the media covered the brand new Addis Ababa-Djibouti Railway connection after its completion, there were loads of question marks in the story that we wished to unravel. In order to do so, beside searching for sources and conducting interviews, we decided to travel to Furi-Lebu Station to find out everything about the project humanly possible.

The first wall we bumped into was determining the location of the station. While it was finished and inaugurated at the end of 2016, few had a clue about its whereabouts. Luckily, our driver (recommended by a superb Czech Ethiopia expert, Jan Záhořík) made a few calls and drove us out of the city to the middle of nowhere.

This is not an exaggeration. It took nearly an hour and a half to get to the station from Addis Ababa (outside of rush hour, and without road construction, the trip probably could have been 20 minutes faster. The roads were not finished on the last 3 kilometers of the trip, so we had to take dirt roads in order to arrive at what is billed as the country’s brand new main station.

Furi-Lebu Station, viewed from a distance. Photo by Istvan Tarrosy.

The Addis Ababa-Djibouti railway is a roughly 759 kilometer-long railway connecting the capitals of Ethiopia and Djibouti. Constructed between 2011 and 2016, it was financed by the Ethiopian government and by a loan from China’s Exim Bank. Details are not quite clear, but according to an article published by one of the embassies of Ethiopia, the total cost of construction reached $4.5 billion, at least half a billion more than originally planned. According to various sources, China’s ExIm Bank offered a loan of around $2.4-3 billion.

In 2017, the Ethiopian Railway Corporation (ERC) faced financial issues without having finished the project and the connecting infrastructure on time. According to reports, ERC had a stunning $3.7 billion in debt at the end of 2016, and had already started to repay those loans — without a functioning railway connection.

Apparently, Ethiopia decided to build a railway network with standard gauge railways, replacing the old colonial meter gauge lines, and the Addis Ababa-Djibouti route is the first one to be finished. As an official commented (all sic):

The reason why the trunk lines had not been built is that the Ethiopian government’s focus was on building the main railway line […] The construction of the trunk lines was not included in the contractual agreement. We first had to build the main line. Since the trunk lines are many we would need to conduct a study and build them later based on the study. We would connect the railway line to industrial zones, dry ports, national depot, and private depots.

So the rail connection was inaugurated in October 2016, and ERC was already paying back the loans from the summer of 2016, yet the railway failed to start operations in 2017. It was only on January 1, 2018 that trains started to operate – still with substantial challenges, as you will see. 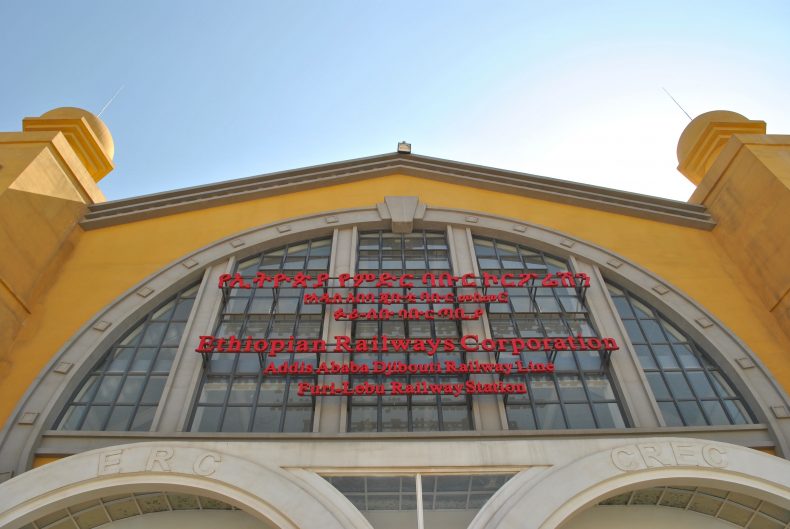 After arriving at the station, there was no activity and we bumped into a second wall: soldiers guarding the seemingly empty station. Since there is no other way you can buy a ticket before going to the station, it was quite interesting to see that our driver had to come up with a story in order the enter the massive, eclectic but impressive building.

The lack of infrastructure was clearly visible at the station itself as well. While there were ongoing construction work, and according to the plans, a new line of the city’s light railway system will also terminate here, the area was quiet – nearly abandoned. From the outside, nothing indicated that this was a Chinese project, but as mentioned above, inside the station we definitely had the “Made in China” feeling.

The ticket office was at another part of the building, separated from the waiting hall, with four out of eight ticket windows open. Considering the lack of interest at that time of the day, even this was a bit too much. The women at the ticket office were nice; we even learned that as foreigners, we should pay more for tickets than Ethiopian citizens. After the women spent more than ten minutes calculating the prices, a young Chinese male supervisor arrived to check if everything was okay. We chatted a bit with him in his mother tongue, which the Ethiopian staff members enjoyed.

As was the case with light railway system, this railway is also operated by a Chinese company — in this case a consortium of two companies, the China Railway Group (CREC) and the China Civil Engineering Construction Corporation (CRCC), which were responsible for the constructions as well. Their job now is to operate and maintain the line, and also train local personnel for an undisclosed fee until 2023. 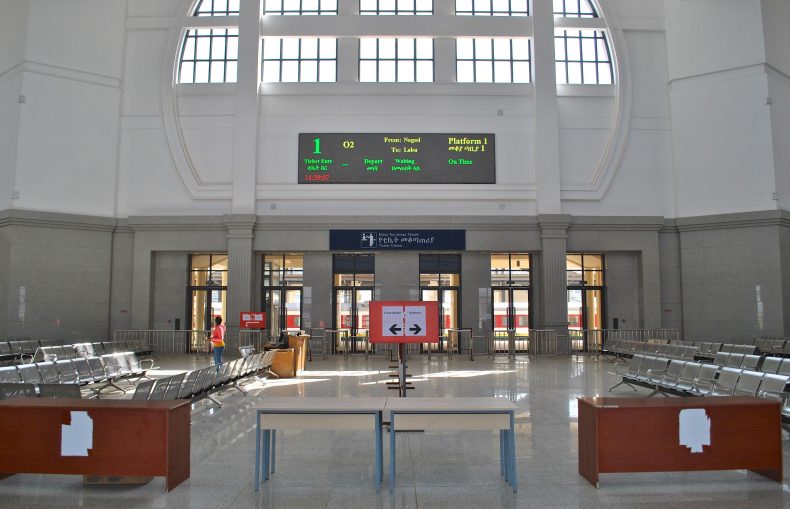 The waiting hall of Furi-Lebu station. Photo by Istvan Tarrosy.

After leaving the ticket office, we paid a visit to the waiting hall through the main entrance. It was empty, with locked doors leading toward the platforms. After taking a few photos, we were kindly asked by one of the soldiers to leave.

Train operation is still unpredictable. According to the timetable, passenger trains are to leave Addis on every odd numbered day, but in January there were still problems with keeping to the timetable because of collisions with various animals on the way as well as occasional power cuts – despite the fact that the system had been tested for more than a year.

As for the freight trains, there is still no reliable information about the amount of goods transported through the railway from Djibouti, but since the main station there is also outside of the city proper, there are a few pessimistic opinions about the operation. According to official data, the freight trains can move up to 3,500 tons at a time, but the actual transports will not be able to reach the desired capacity for many years.

This project, similarly to the light railway system, is failing to meet its original goals, which has quite alarming financial consequences. While the light railway was mainly constructed in order to ease Addis Ababa’s traffic issues, this railway was built in order to help the landlocked country to reach maritime trade routes, and also to import much needed fuel as well in order to boost the economy. Failing to generate income needed to repay the loans might have negative consequences for the ERC and thus on future projects, not to mention the Ethiopian government.

At the same time, it is of utmost importance that Ethiopian connectivity – and that of the entire continent – has been developing rapidly in order to bring some more benefits from the global economy and to ease prevailing disparities in the transnational global system, if only by a little. For this reason, China-built infrastructure projects are obviously welcomed by African governments.

The frequently asked question, however, will stay with us: Are African agencies equipped to make sound choices about what the best option is, and under what circumstances development should take place?

A year later, the authors revisit two major projects in Addis Ababa to see what has changed – and what hasn’t.

Time is ticking to repay Ethiopia's light rail debt, which is not going to be easy without making sufficient profit.

Ethiopia, with dreams of being a textile and apparel manufacturing hub, is following China's blueprint for industrial parks.