Linguist Sylvain Vogel’s interest in the minority and endangered languages of Afghanistan and Cambodia might have something to do with fact that he is a member of a German-speaking minority in rural France, whose own language and culture are also endangered.  After he graduated from college in 1977, Vogel was hired to teach French at the Lycée militaire in Kabul, Afghanistan where he also began to study Persian and Pashtu. Aside from a two-year break between 1983-1985, the linguist spent most of 1977-1991 in Afghanistan and Pakistan, where he developed a special affection for the region’s tribal societies. These fiercely independent people have never been conquered and their most sacred values are courage, revenge, hospitality, generosity to the defeated, and honor. “Much of my ethics, personal characteristics, and values,” Vogel explained, “were acquired in these surroundings.”

After conducting his fieldwork in the tribal areas of Balûchistân, Vogel returned to Paris in 1991 to defend his Ph.D. dissertation, “Aspects of the Pashto verb.” After the entrance examination to France’s largest governmental research institute, Centre national de la recherche scientifique (CNRS), Vogel was ranked number one in his class. The CNRS director of human sciences, however, reversed this decision and argued that Pashto did not matter because it was a dead language. Vogel was not admitted to the CNRS; instead they awarded him a bronze medal as a consolation prize and the French Foreign Ministry offered him a professorship at the Royal Cambodian University.

Professor Gerard Fussman of the College du France put it best, “Why no French scientific institution has wanted to recruit the very productive and brilliant linguist would probably make an interesting academic sociology article.”

No stranger to war-torn societies, Vogel moved to Phnom Penh, where he learned Khmer and began teaching. In his spare time, Vogel traveled to the Cambodian highlands and quickly fell in love with Mondulkiri, Cambodia’s most remote province. He explored the untamed forests on foot with little more than his rifle, mosquito net, canteen, and water purifying tablets. He felt very much at home in the dense forest and was especially fascinated by the Cambodia’s Bunong hill tribe (commonly referred to as Montagnards). 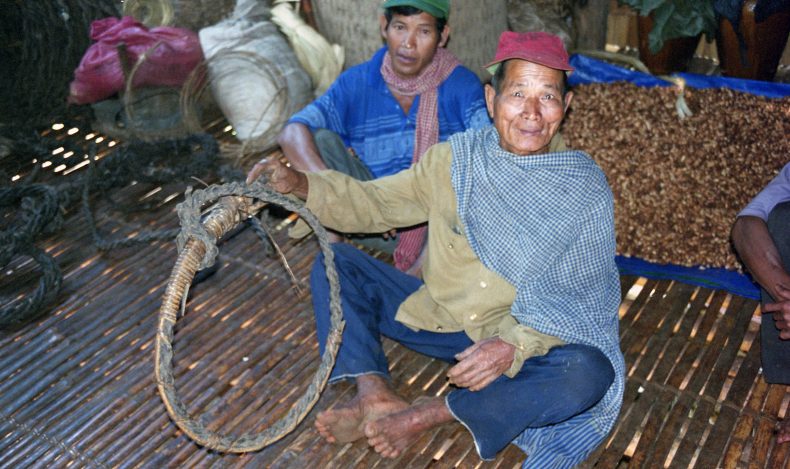 Like the Pashtu, the Bunong spoke their own language, had their own belief system, and harbored thinly-veiled contempt for both the Cambodians and Vietnamese. From the logs for their raised long houses to the game they hunted; from the crops they grew to the elephants they captured and trained —  the Bunong were once as self-sufficient as any people on earth. They shared the forest with elephants, tigers, leopards, bears, spitting cobras, and malarial mosquitoes.

Prior to the Vietnam War, one million people inhabited the highlands of Vietnam, Cambodia, and Laos, where more than 30 tribes spoke their own languages, worshiped their own gods and lived according to their own rules. By the time Phnom Penh and Saigon fell in 1975, approximately half of these tribes’ adult male population was dead and the survivors faced persecution from both the Vietnamese and Cambodian governments.

When Sylvain Vogel first encountered the Bunong in 1993, they lived outside of the Cambodian state’s laws and followed their own unwritten (orally transmitted) codes, which were based on social consensus and their animist religion.  Traditionally, they were independent people ‘governed”‘at the village level by charismatic chiefs called koraanh, who would assemble the tribesmen around the rice wine jar, drink, and make whatever sacrifices the situation required. Malaria, for example, was believed to be a result of the wrath of angry spirits and the location where the village was been built.

While some considered the Bunong to be dangerous and unpredictable, Vogel did not. Unlike many other outsiders, his agenda was purely academic — he was not trying to steal their land, convert them to Christianity, or impose Western conceptions of human rights on them. The linguist always tried to speak their language, eat their food, and sleep in their huts; the teetotaler even drank their rice wine when necessary. 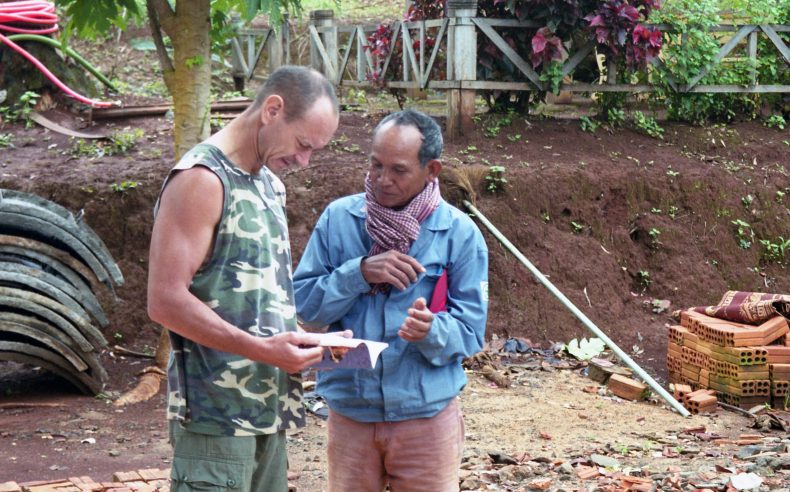 Nchhööp and Vogel work on translations. Photo by Peter Maguire.

By 1993, Sylvain Vogel was studying Bunong grammar and phonetics in Mondulkiri in his spare time. One day, a Bunong he often spoke with mentioned that he had an uncle named Nchhööp who could “write Bunong.” Vogel was amazed because he thought that this was an unwritten language. When they met, Nchhööp explained that he had been taught a script to notate the language by two French colonial officers during his youth.  The slight, 60-year-old highlander understood what Vogel was trying to do and took a very keen interest in his work. “He was my ‘master’ almost in the martial arts sense,” said Vogel, “in all aspects of Bunong culture.”

Initially the pair reviewed photographs and drawings and transcribed oral history interviews into the universal phonetic language. Vogel was amazed to learn that the Bunong had a vast body of unwritten literature that was passed down from generation to generation. Vogel believed that the structure of the aetiologic tales showed that the hill tribe lived in the forest and followed their own political system by choice, not necessity. An aetiological tale is very similar to a myth in that it tries, within the framework of a given culture, to account or explain for social facts that for some reason are puzzling or represent a problem for the society. The Bunong generally explain such facts by linking them to events that are said to have happened in the immemorial past, at a time when gods, heroes, and humans were still one big community. In traditional terms of reasoning, these philosophical stories of causation explained everything from the origins of the temples of Ankor Wat to why elephants, given their great size and strength, deferred to the Bunong. 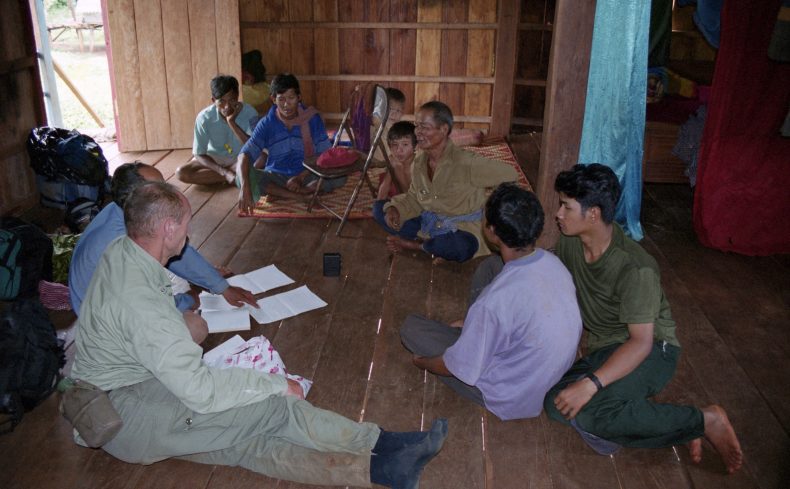 Over the next two decades, Vogel, with little or no support form the French government and holding down a full time teaching job, published the world’s most extensive body of work on the Bunong language and culture.  His first book Introduction à la langue et aux dits traditionnels des Phnong de Mondulkiri was published in 2008. Next came his study of Bunong grammar, Eléments de langue Phnong. UNESCO published Apects de la culture traditionelle des Bunong du Mondulkiri in 2010, and in 2015 came his tour de force, Voix du mondulkiri historique (“Traditional Voices of Mondulkiri”). This most recent work was an introduction to and collection of Bunong folktales, epics, and ritual songs that Vogel transcribed into the universal phonetic alphabet, and then translated into French. Vogel compared the Bunong epic poem to Homer’s Greek classic, The Iliad.

“Sylvain Vogel is no ordinary linguist,” wrote French historian Mathieu Guerin. “You need that to spend nearly two decades of your life studying the language of the Bunong of Mondolkiri in the highlands of Cambodia. He spent countless hours discussing with his informants, listening to koragn, elders who know, singing songs and telling tales. He attended the buffalo sacrifice and drank at the jar.” According to Guerin, not only did Vogel learn the language, he also gained a knowledge and understanding of Bunong society that no other outsider has ever achieved: “He can think the concepts that the people of the forest are using, concepts that are often very far away from our Western perspectives, in their own words. What Sylvain Vogel accomplished is astonishing.” 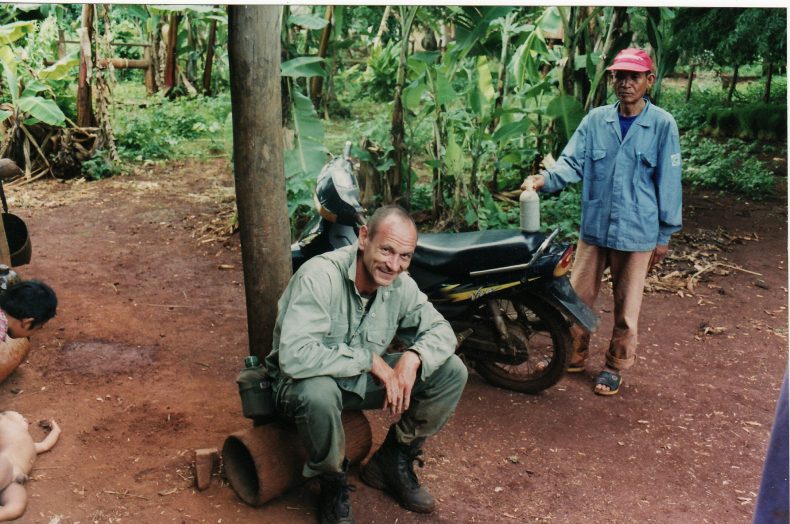 Sylvain Vogel and Nchhööp at a Bunong village. Photo by Peter Maguire.

As the Cambodian forest vanishes, so does the Bunong’s means of sustaining their traditional way of life. Although the Cambodian highlanders survived decades of war, globalism has proved to be their most daunting foe. The huge old growth mahogany, teak, and rosewood logs are now some of Cambodia’s most valuable exports. No group has been hit harder by logging than the Bunong because the forest is their home.

The French linguist believes that the disappearance of a culture, however it happens, is a loss for humanity. To Vogel, this is not a new phenomena; whether it is the Sioux in the American plains, the Aborigines in Tazmania, or his relatives in Lorraine, “ethnic minority cultures have been losing ground to the great powers for centuries.”

Sylvain Vogel is not sentimental man; he has no illusions about the Bunong’s future. “I offer no solutions. No wishful thinking, no politically correct language, or bleeding hearts can change a thing. I was only a witness who watched, with great sadness and a feeling of helplessness, the disappearance of a culture.”

Dr. Peter Maguire is the founder and director of the Fainting Robin Foundation and Sylvain Vogel is the foundation’s first distinguished scholar. Maguire is the author of Thai Stick:  Surfers, Scammers, and the Untold Story of the Marijuana Trade, Facing Death in Cambodia, and Law and War:  International Law and American History.

A French linguist's quest to document the dying language of Cambodia's Bunong people.

The country has long struggled to deal humanely with the refugees from Vietnam’s Central Highlands.

Cambodia has long been presented to the world through the viewfinders of foreign photographers – but that’s slowly starting to change.

Australia’s announcement that it will be building nuclear-powered submarines with American and British help will take years to pay military dividends, but the strategic impacts start immediately.

An ordinance that the Nepali prime minister introduced recently to ease the splitting of parties is proving counterproductive.

Indonesia Is Failing to Provide a Green Track for Industry

Industry is racing to get green, but Indonesia has paved the road with unsupportive regulation.