“We don’t go up to the mountain tops,” the village headman of Lobu Tayas in Sumatra told me, speaking in his ethnic Batak language through a translator. “Up there, many magic.” He shook his head and repeated it: “Many magic.”

Rising steeply about a half a kilometer behind him was a long, jungle-covered mountain ridge where we had installed a camera trap. In two weeks we procured an image of a tiger laying down and yawning right in front of the camera. The locals hear that tiger roar from time to time, and when it does, he said, people just stay inside their homes, and listen.

The “magic” that he spoke of is a kind of animist superstition. Specifically, he and the rest of the village fear something called the orang bunian, a kind of evil spirit of the forest. I first heard of the orang bunian in George Maxwell’s 1907 book In Malay Forests. He mentioned that in Peninsular Malaysia, local people were fearful of the “Orang Bunyi, the invisible Voice folk.” Maxwell goes on to add:  “It is worthy of notice that, though the Malays have been staunch Muhammadans for centuries, their aboriginal fear of the forest is so deeply rooted that it is to the spirits and not to Allah that they apply for protection.”

Much more recently, I found that the situation is much the same across the Strait in Sumatra.

Some who I spoke with think the orang bunian is the local variant of the orang pendek — or tropical yeti — that has reportedly stalked the mountains of Kerinci National Park in Jambi province for centuries. But this doesn’t sound quite right to me; the orang pendek is supposed to be a cryptic, empirical being, not a spirit. Stirring up the confusion, I was told that in Aceh it goes by the name of suke mante, among the Bataks it is called orang bunian, and in Kerinci it’s called orang pendek. Whatever the case, spirit or real creature, it is keeping the locals off the high mountains. This is what I was told in the half-dozen or so villages that we visited en route to the trailhead for our recent wildlife survey expedition. 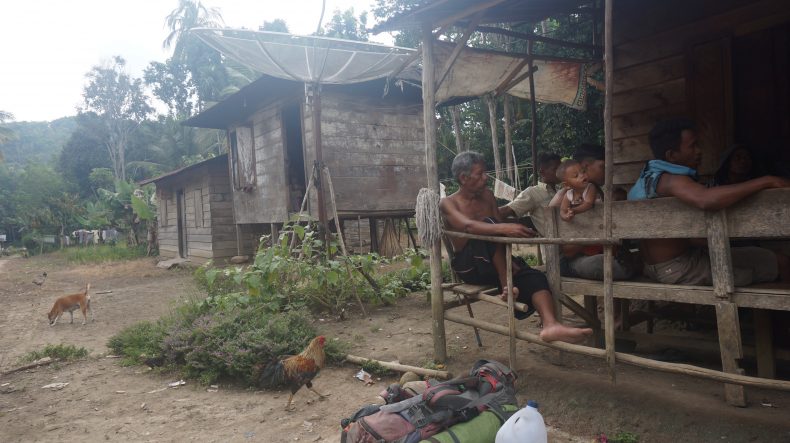 Residents of the last village before our ascent into the mountains discuss rumors of the orang bunian. Photo by Gregory McCann.

Animist beliefs have more benefits for wildlife than simply scaring villagers away from the forest. Why didn’t the villagers who we spoke with hunt the tiger that lived near them? Why not snare it, kill it, and be rid of it? I found an answer to this in the literature as well. Ruth Padel writes in her 2011 book Tigers in Red Weather:

Because real tigers are territorial, most old villages had a village tiger, harimau kampong, which they recognized. Our tiger, they called it. Our harimau nunga, the waiting tiger. It was probably an ancestor spirit, and would give a sign, or advize, when the village had a problem. It was part of the community. The tiger they were generally afraid of was harimau luar, the tiger from outside, the other tiger.

I ran this by Haray Sam Munthe, a local tiger expert, head of the grassroots NGO Sumatran Tiger Rangers, and our team leader. He agreed wholeheartedly that the tiger was not hunted because it was the “waiting tiger.”

“When the village has a problem,” Munthe explained to me. “The tiger will come down from the mountain and roar close by. The people will interpret what the tiger said and act accordingly. He will solve their problem for them.”

So we have friendly local tigers who give advice to villagers in times of distress, and we have malignant yeti-ghosts who strike fear into the hearts of locals and keep them off those mountain tops where the tigers — and other threatened wildlife — reside. That all of this is at odds with the Islamic faith is either ignored or not even considered.

Islam arrived in Aceh at the northern tip of Sumatra anywhere from 1,000 to 800 years ago, most likely from Indian traders but possibly directly from Arabia. It then spread south throughout the island, sometimes by force and bloodshed. Yet it is clear to me that, try as they might, the more radical Islamic adherents from Aceh never completely stamped out the old religion, animism. It lingers, and it is encouraging a kind of traditional environmental conservation ethic by keeping local people away from the last refuges of Endangered and Critically Endangered species such as the Sumatran tiger.

In fact, one of our key survey sites is a high plateau, and word has it that a nearby village was considering establishing a coffee plantation up there because of its relatively flat terrain. However, anxiety about the orang bunian, I was told, has kept villagers away. “They are tall with big red eyes,” a woman explained in the last village before our ascent into the mountain forests. She shook her head and looked askance.

In the previous village I was told they had large black eyes and dragged their knuckles on the ground. Not surprisingly, we camera trapped tigers — as well as other rare species — on the nearby mountains. In fact, while checking the memory cards in our cameras, Haray advised me to help spread among the locals the idea that orang bunian is alive and well in these parts. He suggested that upon our return, while passing back through the villages, we tell the locals that we not only saw their backwards-pointing footprints in the ground but actually saw the creatures themselves, and that they terrified us. “It keeps the people off the mountains,” he implored.

So, for the sake of wildlife conservation, I indulged in some lying, and had some fun with it. In order to keep a straight face, I tried to recall the pairs of large green fireflies wafting toward me at night on the trail, imagining them to be two eyes instead of two insects. After all, maybe that’s what the villagers saw anyway. Did I feel guilty about spreading untruths? Not really. I recall seeing some faces twist into grimaces and winces as I spun my yarns. Monkey torn to shreds with tail dangling from one tree and head resting on the branch of another? It was the work of the orang bunian. Strange footprints leading into the depths of the forest where I heard a soft voice calling my name? Orang bunian trying to get me. If those tall tales help keep humans and their snares and chainsaws away from the final refuges of the Sumatran tiger, then, as far as I’m concerned, there is nothing unethical about it.

And these animistic beliefs are not limited to our study area. Elsewhere in North Sumatra province this year, a tiger resting under a village hut was killed for fear of it being a “shape-shifting tiger,” or the Southeast Asian equivalent of the “werewolf.” In South Sumatra, villagers fighting a coal mine believe that they are the descendants of the Sumatran tiger. Friends of mine who work in ecotourism and conservation in Jambi province tell me that animism is alive and well among the ethnic Minangkabau people. Animism, it seems to me, is thriving — if quietly — in Islamic Sumatra today, and it might just be the most effective form of environmental conservation at work. 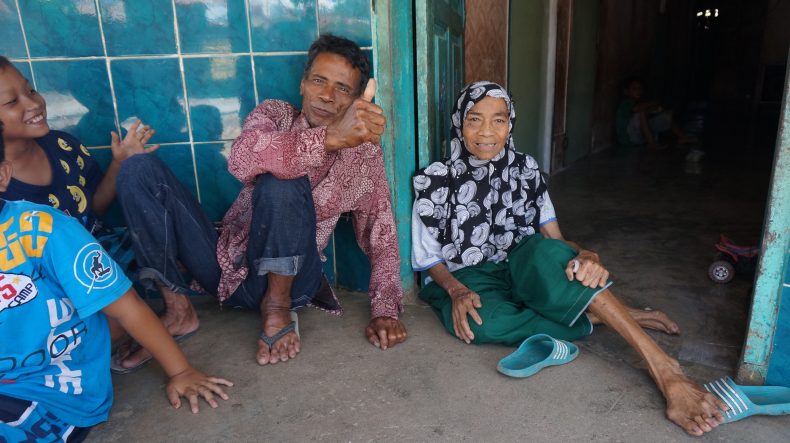 Local residents of a village on the way to the trail head were happy to discuss animist legends regarding the orang bunian and “magic” on the mountains. Photo by Gregory McCann.

Christianity, however, may have had more success in stamping out the last residual animist beliefs in its adherents. The people of Nias Island (an island off the west coast of Sumatra), I was told, are almost all Christians, and virtually every tree on that island has been cut down and every form of wildlife thrown into the cooking pot. In fact, Munthe explained to me that when Nias Island Christians move to mainland Sumatra and build homes near forest areas, a major uptick in poaching and logging usually follows.

Troublingly, as we finished up our survey work and were driving back, we picked up some information about a Malayan tapir that had just been snared and killed by Nias Island emigrants. They knew they had done wrong and they had purportedly cut up the carcass and fled into the forest to cook and eat it. Munthe, a Batak Muslim who says his great-grandfather was “full animist,” was outraged by this and proposed going into the forest to pursue and apprehend the poachers, but as it was late and there were only two of us, I advised against it.

Could it be that Islam — which prohibits the consumption of not only pigs (and wild pigs are one of the Sumatran tiger’s main prey species) but also snakes, turtles, frogs, eagles, and many other species — with a twist of animism, is the perfect combination for wildlife conservation in Sumatra? As the Dutch historian Bernard H. M. Vlekke writes in his 1945 book The Story of the Dutch East Indies: “The forces of nature were venerated by the ancient Indonesians and the places where they worshipped remained unchanged throughout the centuries, even though new religions were introduced. The worship has been constant; only the gods have changed.”

Gregory McCann is Project Coordinator for Habitat ID, and author of the book Called Away by a Mountain Spirit: Journeys to the Green Corridor.

In Sumatra, animism lingers alongside Islam. That combination could be wildlife's best chance for survival.

Bali’s ‘Tolak Reklamasi’ movement echoes the consciousness of past injustices.

By Noto Suoneto and Gracia Paramitha

From deforestation to coal use, Indonesia was in the spotlight during the U.N. Climate Change Conference in Glasgow.