Taiwan has a migrant labor exploitation problem, as evidenced by a spate of protests that have occurred on behalf of migrant workers in Taiwan in recent months.

Negligence from employers and government agencies appears to run deep. Whether at sea or on land, migrant workers face the same problems: money illegally taken out of their pay by brokers and miscellaneous “fees,” contracts that have been forged or otherwise are not enforced in favor of employers, insincere attitudes and impotence from government agencies, lip service about human rights from authorities, and the occasional — but all too regular — report of physical or sexual abuse.

Last month, I reported on the slave-like conditions migrant fishermen are forced to endure aboard Taiwanese-owned distant water fishing vessels (several years ago Taiwan’s government decided distant water fishing vessels are out of their jurisdiction — however, they were very quick to prosecute migrant workers who mutinied). The fishing abuses are only part of the story. Migrant laborers, mainly from Southeast Asia, provide valuable services in all corners of Taiwan’s economy, and deserve equal protection under law as their Taiwanese employers.

They have grown tired of Taiwan’s systemic inertia, bureaucratic confusion, and policies enabling continued exploitation. They are protesting. They are finding their voices. And they are shouting.

Taiwan has a population of 23 million people and is rapidly aging. According to Trading Economics, only half of the population is employed and more and more are joining the pension system annually.

The economy is increasingly swinging away from manufacturing, shooting off into tertiary and service industries such as healthcare, software, games, and retail. The Taiwanese no longer want to assemble, dig, fish, clean, or change adult diapers.

According to Taiwan’s Ministry of Labor, approximately 676,000 migrant workers have stepped in to fill the vacuum in Taiwan’s economic foundation. They provide the food. They clean the offices. They take care of the elderly. They make the smart phones the Taiwanese are addicted to.

Taiwan’s Fisheries Agency reports approximately 26,000 migrant laborers work as fishermen (although U.S. statistics indicate the total is closer to 160,000, indicating 134,000 have slipped through the cracks and are at the highest risk of exploitation). Approximately a quarter million migrants work as domestic caretakers, based on MOL data. The remaining 400,000 work in various sectors including manufacturing, sanitation, and other jobs Taiwanese are reluctant to take.

The importance of Taiwan’s migrant laborers cannot be overstated.

An example: Taiwanese families must hire cheap migrant domestic caregivers to take care of their elderly and infirm. The healthcare system is so overburdened that the government can only allot meager stipends for domestic caretaking. Statistically there is a need for approximately 250,000 caretakers. Many women from Southeast Asia, predominantly the Philippines, have stepped in. These caretakers also represent one quarter million Taiwanese who have been freed up to participate in Taiwan’s higher value-added economy.

Bottom line: 500,000 jobs are created because of migrant domestic caretakers alone. Just think about how much that contributes to Taiwan’s GDP.

It is alarming that Taiwan’s government agencies are not taking this issue more seriously. 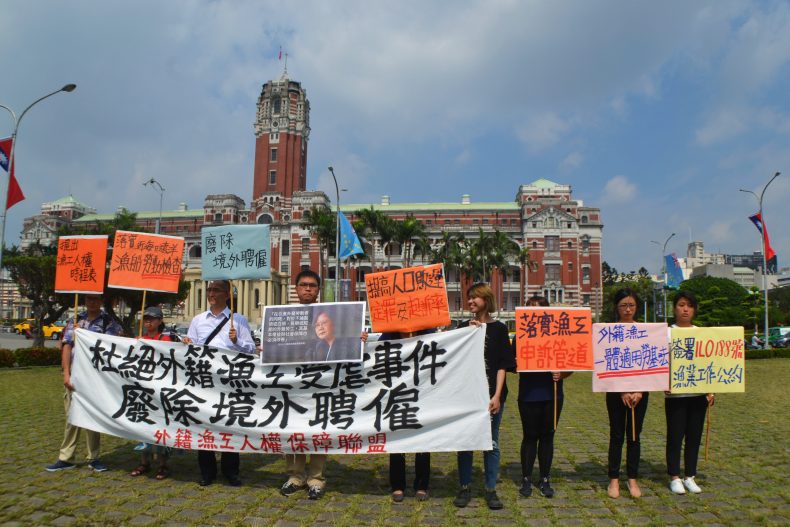 Human Rights for Migrant Fishers demonstrates in front of the Presidential Office Building (May 17, 2018). Photo by James X. Morris.

On May 17, a coalition of Taiwanese and International NGOs called Human Rights for Migrant Fishers (HRMF) held a rally and press conference near the Presidential Office Building in Taipei. The group protested on behalf of migrant fishermen who work as slaves to the system.

Some spend up to several years aboard Taiwanese-owned vessels at sea. They have to sleep in cramped quarters, may suffer verbal and physical abuse, have their documents confiscated and wages garnished, all while trying to support families back home. Their complaints are often ignored, and courts have ruled in favor of their employers. The verdict: you’re making more money than back home. Don’t complain.

HRMF brings attention to the fact Taiwan’s president, Tsai Ing-wen, is trying to court Taiwan’s neighbors in Southeast Asia in order to develop greater ties to regional actors and reduce Taiwan’s reliance on China, which claims the island as part of its territory. If Tsai wishes Taiwan to have good relations with its neighbors, then the government needs to protect its migrant workers, they argue.

On June 3 a group of factory workers, all women from the Philippines, gathered in front of Taipei 101, home of Google’s Taiwan headquarters, to protest the sale of HTC’s “Powered by” division to the internet giant. The factory workers had been hired by HTC to work in their “Powered by” section, and were facing layoffs.

HTC and Google were doing nothing to find them new jobs, without which they would need to return home and pay another round of broker fees to return to Taiwan to work. The layoffs were the last straw for the factory workers, who also complain of forged contracts, insincere adherence to contract terms by employers, and other labor violations.

“Human dignity” was a key phrase.

The event was organized in part by Serve the People Association (SPA), Migrante-International, with the support of the National Home-based Workers Union, Taiwan Association for Human Rights, the Trade Union of Electrical, Electronic and Information in Taiwan, and Youth Labor Union 95. 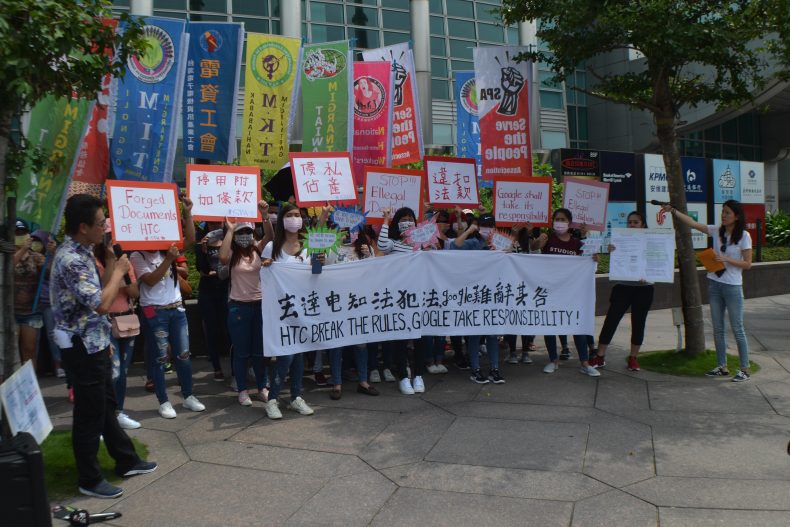 On June 10 migrant domestic caretakers from the Philippines, Vietnam, and Indonesia gathered outside the Ministry of Labor demanding their contracts be enforced. Due to the nature of their jobs they are on duty almost nonstop, rarely getting a single 24-hour period of time off despite their contracts and the law entitling them to it.

Protestors demanded a change to what they referred to as the “sweatshop of the long-term care system” in which long hours, little time off, and low pay (approximately US$670 per month) are common.

A representative from the ministry eventually came outside to hear the demands of the protesters. However, no resolution was made. The Ministry issued a statement that day; however, protest organizers Domestic Caretakers Union, and support organizations (including Serve the People Association, Taiwan International Workers Association, and Awakening Foundation)* feel that not enough is being done. 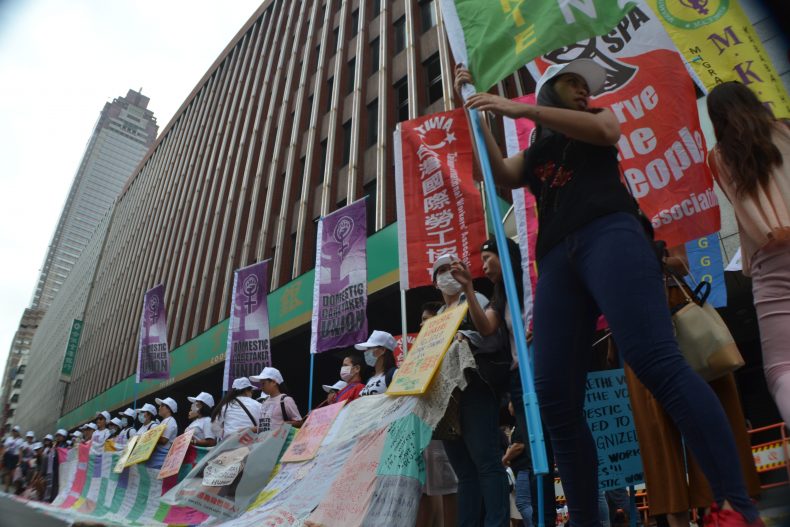 Domestic caretakers and NGOs demonstrate in front of the Ministry of Labor, Taipei (June 10, 2018). Photo by James X. Morris.

Many workers come to Taiwan because of its comparatively high pay, geographic proximity to Southeast Asia, ease of finding employment, and established brokerage networks. These men and women have young families of their own at home, whom they work nonstop to provide for. Many do not see their children for months or years at a time.

Taiwan prides itself as a liberal democracy and an advocate for human rights. It seeks to create stronger relations with its Southeast Asian regional neighbors at government-to-government and person-to-person levels.

If it is to realize this, it could start by enforcing its laws to the letter. This is why migrant workers protest, after all.

*The list of protest organizers and supporters has been updated after clarification from the DCU.

Terry Gou May Run for Taiwan’s President. What Does His Foxconn Record Tell Us?

Taiwan’s richest man is reportedly ready to declare his candidacy. Would he run the country like he ran his corporate empire?