The first line of the Warsaw metro started running in 1995. By 2018, the subway system in the capital of Poland consists of two lines and 28 stations. By comparison, the first line of the Delhi metro began operating in 2002 and as of today its network includes eight lines and 208 stations. The pace of the construction in the capital of India was spectacular, albeit not without a heavy toll, as the uncompromising manner and promptness of work led to many accidents and the deaths of a great number of workers. While this should not be overlooked, Delhi, one of the world’s most populous cities, eventually had a metro system it badly needed.

While its network keeps growing, the authorities have also recently decided to beautify some of the existing stations by adding artwork. During my last trip to Delhi (in June 2018) I toured some of the stations to see whether the art, as promoted by the state, matches the state-of-the-art technology of the metro.

Some of the stations, like Janpath or ITO, feature modern art. ITO, for instance, has been adorned with metal art panels above its escalators, including fancy solutions like a bicycle hanging from the wall. It is also clear that the stations (and their artwork) are meant to promote Delhi or India as such. A wall of the Janpath station now includes a decorative panel depicting Jantar Mantar, a famous 18th century astronomical observatory located in central Delhi. Beyond art, some other stations also promote Delhi by displaying information boards with photographs of nearby architecture highlights or other tourist attractions. For example, the Green Park station promotes the nearby hip area of Hauz Khas while Jor Bagh station tells us about the beautiful and historic Lodi Gardens.

Thankfully, the beautification of the stations and promotion of the city were not the only targets. When I visited, the Mandi House station presented an exhibition that gave voice to a serious debate on the life of manual scavengers in cities. The exhibition, entitled City of Waste, was prepared by a French researcher, Remi De Bercegol, and included photographs and stories of scavengers in Delhi and a few other cities (the exhibition ended on June 30). It is noteworthy that the Delhi metro – which can be showcased as a symbol of India’s rise to modernity and which fits well within middle-class visions of urban life – also decided to share the darker but equally human stories of the city’s underbelly.

Some other stations feature traditional or folk art. The corridors of the Lok Kalyan Marg station have been adorned with Tibetan thankgas, Rajasthani art, Punjabi folk handicraft, and many others, cutting through the diversity of Indian folk cultures. The INA station – which claimed the second spot in my personal ranking – was beautified with tapestry and glassed reliefs that depict traditional motives such as the life of god Krishna. 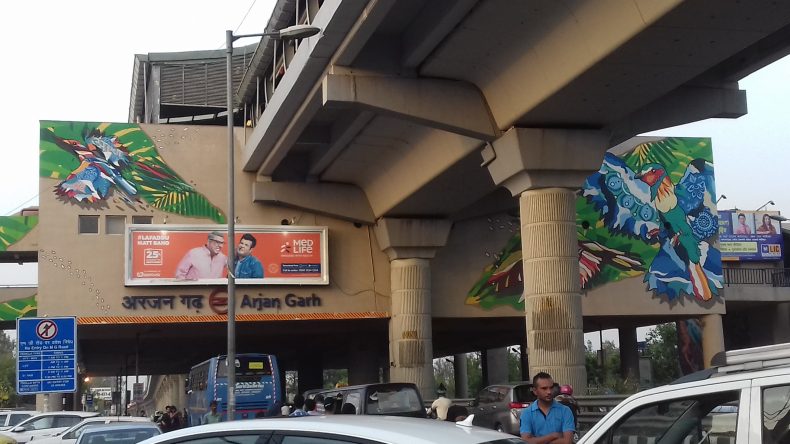 Artwork at the Arjan Garh station. Photo by Krzysztof Iwanek.

Yet, of the stations I have seen so far, it is the exceptional Arjan Garh that takes the cake. Located where the metro traverses the rock-sprinkled forests between Delhi and the upper-middle class satellite city of Gurgaon, Arjan Garh station is more outside of the city than within it. Still, it was worth to go there just to see its artwork. Elegant paintings of birds and deer on its inner and outer walls make the station look like an art exhibition with railway tracks in the middle. While the Mandi House station exhibition was prepared by a French citizen, the paintings at Arjan Garh are the work of two Singaporean artists, Soph O. and Sam Lo. A similar aesthetic facelift was offered to the Govindpuri station, which has been decorated with painting of wild flora and fauna by an Italian artist, Agostino Lacurci.

The last thing to note here regards startups involved in the decoration drive. It is natural that the processes involved Indian state institutions (such as the culture-promoting public trust, Sanskriti Foundation) but even here the cooperation has been very innovative. The India Habitat Center helps the Delhi Metro Railway Corporation in staging exhibitions; collaboration with the public literature-promoting body, Sahitya Akademi, led to the establishment of a bookshop with Indian literature at the Vishwavidyalaya station; and cooperation with the National Book Trust resulted in opening another bookstore at the Kashmere Gate station. Moreover, the centrally located and crowded Patel Chowk station houses a museum devoted to the history of the Delhi metro. International collaborations include the Institut Français (in case of Remi de Bercegol’s City of Waste) and the Singapore High Commission and the Singapore Tourism Board (in case of the Arjan Garh paintings). But what is also noticeable is the engagement of art promoting startups, such as the St+art India Foundation.

With 200-odd metro stations in operation in Delhi and their number growing all the time, the decorated stations are in the minority. Still, the whole initiative is nonetheless a commendable effort at crafting public spaces that not only serve the people but are also more beautiful and raise awareness or teach about history and folk traditions. 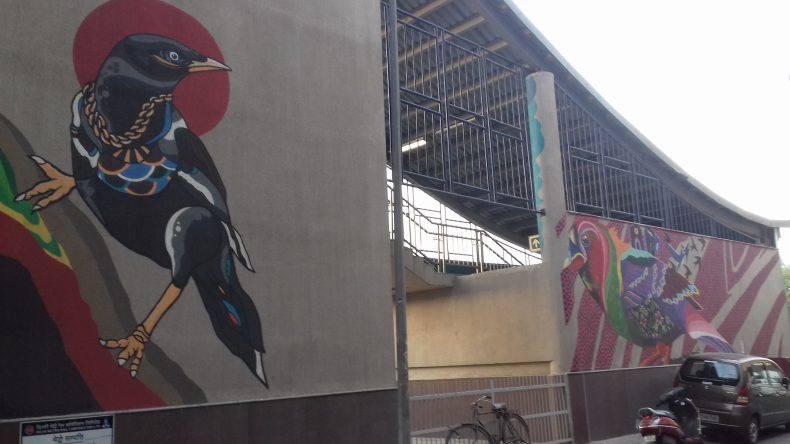 Artwork at the Arjan Garh station. Photo by Krzysztof Iwanek.

Meeting the Drivers of India’s Growth

The goods trucks symbolize a part of contemporary India as such, with all its strengths and weaknesses.

The Indian Heart: The Polish Singer Who Mastered Hindustani Music

Michał Rudaś is yet another foreign artist drawn to classical Indian music.

Virtually With Us: Looking for Gandhi on the Internet

Want to write a PhD about Gandhi? You can nearly do so without leaving your house.