In April 2018, a screenshot of a “leaked document” started circulating on Chinese social media – first posted on Tiexue, a Chinese online forum for military affairs, it was shared on various other outlets, while the original post is no longer available. It details the achievements of Zhu Xuejun, a chief designer of tactical weapons series at the China Academy of Launch Vehicle Technology, which is the First Research Institute of the China Aerospace Science and Technology Corporation. Read an English translation here (PDF). 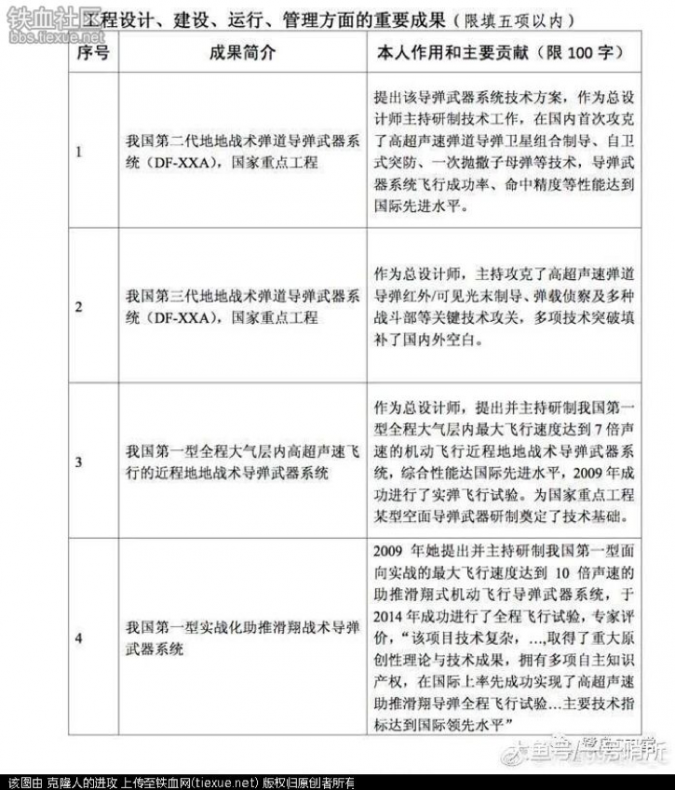 The document is allegedly a page from a nomination form for the 12th Guang Hua Science and Engineering Prize, a prize awarded by the Chinese Academy of Engineering. As such, it must be written before the nomination deadline of November 1, 2017. It lists four “significant achievements” of the nominee, of which the last one is the development of “China’s first operationalised boost-glide tactical missile weapons system,” which reached “hypersonic speeds of Mach 10, and conducted a full length flight test in 2014.” China conducted three HGV tests in 2014, two of which were successful.

Of course, one should not take the authenticity of this document for granted – Chinese social media is a hotbed of rumours and misinformation. I believe it is authentic for the following reasons.

First, the template matches with that of the official nomination form, which you can still download off the website of the Chinese Academy of Engineering. According to the website, the nomination process started in June 2017.

Second, Zhu’s name appears on the official nominee’s list of the China Association for Science and Technology, which was made public in November 2017. The list is no longer available on the CAST website, but remains accessible on the websites of other academies. While the “leaked” document never mentions Zhu’s name explicitly, it does refer to a “she.” The attribution to Zhu seems plausible, as she is the only female nominee who works in missile development.

Third, Zhu’s nomination form was never actually “leaked” – rather, it was publicly available from November 6-10, 2017, according to the CAST nominee announcement, as part of the nomination procedure. This “public airing period” was meant to offer peers a chance to comment on the nominee’s achievements. Indeed, you can confirm through WayBackMachine, which has a November 10 version of the CAST page saved, that there were hyperlinks to the completed nomination forms for candidates. These links no longer work, as CAST has removed the files from its website. Regardless, this offers a more plausible explanation as to how this document ended up on Chinese social media.

For these reasons, I believe that the page from Zhu’s nomination form is authentic.

The first question is whether the program Zhu worked on was the one that eventually produced the DF-17 – a missile system with a hypersonic glide vehicle that was first tested in November 2017. Obviously, the document does not refer to these tests since it was written before them, and as such, we cannot draw any conclusions. That said, the document’s language echoes that of The Diplomat’s article, which quoted U.S. intelligence sources describing the DF-17 as the first HGV system that is “intended to be fielded operationally.”

What we do know is that there is a HGV program for a “tactical” (战术) missile system — what does this means in the Chinese context? Based on how the PLA classifies its missile systems, it seems that “tactical” refers to the intended missions of a weapon system, rather than its range or payload. A “tactical” missile targets “important operational or tactical targets”; while a “strategic” missile targets “strategic targets.”

Considering that China official doctrine does not include tactical uses of nuclear weapons, it is tempting to infer that the program Zhu worked on is a HBGV with a conventional payload. This could mean a few thing — Zhu could have worked on the conventional variant of the DF-17, which is reported to be dual capable. It could also be a completely separate conventional HBGV program.

However, there is another possibility: we do not know who wrote this document, and the author could have been using “tactical” in another sense, such as a reference to the missile’s range. Given that this is only one data point, we simply cannot draw a concrete conclusion about the nature of the missile’s payload.

Ultimately, this document raises more questions than it answers. Having said that, if authentic – which I believe it is – this is the first semi-official confirmation of the existence of a hypersonic boost-glide missile system in China. Thus far, its coverage in Chinese media only draws on Western reports.

Raymond Wang holds an MA from the Middlebury Institute of International Studies at Monterey. The author would like to thank James Acton and Zhao Tong for their comments.

Editor’s Note: This article was updated to reflect the correct nomination deadline for the 12th Guang Hua Science and Engineering Prize.

Quest for ‘Super-Duper’ Missiles Pits US Against Key Rivals

The test brings the Avangard one step closer to becoming the first deployed HGV system anywhere.

A Networked, High-Tech Alliance Makes an Attractive Target for Cyberattacks

Increasing integration of technology and information among allies highlights the importance of cybersecurity – and fixing fundamental flaws.

Alfred Nobel, Technology, and the End of War

The namesake of the famous prize believed that more destructive weapons would make war unthinkable. Few people believe that anymore – but we have new delusions to contend with.