Mohammad Tahir Khedri returned home from his carpentry workshop in the evening of September 5. He had just made it home when his phone rang: A suicide bomber had shot dead the guard of a wrestling club and then blew himself up inside the gym.

Khedri, a 31-year-old father of four, rushed to the scene to help evacuate the wounded. He passed by a car packed with explosives that was parked nearby. The bomb went off.

“We found him dead in a hospital,” says Mohammad Ali, Khedri’s elder brother. “It was horrible and unbearable.”

Khedri was among 20 other civilians as well as two local journalists that lost their lives in the twin blasts in a Shiite-dominated area of the Afghan capital, Kabul. Seventy others were injured, mostly young athletes.

Sympathizers of the Islamic State (ISIS) claimed to have been behind the suicide bombing on the wrestling center in Kabul’s Dasht-e-Barchi. The neighborhood is home to many members of Afghanistan’s Shiite minority, who also belong to the minority Hazara ethnic group.

The wrestling center bombing was the latest brutal raid conducted against the Shiite community of Afghanistan by the Islamic State’s branch in the country. 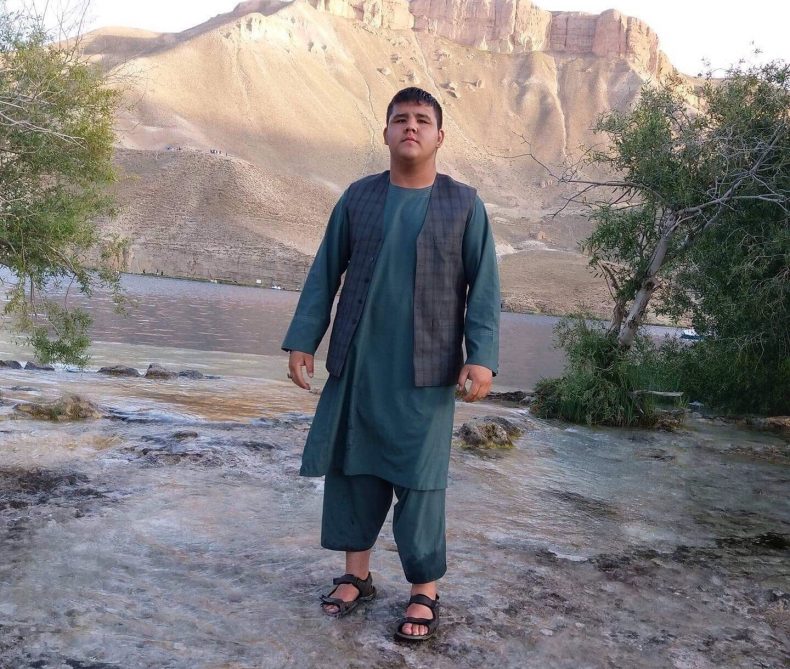 This family photo shows Mohammad Tahir Khedri, a 31-year old father of four killed in the September 5, 2018 bombing of the wrestling center.

“Daesh [the Islamic State], an extremist group, was formed mainly based on anti-Shiite agendas for taking over Shiite governments in Syria and Iraq,” Javed Kohistani, a retired general and political expert, told The Diplomat. He notes that Iran mobilized Shiite militias to fight against ISIS in Syria.

“Iran’s recruitment of many Afghans and creation of Fatemiom Brigade, which is entirely Afghan Shiites,” have pushed fighters of the Islamic State to seek revenge, he adds.

The Islamic State-Khorasan Province (ISKP) first emerged in Afghanistan in 2014 when NATO combat troops withdrew from the country. The group released a propaganda video that showed a number of jihadists declaring the Islamic State’s branch in the war-ravaged country.

Militants of ISKP gained strongholds in parts of eastern Nangarhar and Kunar provinces, near the border with Pakistan, where the Taliban group made some resistance against ISKP.

Two years later, in July 2016, the Islamic State carried out its first high profile attack against Shiites in Kabul, targeting Afghan Shiite ethnic Hazaras who were protesting. Twin suicide bombers ripped through the peaceful rally, killing over 80 and wounding more than 400.

Since the emerge of ISKP, the U.S. counterterrorism forces along with Afghan Special Forces have conducted large scale operations against strongholds of ISIS-affiliated fighters in Nangarhar province and elsewhere in the country.

The United States dropped the so-called mother of all bombs on ISKP’s sanctuary in the eastern part of the country. Over the last three years, U.S. forces and the Afghan government have confirmed the death of four emirs of the group. Hafiz Saeed Khan, the group’s first emir, was killed on July 26, 2016. His successor, Abdul Hasib, was killed on April 27, 2017. Four months later, on July 11, 2017, Abu Sayed, the next emir of the group, was killed in a U.S. airstrike in Kunar province. This year, on August 25, the U.S. military said that it killed Islamic State’s emir for its Khorasan province, Abu Saad Orakzai.

But for civilians, particularly residents of the Shiite neighborhood of Kabul, things have not changed much. On November 21, 2016, a suicide bomber affiliated with the Islamic State set off a bomb inside Baqir-ul Ulum Mosque, a Shiite mosque in the Dar-ul Aman neighborhood of Kabul. The suicide bombing killed 32 civilians, wounding dozens of others.

Nearly one year later, on October 20, 2017, armed men carried out an attack on Imam Zaman mosque, in the Dasht-e-Barchi neighborhood of Kabul. Worshipers had gathered for evening prayers when an initial bomber threw two grenades into the female section of the mosque, killing six women and injuring four. Later he blew himself up in the male section of the mosque. The attack on Imam Zaman mosque killed 65 civilians and wounded more than 40 others, including children. The Islamic State claimed responsibility for the attack.

Months later, as the country began preparing for the parliamentary elections in October 2018, the Shiite community of Kabul was hit yet again. People, including women and children, had lined up outside a voter registration center on the Sunday morning of April 22, 2018, when a suicide bomber detonated explosives, killing 57 and wounding 117 people.

Five of the dead were children; reportedly they were students at a nearby high school. The Islamic State claimed its fighter killed Shiites in the western part of Kabul.

The fast-growing list of high-profile attacks on the Shiite community has wreaked havoc and created an atmosphere of terror.  “Chaos, terror, and fear … is spread around the community,” says Mohammad Zahir Mohcini, a Shiite resident of Dasht-e-Barchi neighborhood. “People are being chased by attacks everywhere.”

He adds the attacks have pushed people “into a dark hole.”

Meanwhile, a public elementary school in Pul-e-Khushk area of Kabul’s Dasht-e-Barchi banned its students from carrying bags to school. “We have been told to not carry bags due to the fear of explosives in the bags,” Shukurllah, an elementary student at the school, told The Diplomat. “We carry plastic bags, where stuff inside is visible.”

The pervasive fear is not only about suicide bombings but also about the possibility of a big shift in the Afghan war. To this point the war has been political, not sectarian, but the Afghan branch of the Islamic State is trying to tip the war into ethnic or sectarian conflict.

“We have information, though not sufficient evidence, about efforts underway by regional countries, presumably Inter-Security Intelligence of Pakistan, aimed at promoting ethnic division among Afghans,” says Javed Kohistani, who has previously served as an officer in the Afghan intelligence community. “Pakistan or/and other regional countries support the Islamic State to carry out the attacks.”

On the other hand, he also highlights ethnic division among Afghan social media users, adding that failure of the Afghan government to protect Shiites has led them to believe there is a conspiracy between the Islamic State and the government. “You can notice very little sympathy of Pashtuns with victims of these attacks.”

“This shows that attacks have created lines between ethnic groups of the country,” Kohistani emphasizes.

Regardless of whether a lack of sympathy from Pashtuns implies that ethnic division has deepened, the fear and pains on shoulders of Afghan Shiites will take time to heal. Already the high-profile attacks have resulted in two separate cemeteries being established for victims of suicide bombings.

First, the July 2016 suicide bombing on the peaceful rally moved people to set up a separate cemetery, which is located on a nearby hill in Kabul’s Dasht-e-Barchi area. Four long rows of graves were prepared and over 80 victims were buried in the same graveyard. Later, a mile away, another hill turned into a cemetery for high school students that now sleep eternally next to each other as just they used to sit next to each other in school. 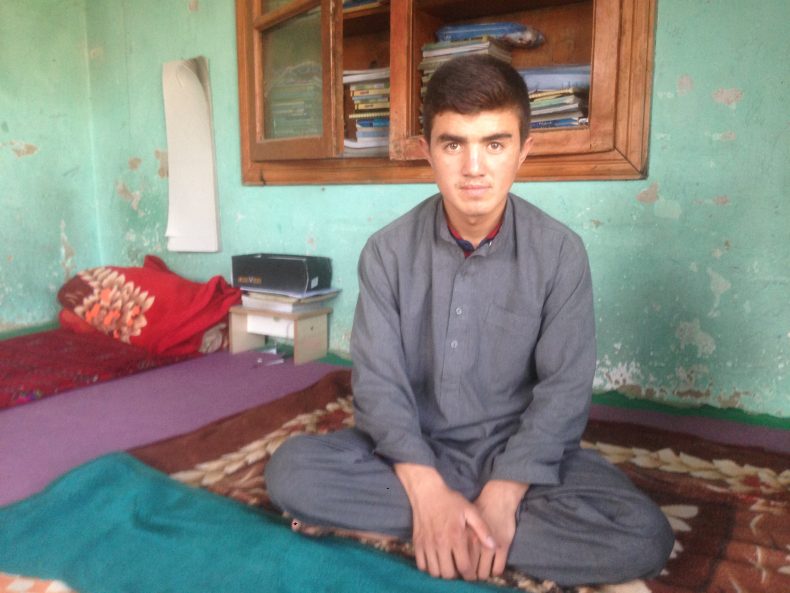 Ahmad Bahrami an 18-year student from Daikundi province, survived a bombing at his school. Photo by Ezzatullah Mehrdad

On the evening of August 15, a suicide bomber entered Mawoud education center, which specializes in preparing students between the ages of 16-20 for university exams.

“It was a break between two classes,” says Ahmad Bahrami, an 18-year-old high student who came from the central province of Daikundi to prepare for university exams. “I was watching football on my friend’s smartphone, thinking the phone exploded.”

He recalls that he lost consciousness: “I woke up and saw blown-up ceilings of the class… I searched for the phone. I couldn’t find it, neither [could I find] two of my friends.”

His friends’ names were on the long list of causalities of the bombing. Afghan officials put the death toll at 48 dead, confirming 67 others had been wounded.

“That night,” says Bahrami, “I could not sleep.”

Ezzatullah Mehrdad is a freelance journalist based in Kabul. His work has appeared in Global Voices, the Afghanistan Times, and the Kabul Times.

In early April, Afghan forces captured the latest head of ISKP -- but will it matter?

Death of a Caliph: The Islamic State in Khorasan Province After al-Baghdadi

ISKP continues to pose a real threat to Afghanistan, despite al-Baghdadi’s death.

The Peculiar Presence of the Islamic State in Kunar

An opaque offshoot of the self-declared Islamic State in one Afghan province displaced thousands of civilians.