LASHKAR GAH, HELMAND, AFGHANISTAN – Like many other Afghans, Satnam Singh rides on a bicycle to work in his hometown of Lashkar Gah, the capital of the southern Afghan province of Helmand; that’s what he was doing on one day in early summer 2018.

“But that day, a man on a motorcycle deliberately hit me and I fell,” Satnam recounts. The reason that he got knocked over was apparently because the style of his turban clearly shows that he belongs to Afghanistan’s Sikh minority, members of a religion that has its center in India and Pakistan.

The incident might be small, but the seemingly never-ending nature of such harassment is – together with more serious threats and the dire economic situation – one of the main reasons that almost all Sikhs have left Lashkar Gah. In fact, as of summer 2018, only two Sikhs remain in Helmand, which is considered the Taliban’s heartland. The province is where U.S. and British forces suffered the highest casualties during the long Afghan war’s latest ongoing chapter, which started with the U.S.-led intervention after 9/11.

The Sikhs have always been a small but native minority in Afghanistan; according to one account, prior to 1992, there were about 220,000 Hindus and Sikhs in Afghanistan with another putting that number as low as 50,000. By now, the very few remaining are concentrated in the provinces of Nangarhar, Kabul, and Ghazni.

Until a few years ago, there was also still a tiny community of Sikhs in Lashkar Gah. During the Taliban regime in the 1990s, about 60 Sikh families were living in Lashkar Gah, Satnam remembers. They held out there despite the extremist Islamist rule of the Taliban, who forced non-Muslim Sikhs to identify themselves by wearing yellow patches. Satnam asserts though that, while the time under the Taliban was tough for Sikhs, things were worse in the preceding civil war – and the situation is also worse now. This was corroborated by other reports citing Afghan Sikhs.

Hence, the exodus of Lashkar Gah’s Sikhs only began after the overthrow of the Taliban regime by the U.S.-led intervention, which was supposed to bring greater freedom for all Afghans, including minorities. “Since 2001 many left. And about three years ago, almost all of the remaining around 30 families of Sikhs decided to leave together,” Satnam said during an interview in July 2018. Virtually all of them, like the Afghan Sikhs that had emigrated before, went to India. “About two years ago, I sent my wife and daughter to my father-in-law in Kandahar [the capital of the neighboring province with the same name] and about a month ago from there to my father in India,” Satnam added. By now, he and his friend and neighbor Charan Singh are the only two Sikhs left in Lashkar Gah.

When asked why all the other Sikhs, including his family, had left, Satnam’s first reply is, “It is the harassment by the people.”

“They throw stones at our houses, smash windows, and spray nasty graffitis on our walls,” he continues. Those allegations are proven by the dents and washed out scribblings on the wall of the house in a sleepy dusty street, where Satnam and Charan live and where they renovate the last remaining Gurdwara (Sikh place of worship) in Lashkar Gah. Such continued harassment is also confirmed by a 2017 report from the U.S. State Department, showing that the (albeit limited) freedom of religion that the Afghan constitution guarantees exists on paper, but hardly in reality.

“And this harassment is not done by Taliban, but by ordinary local people,” Satnam adds, voicing desperation about the fact that he and his fellow Sikhs are treated like unwanted strangers in their own birthplace. Slowly, over time, this has become intolerable.

“We have complained to the police about this, but they cannot prevent it,” Satnam alleges. This was contested by Mohammad Zamon, the spokesman of the police in Helmand: “There are no problems between the Sikhs and other residents of Lashkar Gah. And if there should be any, the Sikhs can call the police and the police will – as in the case of any other resident – help them.”

In view of the aforementioned damage, however, this sounds like whitewashing the problems of Lashkar Gah’s last Sikhs by a police force that arguably needs almost all hands on deck to keep the insurgency at bay.

In any event, Satnman also indicates many other issues that Sikhs face. For example, they would not be able to cremate the bodies of deceased Sikhs, the usual funeral method in their religion, as their Muslim neighbors see this as a sin.

There are also threats. One letter that Satnam received demands all remaining Sikhs to pay a tax for non-Muslims and threatens that “bad things” will happen otherwise, with the original Pashto language implying that this is a death threat. The letter was sent in the name of insurgents, but its authenticity is unclear.

The fact that on July 1 a suicide bomber specifically targeted Sikhs in an attack in Jalalabad, the capital of the eastern Afghan province of Nangarhar, that killed at least 19 people (most of them Sikhs) and wounded 20 more, shows that threats have to be taken very seriously. It should be noted, though, that said attack was claimed by the self-declared Islamic State, a group that is known for much more ruthlessly targeting civilians and religious minorities than the Taliban. Hence, as the self-declared Islamic State has no known presence in Helmand, such an attack against Sikhs appears significantly less likely here than in Nangarhar.

Another Afghan and member of the (Muslim) Hazara minority that is also targeted by extremists summed up how bad the overall situation for the Sikh in Afghanistan is: “To be a member of a minority in Afghanistan is hell; but to be a Sikh means being in the innermost circle of hell,” he said. 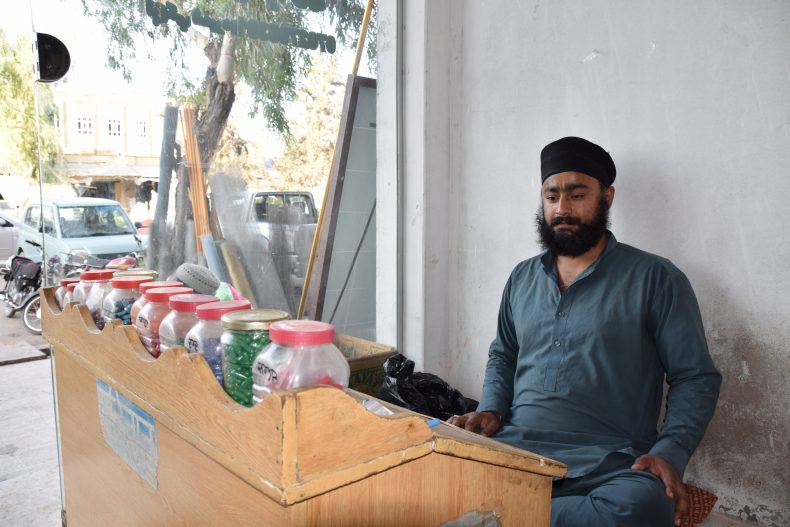 Satnam Singh, one of the two last Sikhs in Lashkar Gah, in his herbal medicine shop in his hometown. Photo by Franz J. Marty.

Another reason for the Sikh exodus is the dire economic situation, which was also noted by the 2017 U.S. State Department report. “I left Lashkar Gah for India about two and a half years ago,” Atar Singh, another Sikh who was visiting Lashkar Gah in July 2018, told The Diplomat. “The reasons were the war, the harassment, and the fact that there was no work,” Atar, who used to be a cloth seller in his native Lashkar Gah, added.

The importance of this economic component becomes clear from the explanation for Atar’s visit. “I came back to Lashkar Gah to see whether I can return and set up shop again here,” he said. “The life in our exile in India is very difficult. We barely find any work to support our families and, although we are refugees, we don’t receive any help from anyone. This is why I wanted to come back. But unfortunately the rents for shops in Lashkar Gah are high and the market in general is down. So I can’t move back here.”

This was corroborated by Satnam, who sells herbal medicine in his small store in Lashkar Gah: “Work has become very bad. However, the work here is still better than in India, where I wouldn’t know what to do. So I stay.”

Asked whether he would leave Lashkar Gah, if there was an alternative – another place where he could live and work – Satnam answered evasively. First, he said that there is no good alternative. When pressed again, he replied: “I will stay in Lashkar Gah until there is absolutely no possibility any more to do so.” Although he never stated this explicitly, one main reason Satnam is still holding out in Lashkar Gah is apparently that he simply does not want to leave his home, the place where he was born and grew up.

Echoing this, Atar, who – not without pride – mentioned that he had served seven years in Afghanistan’s army in the 1980s, at one point melancholically said: “This is our homeland too.” That’s a fact that many of their Muslim neighbors seemingly ignore.

But with only Satnam and Charan remaining, there is a very real danger that the Sikhs will disappear from Lashkar Gah and – even though there are still Sikh communities in places such as Ghazni, Kabul, and Nangarhar – maybe also from Afghanistan as a whole, especially as those other communities are not that numerous anymore. The U.S. State Department report from 2017 cited estimates that there are only 245 Sikh and Hindu families with about 1,300 individuals left in Afghanistan.

However, Satnam has not yet lost all hope. “I hope that the situation will become good again. Then, other Sikhs might return. After all, some of the ones that left did not sell their houses, but have only rented them out.”

Franz J. Marty is a freelance journalist based in Afghanistan. He writes on a broad range of topics, but focuses on security and military issues. Follow him on twitter: @franzjmarty.

Taliban 2.0: The End Game for Afghan Sikhs and Hindus?

By Visakh Mathews and Sukanya Bali

Sikhs and Hindus have lived in Afghanistan for generations, but the end of that era is near.

Afghan Lives Matter: What Price Would Afghans Have to Pay for Peace?

“They have handed our country the way you hand over a book or a bottle of water... We were happy for the war to end, but we didn’t expect the end to be like this.”

Even as officials continue to talk peace, violence has surged in Afghanistan.